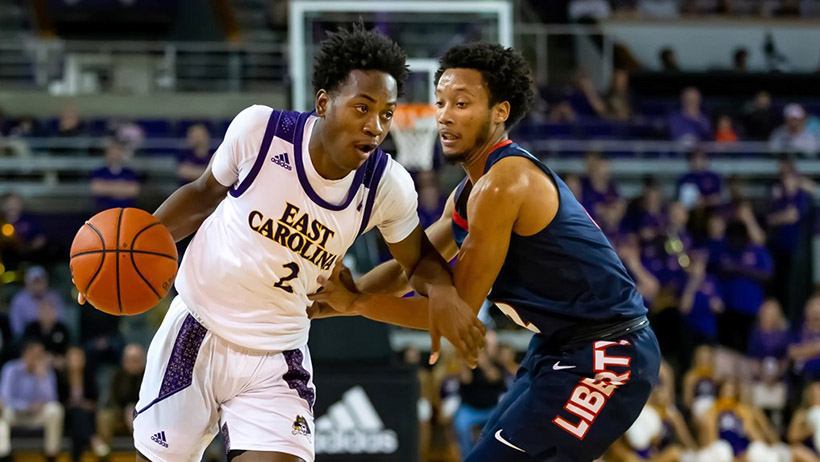 NASSAU, Bahamas     East Carolina opens its three-game stint in the third-annual Islands of the Bahamas Showcase against Evansville on Friday, Nov. 22, at 8 p.m. (EST) inside the Baha Mar Convention Center. It'll be the first of three games over the weekend.

The Pirates (1-3) enter the tournament on a three-game losing streak following a 77-57 loss Saturday to 2019 ASUN champion and 2020 preseason favorite Liberty, who is also in the field but on the opposite side of the bracket.

Evansville (3-1), which toppled No. 1-ranked Kentucky in Lexington last week, is coming off its first loss of the season Monday falling at home to American Athletic Conference member SMU, 57-55.

"This will be a good test for our guys," Pirate head coach Joe Dooley said. "We're going against a good Evansville team, whose off to a great start this Friday night. They played very well against Kentucky and obviously shot the ball well. That probably gave them a lot of confidence."

The Pirates will open the tournament with its first matchup against the Purple Aces since an 81-58 win in 2013 during the CIT semifinals. Prior to that, the only other meetings occurred in a home-and-home series in 1998 and '99 with Dooley directing ECU to an 82-79 victory in Greenville in 1998.

While this will be the fifth meeting between the Pirates and Purple Aces, it'll be the first for ECU freshman Tristen Newton and his older brother Juwaun, who is a sophomore at UE. Both players have started all four games for their respective teams this season with the younger Newton outscoring his older sibling, 9.8 ppg to 2.3 ppg.

ECU sophomore Jayden Gardner is one of five players nationally that currently averages 20 points and nine rebounds per game. He's posted two doubles-doubles this season, scoring more than 25 points in each of those games. Freshman Brandon Suggs is the only other Pirate to average double digit points at 11.0 per game.

The Purple Aces have four players averaging double figures led by 6-foot-9 sophomore DeAndre Williams with 17.5 points per game. K.J. Riley (18) and Sam Cuncliffe (17), who combined for 35 point in the win over Kentucky, rank second and third with 11.5 and 10.5 points per game, respectively. Charlotte native Artur Labinowicz is fourth with 10.3 points a contest.

"They've played small quite a bit," Dooley explained. "They've played four guards and shot a lot of 3s as you seen. We'll have to be able to adjust and plat small some of the time, but also when we do play big, do some different things."

Each of UE's three Division I games have been decided by four points or less. In addition to their aforementioned nail biters with Kentucky and SMU, the Purple Aces claimed a four-point win at home over Ball State on opening night.

This will be the Pirates' first tournament outside the United States since 2010 when it ventured to the U.S. Virgin Islands to compete in the Paradise Jam.