ECU drops to 1-4 on the young season while VCU gets back to .500 and is now 2-2. east carolina university, ECU, VCU, final score, women's basketball, november 21, 2019
Home
Categories
Login 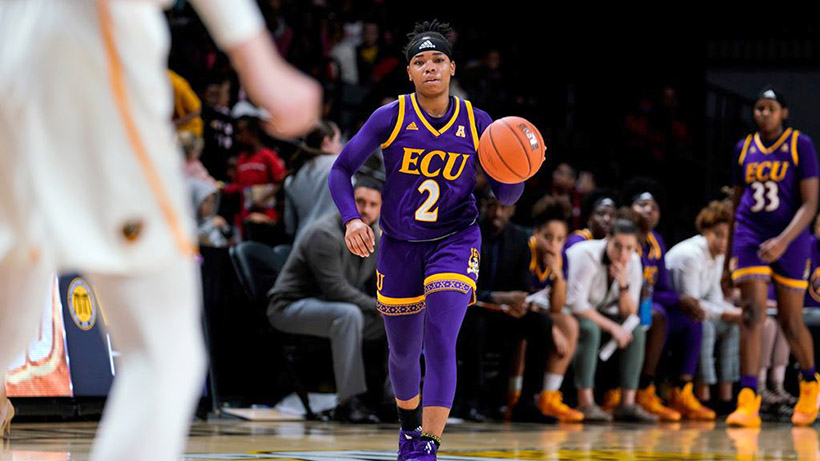 RICHMOND, VA.     Matched up against one of the best defenses in the country, the ECU women's basketball team could not get enough going to beat VCU on Wednesday afternoon, falling 53-40 in the Stuart C. Siegel Center.

The Pirates shot just 17-of-62 (.274) from the floor and 3-of-9 (.333) from behind the three-point line. Lashonda Monk was the only Pirate in double-figures, scoring 16 points and hitting all three ECU triples. Dominique Claytor led ECU with eight rebounds and three assists. ECU did its best to get extra possessions, grabbing 15 offensive rebounds and forcing 25 VCU turnovers. Monk had seven steals to lead ECU while Claytor had four.

The Rams had three players in double-figures, with Madison Hattix-Covington, Tera Reed and Danielle Hammond all scoring 10 points. The Rams blocked six ECU shots and outrebounded the Pirates 38-27. VCU did a good job of getting to the free throw line, taking 23 foul shots and making 16.

After a first half that had been controlled by VCU, two runs, one from each team, took up the majority of the third quarter. The Rams hit a three to open the second-half, giving them a 33-21 lead, but ECU began to claw its way back into the game. Jumpers from Taniyah Thompson and Xianna Josephs were sandwiched around a Hattix-Covington basket and then Monk took over. She picked off a VCU pass and made a layup while getting fouled, then made the free throw to complete the old-fashioned three-point play.

Two possessions later, Monk made another layup off a Thompson steal, cutting the lead to five.

However, ECU went cold at the worst possible time. After Monk's layup, ECU did not make another field goal until Ryann Evans made a layup with seven seconds in the quarter and scored only one point in that span. While ECU could not score, VCU rattled off a 9-3 run to end the third period, putting ECU in a 44-33 hole heading into the fourth.

The Pirates could not claw their way back in the final frame, shooting just 3-of-10 (.300) and scoring seven points. That allowed VCU to come away with the win despite the Rams only scoring nine points of their own in the fourth.

ECU will be back home in Minges Coliseum on Saturday afternoon to host Maryland Eastern Shore. The game will be ECU's Diabetes Awareness Game and will tip-off at 2 p.m. Tickets can be purchased here.