After two straight losses, the ECU women's basketball team will look to bounce back on the first road trip of the year as the Pirates head to VCU for a Wednesday morning matinee. east carolina university, ECU, women's basketball, VCU, gameday, november 19, 2019
Home
Categories
Login 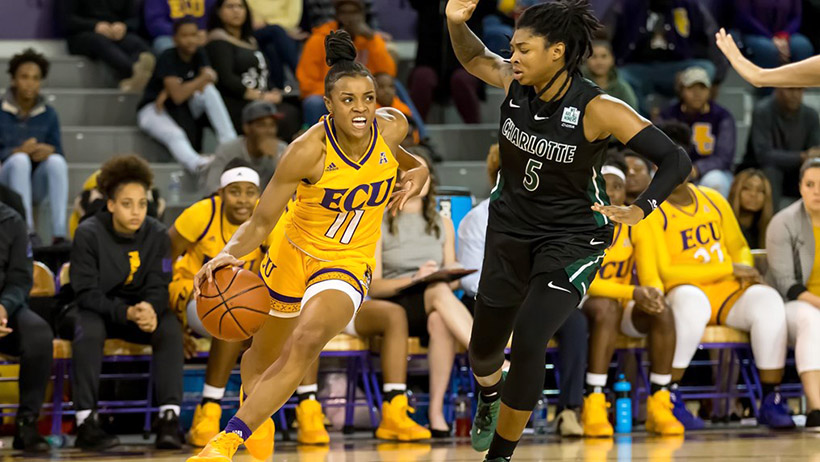 GREENVILLE, N.C.     After two straight losses, the ECU women's basketball team will look to bounce back on the first road trip of the year as the Pirates head to VCU for a Wednesday morning matinee.

ECU (1-3) is coming off a 59-47 loss to Charlotte, despite a season-high seven made three-pointers for the Pirates. Lashonda Monk led ECU with 17 points, tying her career-high with four shots from behind the arc, and is averaging a team-high 16.8 points. Monk is tied for eighth in the country in steals per game, averaging 4.67 a night. Dominique Claytor is tied for 25th in the NCAA, grabbing 3.67 steals per game and the team as a whole is fifth with 16.7 steals each night. However, the loss against Charlotte was the least productive for ECU on the defensive end, forcing just 23 49er turnovers and grabbing just seven steals. Taniyah Thompson is second on the team in scoring, averaging 15.5 points despite her three-game streak of reaching double-figures getting snapped against Charlotte. Raven Johnson leads the team with 8.3 rebounds per game and is also scoring 11.0 points per game.

VCU (1-2) is also on a two-game losing streak after dropping road games at Seton Hall and South Florida. The Rams have struggled to score, averaging only 51.3 points per game, including scoring just 33 points in a 53-33 loss at Seton Hall. Tera Reed leads the Rams with 12.5 points per game after being selected to the All-Atlantic 10 First Team in 2018-19. Madison Hattix-Covington (11.3 ppg) and Danielle Hammond (10.3 ppg) are also scoring in double-figures. Sydnei Archie leads the team in rebounding, pulling in 7.0 rebounds per game while Nyra Williams has a team-high nine assists. The Rams' strength at the defensive end has been altering shots, with the team averaging 4.3 blocks per game. Hammond and Sofya Pashigoreva have the two biggest parts of that, which each rejecting five shots so far.

Tipoff is scheduled for 11 a.m., on Wednesday morning. Fans can stream the game HERE or follow the live stats HERE.