A cold streak in the third quarter was too much for the ECU women's basketball team to overcome, as the Pirates fell to Charlotte 59-47 on Sunday night in Minges Coliseum. east carolina university, ECU, women's basketball, charlotte, final score, november 18, 2019
Home
Categories
Login 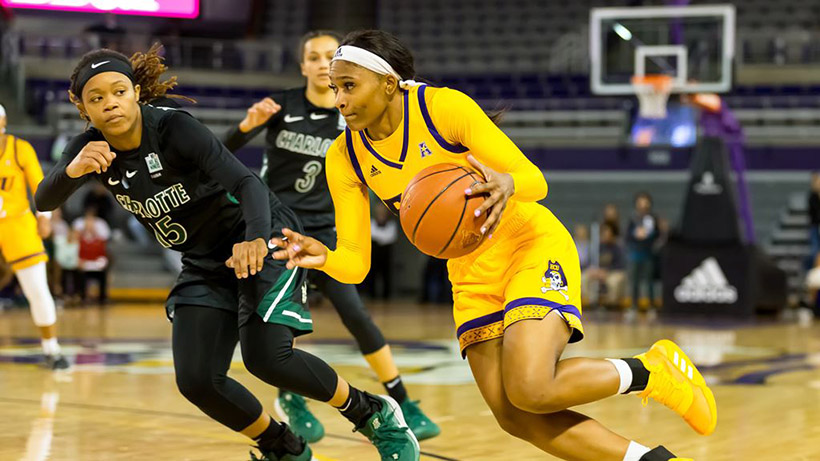 GREENVILLE, N.C.     A cold streak in the third quarter was too much for the ECU women's basketball team to overcome, as the Pirates fell to Charlotte 59-47 on Sunday night in Minges Coliseum.

ECU falls to 1-3 on the season while Charlotte stays perfect at 4-0.

Mariah Linney led the 49ers with 20 points, shooting 5-of-14 from beyond the arc and had a game-high five steals. Jade Phillips had a double-double with 17 points and 14 rebounds. Jazmin Harris rounded out a trio of Charlotte players with at least 10 points, scoring 10 points to go with eight rebounds.

ECU took advantage of three-pointers to take a 26-25 lead into halftime. ECU made five triples in the first 20 minutes (four by Monk, one from Hope), including Monk nailing one at the halftime buzzer. The junior guard had 14 points in the opening 20 minutes. On the other end, the majority of the Charlotte offense went through Phillips, as she shot 6-of-9 and had 12 points.

Linney started the second half by making a pair of three's for the 49ers. After a pair of Charlotte free throws gave the 49ers a 33-28 lead, Thompson answered for the Pirates, scoring five straight points to tie the game. However, after Thompson nailed a three-pointer with 7:26 remaining in the third period, ECU did not score again until Hope made a three with 1:08 to go. In that span, Linney made two more shots behind the arc, Phillips added a jumper, and Charlotte made two free throws for a 10-0 run. Hope's three ensured ECU went into the fourth quarter trailing 43-36.

In the fourth, ECU scored four of the first six points to cut the Charlotte lead to five, 45-40. Another 6-0 Charlotte run pushed the deficit back to double-digits however, and ECU never got closer than six the rest of the way.

ECU will be on the road for the first time on Wednesday when the Pirates play at VCU. It will be the second Education Day of the year for ECU, with tipoff scheduled for 11 a.m.


ECU Quotes     Head Coach Kim McNeil     Opening Statement: "It was a very good team out there, Charlotte. Very hard nosed, tough team. They played really hard and they do what they do well. They deserved to win the game tonight because they executed their game plan and we didn't. We will keep working, we will keep getting better. I will continue to say that the team we are now will not be the team that we are in January. As a staff, we believe in this team, we believe that we're setting a standard here for this program, and we'll keep pushing and challenging these ladies every day."

On Charlotte's 10-0 run in the third quarter: "They played a 2-3 zone against us. We weren't shooting the ball that well, and I thought we didn't do a good job executing against the zone. We got a little passive as far as trying to penetrate the gaps and create the easy shots for ourselves, so we were taking some really tough shots. Some shots that we had, with hands in our faces. I thought against Middle Tennessee, who also played a zone against us, I thought we did a good job of attacking and finding the gaps and creating for each other, whereas tonight I thought they were more difficult shots. They did a good job of boxing us out and limiting us to one shot. So. we were pretty much one-and-done for a while."

Junior guard Lashonda Monk     On the takeaways after the first four games: "Like coach said, I think we've just go to keep working, keep putting the little pieces together, keep being disciplined. Keep executing on defense and offense, I think we just have to buy into her program."

On her emotions after the game: "Of course, I wanted my team to win. I wanted us to win the past couple of games that we lost. I'm just very passionate about the game, so of course I am very emotional that we lost, but I'll get back after it."