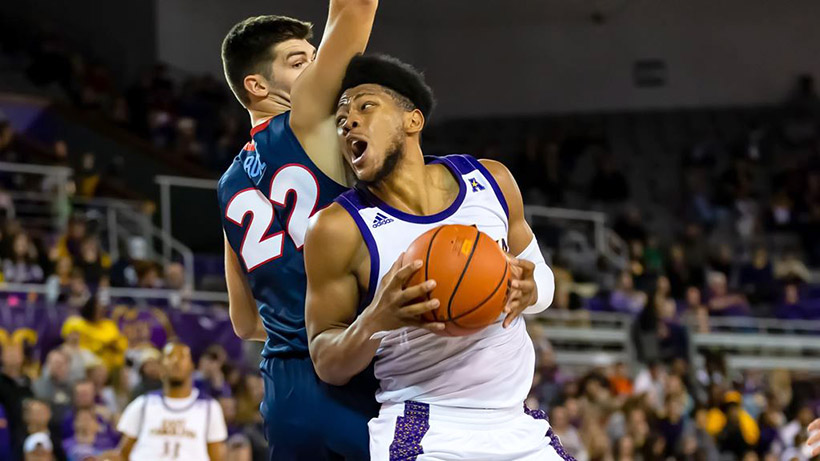 Darisu McGhee added 15 points for the Flames (4-0), who steadily pulled away from the Pirates (1-3) in the second half.

ECU was down nine midway through the first half, but pulled within a point, 22-21, with seven minutes remaining until halftime on a 3-point by Miles James. The Flames finished the half on an 11-6 run, capped by a 3-pointer from Kyle Rode just before the halftime buzzer to lead 32-26 at intermission.

Liberty wasted little time extending its lead to double digits as Scottie James, who sat most of the first half. with foul trouble, scored the Flames' first six points to go up 10 just over two minutes into the half.

Liberty started the half on 23-9 run and led by 20, 55-35, less than eight minutes into the stanza before ballooning to 23 late in the final minutes.

"They imposed their will from the beginning of the second half, all the way through the end," ECU head coach Joe Dooley said. "[I'm] disappointed in our lack of ability to bounce back. I think that we gave up so many easy shots. We gave up shots and they made them. I thought they just dominated the second half; we had no answer which was very embarrassing."

ECU allowed the Flames to shoot nearly 62 percent from the field in the second half, while it connected on 48 percent of its attempts. Liberty also sank 6-of-9 attempts outside the arc and finished 11-of-23 from 3-point range on the night.

"They have really good shooters and unfortunately we weren't able to run them off the line, especially in the second half," Gardner said. "They just ran their offense to perfection tonight."

Gardner led the Pirates with 26 points on 10-of-15 shooting from the floor. He also grabbed a game-high 11 rebounds for his second double-double of the year. Brandon Suggs added 13 and Tristen Newton 10.

ECU will return to action on Friday, Nov. 22, against Evansville in the first round of the Islands of the Bahamas Showcase in Nassau. Tip-off is scheduled for 8 p.m.