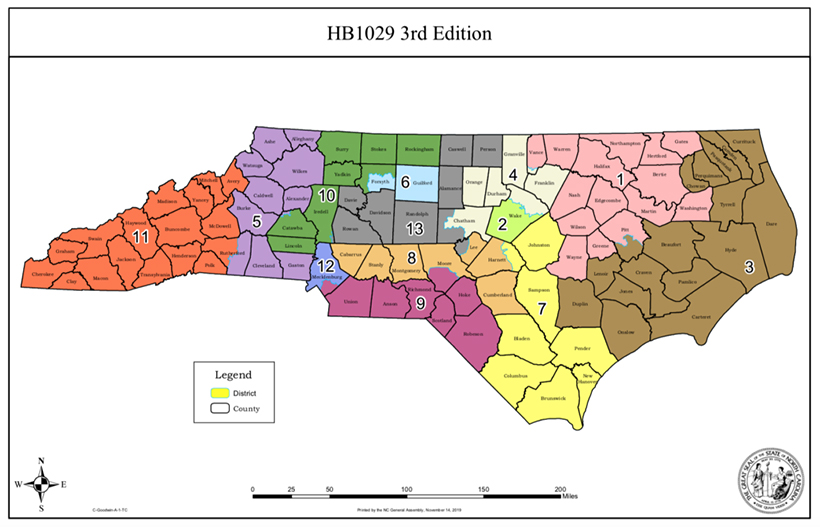 The state House has passed a new congressional map, giving Democrats a better chance to pick up U.S. House seats in 2020, based on recent voting history.

The new map in House Bill 1029 was proposed Thursday, Nov. 14, by House Redistricting Committee Chairman, Rep. David Lewis, R-Harnett. It was one of 20 proposals offered. It passed the redistricting committee 9-6, along partisan lines. The map also passed the full House 55-46.

The map will be considered Friday morning in the Senate Redistricting Committee and then move to the full Senate. If the Senate amends the maps, the bill will return to the House.

But if the Senate adopts the map without any changes, the General Assembly may adjourn until January. The House passed its adjournment resolution after adopting the map.

If the Senate embraces the House map, it will immediately become law, Lewis noted Thursday. The governor cannot veto a redistricting bill.

In 2018, Republicans won 10 of the 13 congressional districts even though the statewide vote for Congress was closely divided.

The three-judge panel in the Harper v. Lewis lawsuit hasn't ruled whether the existing congressional map is an unconstitutional partisan gerrymander. Instead, the court issued an injunction - in response to a complaint filed by plaintiffs - enjoining the current map for 2020 and encouraging the General Assembly to move ahead immediately with the redistricting process. The court suggested the plaintiffs would win at trial, and lawmakers moved forward hoping to prevent a delay in the 2020 primary, scheduled in March.

House Democrats, including Rep. Pricey Harrison, D-Guilford, opposed the final product while expressing appreciation for the effort Lewis made to include input from Democrats and the public.

Harrison said Lewis' map mirrored many of the districts the plaintiffs challenged. Lewis replied there are only so many ways to group particular counties, particularly in the eastern and western corners of the state.

Harrison also noted Lewis' proposal was based on a map introduced by Sen. Ralph Hise, R-Mitchell. The Hise map was based on a map drawn by a group of retired judges in 2016 for a redistricting event hosted by plaintiff group Common Cause. Common Cause had objected to having those maps used in the redistricting process, saying the exercise was meant to show what a fair process would look like, not to produce maps for an actual election.

Lewis said Democrats had been "inconsistent" about their definition of fair maps. Many had touted Common Cause's map-drawing process as "the way to go," only to reject it when Republican lawmakers introduced the map produced by that process.

In committee, Harrison proposed two maps. Both failed to get Republican support.

"I really appreciate the hard work on this, but I'm concerned about the transparency and feel we could address some of the problems cited in the complaint," Harrison said.

Lewis' map met traditional redistricting requirements more fully than the Democrats' did. Democrats' plans split more counties and Voting Tabulation Districts (a proxy for precincts). Lewis' map split only 12 counties and 19 VTDs. The other proposals divided more of both.

All 20 proposals would seem to give Democrats a better chance to pick up seats next year. Lawmakers couldn't use partisan data in their map-drawing exercise.

A WRAL analysis released Thursday shows that, based on the 2016 U.S. House race, under six of the Republican map proposals, Democrats would have won five of the 13 House races. Another two Republican proposals would have elected four Democrats.

The Democrats' map proposals would have elected either five or six Democrats, the WRAL study showed.


Contention over partisanship and transparency

Some members disagreed over creating districts which would force incumbents to run against each other, or double-bunking. The three-judge panel in the Common Cause v. Lewis legislative lawsuit allowed lawmakers to consider incumbency in their formulas. It wasn't clear if double-bunking would be an issue with congressional maps.

Members of Congress must be residents of the state they represent but they don't have to live in their districts. By contrast, members of the General Assembly must live in their home districts.

Rep. Deb Butler, D-New Hanover, said she supported unpairing incumbents, as long as it didn't lead to "partisan gerrymanders," which she said it did in this case.

"The buzzword 'gerrymander' gets thrown around," he said. "I will not be impugned as having drawn this map with regard to partisan gain."

Butler said she tried to follow the process from her home and said it was "maddening." Public hearings should have been held across the state and before any maps were drawn, she told Carolina Journal.

Harrison also said she considers the maps "largely not bipartisan," citing concerns about an unidentified House member taking several copies of maps out of the room and later returning to make changes.

Lewis said the entire map-drawing process was done over a public livestream and that members took public input both during Wednesday's hearing and through more than 1,000 online comments.

"[The legislature] is where the founders vested the responsibility to do this job because we are the closest branch to the people," Lewis said. "There has been a new precedent set in some of these court cases, and we've responded to it."