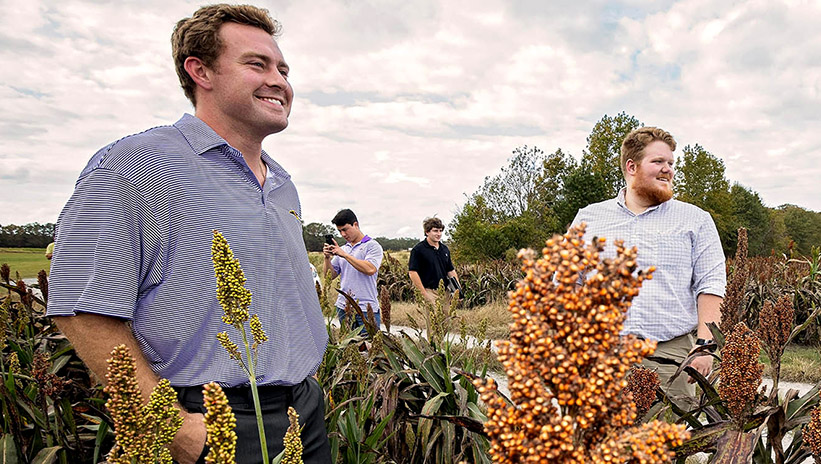 Students from East Carolina University’s College of Engineering and Technology look over a field at the Greenville Utilities Commission wastewater treatment plant. The students are working on a senior capstone project that is intended to help expand the efficiency of the plant. | Photos: Cliff Hollis

Holly Whitmyer is happy to be out of the classroom. She hasn't graduated from East Carolina University yet, but she is among seven students tasked with a real-world project that could help the environment as well as the Greenville Utilities Commission (GUC) and its customers.

"It's a real-life project. It's not something we do in the classroom," said Whitmyer, a senior environmental engineering major. "We're actually out here doing it."

The team is looking at a method of handling tertiary treated effluent - or water - from the wastewater treatment plant that would help wildlife, benefit the environment and extend the life of the plant, thus delaying the need for what would be costly upgrades.

"I'm very excited to be a part of this project," Whitmyer said. "I think it's a really good fit for my environmental engineering concentration. I enjoy the large group atmosphere. It's very work-like. It will be what I have to deal with in the real world." 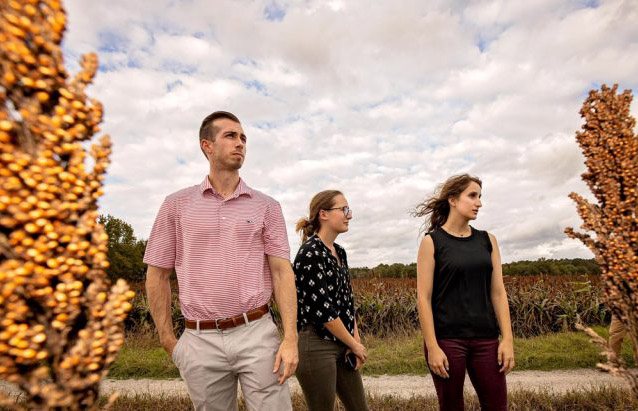 ECU students look over a field at the Greenville Utilities wastewater treatment plant.
For Jason Manning, superintendent of GUC's wastewater treatment plant and a 1988 ECU graduate, it's all about the math. The plant has a capacity of 17.5 million gallons of effluent per day. And as the plant gets closer to that capacity, a solution is needed to serve future customers. A plant expansion or new construction that could add 10 million gallons per day could cost $150 million, a price taxpayers and customers would have to pay.

The students are tasked with determining the feasibility of an alternative, taking between 1 million and 2 million gallons per day and using that as part of waterfowl impoundment pond on GUC property that would create habitat for birds and delay plant expansion. Such a plan could also help replenish shallow water aquifers.

On top of that, taking 1 million or 2 million gallons of capacity could clear the way for industrial development, with the plant having extra capacity to handle wastewater from a potential large employer.

"The longer we can put that expansion off, extend the lifecycle of what we have, fully realize the value of what we've already purchased, that will be better for everybody," Manning said.

Dr. Randall Etheridge, assistant professor in the Department of Engineering, serves as the team's faculty co-advisor on the project. "This has the potential to be big," he said.

Etheridge said the project could make a real difference not only in Greenville, but also with the students.

"They get to tackle a real-world problem with all the constraints that you face in the real world like finances, trying to fit things into property boundaries and permitting," he said. "It's real-world problems. That's the best way to describe it."

Dr. Natasha Bell, assistant professor of engineering who is the other faculty co-advisor on the project, said students see a big benefit from the senior capstone projects.

"What's special about capstone projects is that the students can connect to local industry and try to help them solve their engineering problems," Bell said. "It's a really great activity for the students because they get to experience a snippet of what they may be doing in the future. They're able to apply and be hands-on with everything and apply what they've learned over the last three to four years."

As part of the project, the students have to look at a variety of factors. As an example, Brett Greenway is focused on the pipe that would be used to pump the treated water to the site of the waterfowl impoundment pond.

"I've been handling most of the calculations ensuring that this pipe will suffice and deliver the amount of water we need once we determine how much water we need at the site," Greenway said. "Given that it's a 6-inch pipe, it's a fairly old pipe, and we have to make sure that the water we have to push out there, the pressure doesn't exceed what the pipe can handle. If it's not a big enough pipe, we have to size a new pipe and determine what would be a safe range."

Whitmyer, whose main jobs on the project involve permitting and economic analysis, said that although each student has a different task, they are all working together.

"We've taken an approach to make sure everybody knows what's going on," she said. "Since there are seven of us, we make sure there are multiple people on different parts of the project. We have a very team-like mindset. Everybody's willing to help each other out. We're very blessed to have a group where everybody gets along and it's very collaborative."

Manning said the students would also look at the effectiveness of a planned conservation easement involving the planting of 101 acres of trees that are designed to reduce the amount of nitrogen and phosphorus that could flow into the Tar River.

"We're trying to get a lot out of them," he said of the students. 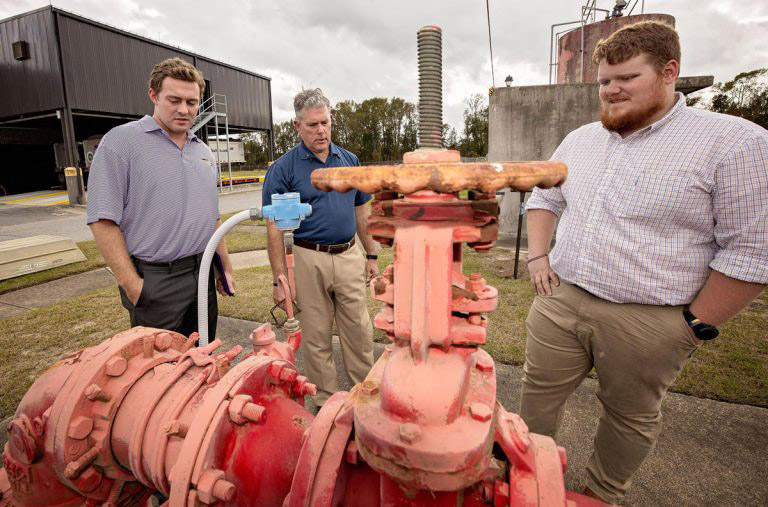 Jason Manning, center, superintendent of the wastewater treatment plant, gives ECU students a tour.
Manning said the capstone project is the second in which ECU students have worked on GUC's wastewater collection system. The first involved an engineering analysis of maintenance on remote pump stations.

"They came up with a scoring matrix to help me better determine where I needed to put more maintenance effort and make more maintenance investment," Manning said. "There's no telling how many hundreds of thousands of dollars that saved us."

He said GUC sees plenty of benefits from working with ECU.

"These students are working on things that I couldn't afford in my budget to go out and hire a consulting engineering firm," Manning said. "And what I've found is the capstone teams are much more responsive to our needs versus a brick and mortar engineering firm. It gives me a good opportunity to work with Natasha Bell and Randall Etheridge, the academia side, and get their input and their ideas for how we can better manage our plant process and plan for the future, so it's definitely a win-win for all of us."

Etheridge said such projects have the potential to benefit more than just the students and GUC.

"I think they're willing to try new things, and I think the partnership will allow us to work with them to test new things that can be implemented throughout the region to benefit the whole area, not just Greenville," Etheridge said.

Manning said he hopes to partner with ECU on more projects in the future.

Along with Whitmyer and Greenway, other students involved in the project include Morgan Ensley, Dawson Reese, Justin Rose, Cody Simonson and Madison Speagle. Their report on the project is expected to be completed in the spring of 2020.