Population Shifts Will Affect How ‘Representative’ New Districts Can Be 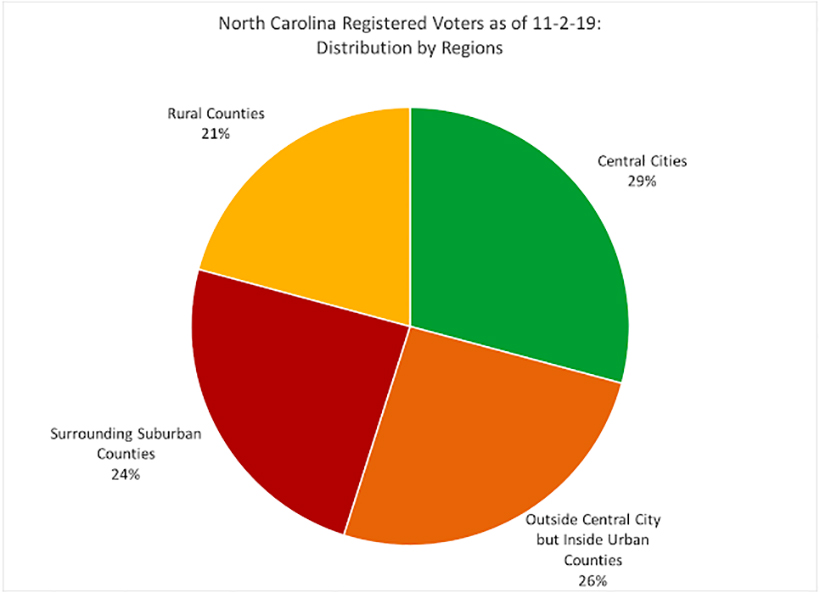 For several North Carolina counties, the General Assembly's new election maps may misrepresent the actual population counts by around 20%.

That's because lawmakers have to rely on 2010 census data until no later than 2021, when the next set of data is published. From 2010 to 2018, the state's overall population increased by a little over 848,000 residents, now totaling more than 10 million people, according to U.S. Census Bureau data and estimates. Over the past decade, the most dramatic population shifts occurred in several counties surrounding Charlotte and the Triangle area, in addition to several counties on the Southeastern coast.

As lawmakers weigh new congressional maps, redistricting experts suggest it's unclear whether the demographic shifts will benefit one political party over the other. The big takeaway is that North Carolinians are trending toward urban and suburban areas and away from rural ones, said David McLennan, political science professor at Meredith College.

Wake and Mecklenburg counties, which encompass the state's two largest cities, Raleigh and Charlotte, saw population increases of 21.2% and 18.9% respectively between 2010 and 2018. These estimates were based on U.S. Census Bureau population data compiled by Carolina Demography, a UNC-Chapel Hill population research team. Surrounding counties saw similar increases: Johnston rose by 20%, Cabarrus by 18.7%, Durham by 17.3%, Union by 17.2%, and Harnett by 17.0%.

Other residents poured into coastal southeastern counties. During the same 2010-18 period, population in Brunswick County shot up by 27.3%, Pender by 19.1%, and New Hanover by 14.6%, Carolina Demography's data show.

Other counties saw population declines, but not by nearly as much. The largest drops occurred in the Northeast: Northampton County dipped 11.0%, Bertie 10.6%, Washington 10.2%, Hyde 10.1%, and Edgecombe 8.0%.

The Great Recession may explain exploding growth in some beach counties, McLennan said. The recession, which wrapped up around 2010, left a lot of beach property on the southeastern coastline inexpensive and relatively undeveloped. Beach communities farther north were relatively built up, even pre-recession, he said.


Eyes on the suburbs

North Carolinians will have to wait for the next census to see exactly how population shifts will affect elections. For now, experts are eyeing the suburbs. Suburban areas have actually grown faster than central cities like Raleigh or Charlotte, McLennan said. Suburban residents also tend to have weaker party affiliations when compared with those from urban areas who typically favor Democrats and rural areas who favor Republicans.

As of this month, Democrats unsurprisingly dominate the state's central cities, comprising 47% of registered voters, compared with Republicans' 19% and unaffiliated voters' 33%, noted Michael Bitzer, professor of politics and history at Catawba College. In rural counties, Democrats comprise 39% of registered voters, although Bitzer notes that most in this group are older, white North Carolinians who often vote Republican. By comparison, 31% of rural voters are registered Republicans, and 30% are unaffiliated.


Old census data is not a new problem

This isn't the first time the state has had to redraw congressional districts in between census counts. North Carolina did it in 2016, 2002, 1998, and 1997, Bitzer noted in an email to Carolina Journal.

"Yes, the state has experienced dramatic shifts in populations," he wrote, noting that those changes won't be represented by the 2010 census data. "It's just a consequence that can't be overcome until the new count is done in 2020."