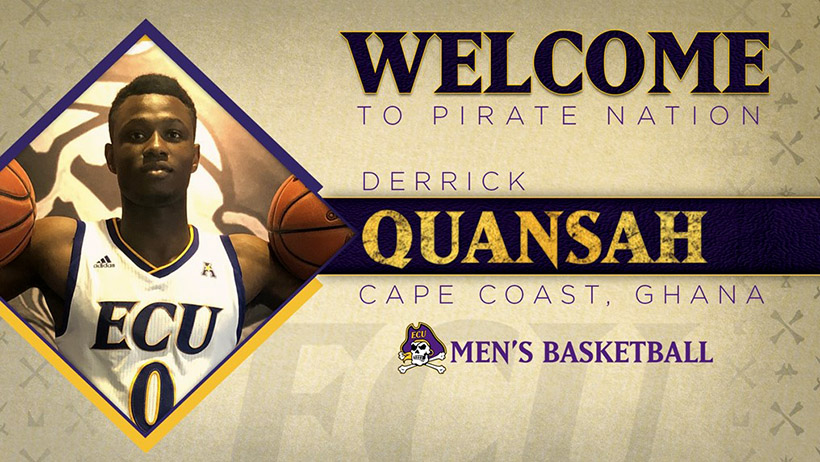 Quansah, who also goes by FiFii, moved to the United States in 2016 and attended Village Christian Academy in Fayetteville, N.C. for three seasons before enrolling at Hargrave Military Academy in Chatham, Va., for the 2019-20 academic year.

"We're very excited about [Derrick] and his potential," Dooley said. "He's a young player in terms of experience, but he's a fast-twitch guy that changes shots around the rim and can run. He's been very well-coached between Dwayne West and the Garner Road AAU program and Kurtis Darden (Village Christian) and onto Lee Martin at Hargrave.

"He's got a very high ceiling. He's going to have to get stronger, but he's already changed his body quite a bit. I think this year at Hargrave he'll continue to develop because he'll play against such high level players every day. The way he runs and jumps, with his youth, I think the sky's the limit."

With a 7-4 wingspan, Quansah helped Village Christian Academy reach the finals of the 2019 NCISAA 3-A playoffs.

WHAT OTHERS ARE SAYING


"He's what I call a no-maintenance guy because he loves the game. He's always ready to work and wants to be in the gym. FiFii is a coach's dream. He did exactly what I wanted and how I wanted. He is a great get for East Carolina because they're getting a kid that's more than just a basketball player."
— Village Christian Academy Head Coach Kurtis Darden


"This is only his fourth year playing basketball, but he has a knack for rebounding. He's a quick jumper and he rebounds the ball really well. Since he hasn't been playing that long he's still developing IQ wise and as a shot blocker. Tell him to go get everything that comes off the rim, he'll go get it."
— Garner Road AAU Coach Dwayne West


"He was a fan favorite at Village Christian, nobody wanted to see him go just because he's such a great kid. That's him as a person. As a basketball player his ability is through the roof. He's long and athletic, he's got a great body on him. He's still got a ways to go, but he's got the right mindset and work ethic to get there. You don't see that motor at seven-foot tall with that athleticism, wingspan and body composition often. His ceiling is unlimited."
— Hargrave Military Academy Head Coach Lee Martin