GREENVILLE, N.C.     Following an injury-filled season, the ECU soccer team will increase its depth by signing twelve talented student-athletes for the 2020 season, as announced by head coach Jason Hamilton on Wednesday.

"We are very excited about bringing in this talented group of freshman," Hamilton said. "We wanted this class to be larger to give them an opportunity to be mentored by the large rising senior class. This will help the program move forward when the rising seniors graduate. The experience this incoming class will get will be necessary for the future success of the program. We expect them all to push the returners and compete with them for playing time. There will be some very competitive races for playing time, which in the end pushes everyone in the program and makes us a deeper team." 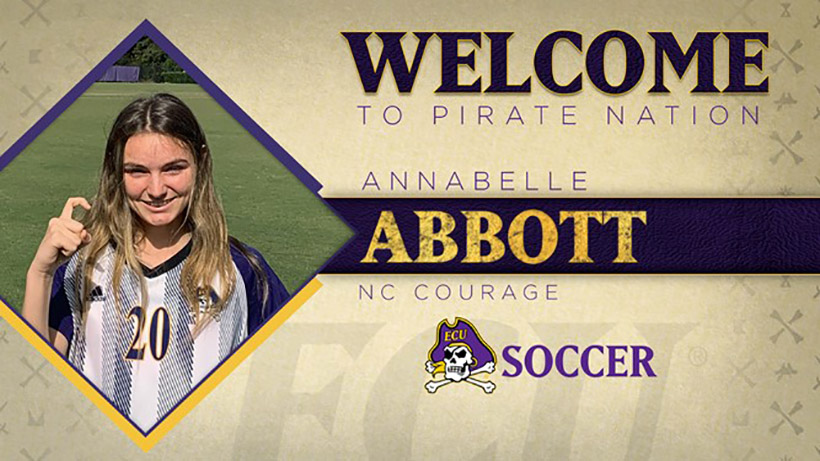 Annabelle Abbott spent the past three seasons playing for the NC Courage Development Academy for whom she has competed in the CASL Elite Clubs National League and the ECNL Champions League. Abbott helped NC Courage win the SRPL East Playoffs, the Region III Qualification, and the Adidas Labor Day Shootout. The Holly Springs, N.C., also has experience with UC Club Soccer, earning a spot at the id2 Training Camp, and with US Soccer when she was invited to the Market Training Center. As a freshman at Holly Springs, Abbott was the teams Offensive MVP and was named to the NCHSAA 4A First-Team All-Conference and All-Region teams as well as finishing runner-up for the NCHSAA 4A Conference Player of the Year. She is planning on majoring in Development or Pediatric at ECU.

Why Annabelle Chose ECU: "I chose ECU for the coaching staff and academic programs. Coach Jason, Brad, Emily, and everyone else involved were more interested in me as a person, a student, and not just only a soccer player for the program. ECU allowed me the time to make the right decision and was there for me every step of the way."

Coach Hamilton on Annabelle: "AB is in a really good environment that helps prepare players for the college game. She is a very good athlete that can play both as an outside back and wide forward. This will fit well with our system of pushing numbers forward with our outside backs. Having spent time both as a defender and an attacking player she is comfortable on both sides of the ball. She is quick and scrappy and will push to get on the field right away." 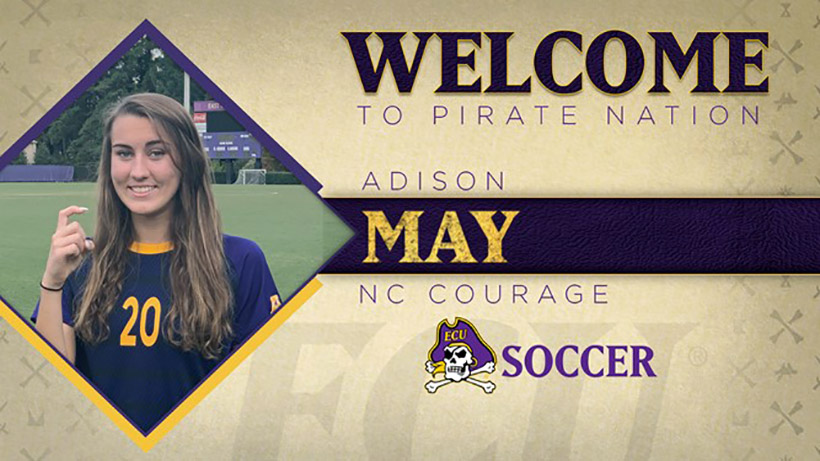 Adison May is a defensive midfielder who played for Heritage High School and the NC Courage during her prep career. During her three years with the Courage, she formed into one of the best players in the state of North Carolina, including being selected to the North Carolina Olympic Development Program (ODP) Sub-Regional Team and the Region III Camp. She was selected as a USYSA SRPL Region III Player as well as to the 2019 GDA Cup Team. May helped the Courage finish as NCYSA State Cup semifinalists and qualify for the CASL ECNL Champions League. May was a NAC 6 Academic All-Conference selection at Heritage High School and is planning on studying Exercise Physiology at ECU.

Why Adison Chose ECU: "I love the atmosphere of the school and all of the opportunities and support offered in both academics and athletics."

Coach Hamilton on Adison: "Adie joins current club teammate Annabelle Abbott from NC Courage, Adie has great size and a special range of pass for a holding mid. She is good at finding the ball and keeping her team in possession. If she can come in and play with a physical presence, she will have the opportunity to compete to fill one of the bigger holes created by our graduation class." 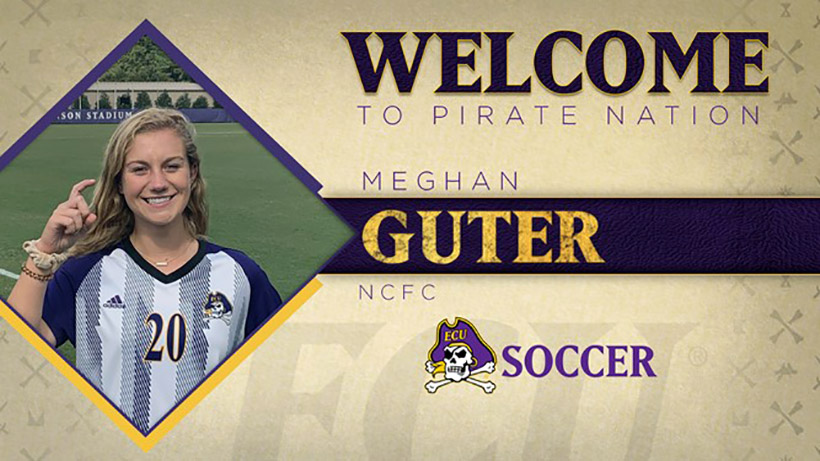 Meghan Guter is a native of New Bern, N.C., and has played for NCFC and New Bern High School. Prior to her time with NCFC, Guter played for PGSA for two year, scoring 15 goals to go with 24 assists. Guter is coming off a junior season at New Bern High School that saw her score 20 goals and pass out 24 assists on her way to being named to the All-State, All-Region and All-Conference Teams as well as earning Player of the Year honors. It was the second consecutive season she was named Player of the Year and the third straight season she had earned All-Region and All-Conference honors. Guter is planning on studying Exercise Physiology at ECU.

Why Meghan Chose ECU: "It was the best fit for me with academically and athletically."

Coach Hamilton on Meghan: "Meghan is someone that can play in multiple positions and we see as being a utility player that will fit in whatever then needs may be. We have seen her as a center back and a central midfielder and does a very good job at both. Meghan is a local girl that we saw quite a few times and each time we always had positive things to say. She has a very high soccer IQ and sees the game very well. Once she adjusts to the speed of the college game she should do very well." 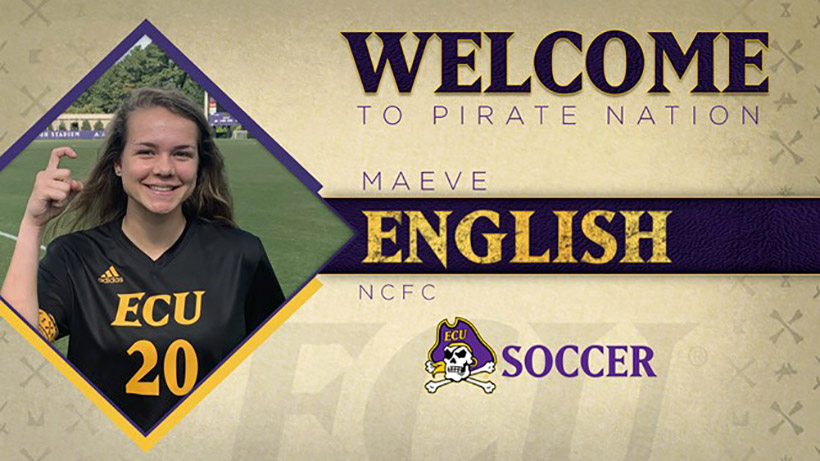 Maeve English is a local product, having played goalkeeper for D.H. Conley and for NCFC. English had an outstanding 2019 season, earning Defensive Player of the Year honors as well as being named All-State, All-Region and All-Conference. She has 44 career shutouts and 127 saves, good for 5.1 saves per game. While with NCFC, English has helped qualify for the Jefferson Cup and for the State Cup Final four. English is planning on majoring in Biology at ECU.

Why Maeve Chose ECU: "I chose ECU because I grew up going to the soccer games as a kid and couldn't see myself playing anywhere else. I was won over by the impressive coaching staff and the positive direction of program."

Coach Hamilton on Maeve: "A goalkeeper from right here out of Greenville, Maeve made the move with Meghan Guter to NCFC after both played for Pitt Greenville Soccer Association the past few years. Maeve is extremely athletic and has a very high ceiling as keeper. She has great natural abilities and has come a long way over the past year. She has a very high ceiling and we are excited to see her growth over the next few years." 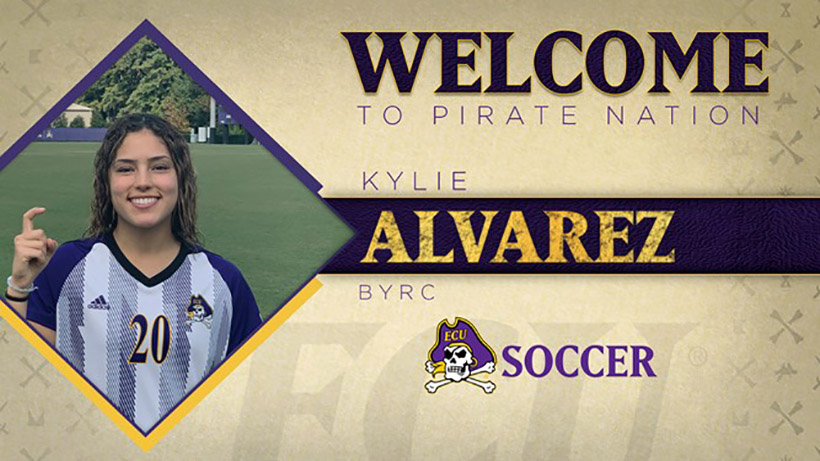 Kylie Alvarez is a product of South County High School in Lorton, Va., and BRYC Elite academy. Alvarez played with BYRC in both the 2018 and 2019 ECNL National Tournament as well as playing in the NPL National Tournament in 2015 and 2016. She was the Exact Sports ID Camp Spotlight Player in 2018 and was selected to the VYSA ODP European Team that played in Austria and Hungary in 2016. Along with playing for BYRC, Alvarez was a captain of the South County team during her junior season and was named Second-Team All-District in her sophomore and junior seasons. As a sophomore, she helped South County win is first ever District Championship and reach the state tournament. Alvarez is planning on studying marketing at ECU.

Why Kylie Chose ECU: "ECU provided me with the best balance of academics, athletics, and campus life. I was nervous during my first visit, but the coaching staff and players made me feel at ease and it became my most enjoyable college visit. I was very impressed with Coach Hamilton's ability to teach and mentor the players. The coaching staff was well synchronized and I knew that I could contribute to the program's goals. Although ECU is a large university, it still feels welcoming and accommodating."

Coach Hamilton on Kylie: "Kylie comes to us from BRYC out of Virginia and competes at the ECNL level. Kylie is another athletic outside back that will suit our style of attacking out of the back. She has the ability to get up the field and be involved in the attack. Athletically and physically she has the ability to come in right away and compete, she just needs to grow in the tactical aspects of the game to be well rounded and ready to help us right away." 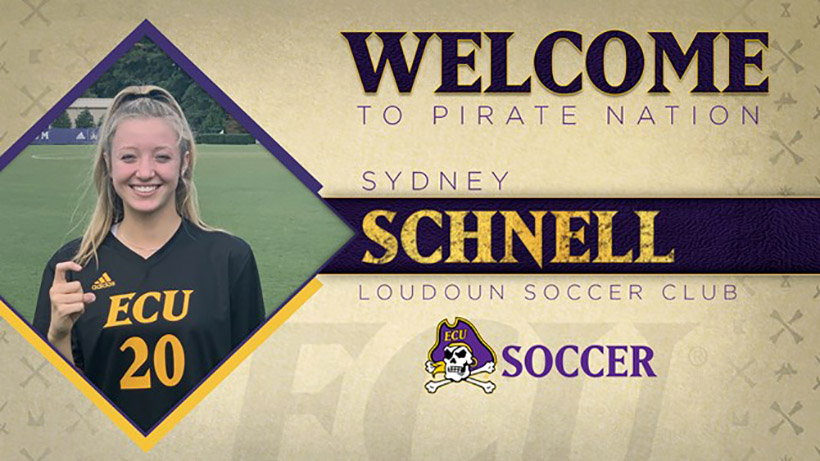 Sydney Schnell arrives in Greenville from Loudoun, Va., where she played for Loudoun County High School and for the Loudoun Soccer Club. Schnell was a prolific scorer for both her high school and club teams. She bagged 38 goals during her junior year at Loudoun County, earning 2019 Virginia Player of the Year honors. That came a season after she led Loudoun to a 2018 State Championships. For Loudoun Soccer Club, Schnell has been the team's captain for three years, scoring 33 goals and handing out 21 assists. She was named to the 2017 National Championships Best 11 team and has earned a spot in the ODP Region 1 Pool. She is planning on majoring in nursing during her team at ECU.

Coach Hamilton on Sydney: "A former teammate of current Pirate Taylor Kibble, Syd is technical player who is very comfortable on the ball," Hamilton added. "She does some of the little details very well and that's sets her apart from others. She will need to adjust to the physicality of the college game and once she does that she will fit right in with the direction of the program."