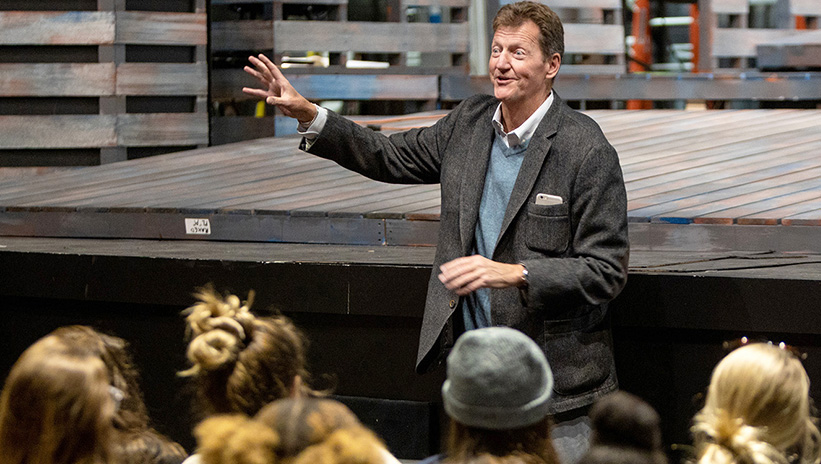 Alumnus and award-winning lighting designer Howell Binkley returned to East Carolina University's School of Theatre and Dance on Nov. 8 to visit with students and attend a scholarship fundraising gala.

Binkley's a two-time Tony Award winner with 40 years of experience and a founder of Parsons Dance Company, which he started in 1984 with his colleague and close friend David Parsons.

Binkley's an internationally recognized alumnus, said Jayme Host, director of the School of Theatre and Dance. "It's an incredible opportunity to connect with an alumnus who's had such a prolific career," she said. "He can inspire our students to see what's possible. He's so generous with his time and talent to mentor our students, and we're grateful for that."

He advised students to see as many shows - dance, opera, community theater, workshops and others - as possible. "To this day, I go at least five days a week," Binkley said. "You're not there to critique but to observe. It's your creativity you're nurturing and building on."

He also said the people students will meet along the way are important. "Write an email, write a handwritten note - I enjoy those. Don't be scared," Binkley said. "You learn by working with new people and going new places. If there are jobs you want to shadow, it's not coming to you. You've got to go to it."

A Winston-Salem native, Binkley started working in theater in about the eighth grade, helping load and unload trucks for productions on weekends at Reynolds Auditorium. "As a kid it was just fascinating," he said. In high school, he participated in theater camps for three summers at the North Carolina School of the Arts, which became part of the UNC System during those years. Binkley also became interested in industrial arts and drafting, thinking he would study architecture in college.

He arrived at ECU in 1974 and began making connections that would lead to his career today. "Coming here was the greatest thing that ever happened to me," he said. "It just opened all kinds of doors for me." 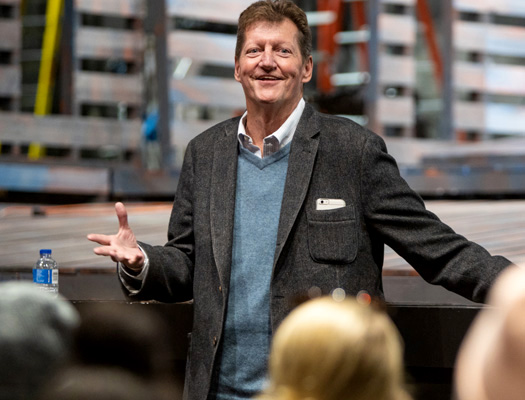 ECU students ask alumnus Howell Binkley questions about his career.
The Acting Company, founded in 1972 by legendary producer, director and actor John Houseman and producing director Margot Harley, came to ECU for a week. The professional theater company performed shows at night, and taught classes with students during the day. "It was amazing to see how this kind of machine worked," Binkley said.

He became close friends with the company's production crew and was offered a job in Saratoga Springs, New York, the company's summer home where they rehearsed and set the technical work for all shows they would take on the road. "I worked as an intern my sophomore summer making $35 a week." He also met New York-based actors, directors and designers, which introduced him to the New York scene.

After that he worked with the American Dance Festival, which had just moved from Connecticut to Durham.

One day, a professor asked Binkley what he wanted to do after college, but he wasn't sure. "He said 'I want you to pick one avenue to focus on. Come back and tell me.' I chose lighting," Binkley said. "I think if it hadn't been for that day... he put me in focus."

After ECU, he moved to New York and worked full time with The Acting Company, touring around the world for three years. He met Jennifer Tipton, who was principal lighting designer for the Paul Taylor Dance Company. After working with Tipton for several years, she encouraged Binkley to go out on his own. In 1991, he was asked back to The Acting Company to light a gala on Theatre Row in New York City.

Harold "Hal" Prince, the late producer and director associated with some of the best-known Broadway musicals of the 20th century, came to the gala.

The next day Binkley was called to meet Prince at his Rockefeller Center office. Prince asked Binkley to do the lighting for "Kiss of the Spider Woman." "Since then, I designed every show Hal did," he said.

"I get from one show to another by exposure," said Binkley, who as a lighting designer is hired by a choreographer or director.

After "Kiss of the Spider Woman," which put Binkley on the map, he did "Grease" with Rosie O'Donnell and "How to Succeed in Business Without Really Trying" with Matthew Broderick. In 1992, Binkley had seven shows running on Broadway.

Those shows led to many others, including "Jersey Boys," "In the Heights" and the blockbuster "Hamilton."

Binkley said his success has come from being part of collaborative teams, where directors ensure that all involved are on the same page. "The words I hate are 'can't' or 'no,'" he said. "As a lighting designer, it's all about what you do before a production opens - do the most prep work you can do. I spend as much time as I can at rehearsal. It helps your story too."

One of Binkley's latest hits is "Come From Away," about a small town in Canada that took in 7,000 airplane travelers diverted by the 9/11 tragedy. He also has three touring shows: "Summer: The Donna Summer Musical," Jimmy Buffett's "Escape to Margaritaville" and "A Bronx Tale."

After Binkley has designed a show, he said he goes about every three months to see them. Binkley's staff and each show's staff does a great job of managing the work. "It's amazing how they maintain the shows in New York and on tour," he said.

Binkley is expected back at ECU in May to speak at the School of Theatre and Dance commencement ceremony.