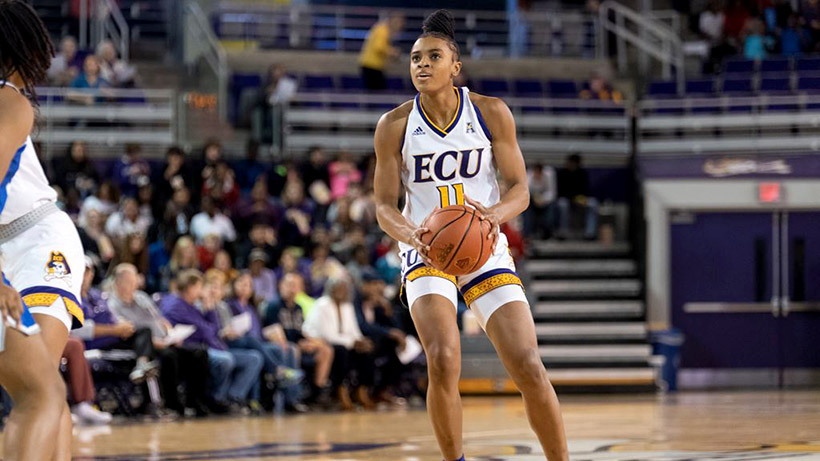 GREENVILLE, N.C.     Sharp-shooting was too much for the ECU women's basketball team to overcome as the Pirates fell to William & Mary 78-68 on Tuesday evening in Minges Coliseum.

ECU drops to 1-2 on the season while William & Mary stay undefeated at 3-0.

The Tribe shot 28-of-52 (.538) for the game, including a blistering 11-of-20 (.714) in the second half. Victoria Reynolds had a double-double, scoring 17 points and grabbing 12 boards. Eva Hodgson had a team-high 18 points to go with eight rebounds and six assists. Sydney Wagner (14 points) and Bailey Eichner (11 points) were both in double-figures as well.

After a first-half that went back and forth, finishing with William & Mary leading 41-38, the Tribe snatched control of the game in the third quarter. An 11-2 run over the first four minutes of the period gave William & Mary a 52-40 lead. Although ECU's offense began to pickup in the back half of the quarter, the Tribe offense did not slow down. William & Mary shot 10-of-14 (.714) in the third period and 5-of-7 (.714) from the free throw line to take a 67-55 lead with one quarter remaining.

Despite ECU holding William & Mary to just 1-of-6 shooting in the fourth period and forcing seven turnovers, the Pirates never got closer than eight points in the final stanza.

ECU will have a few days off before returning to game action on Sunday afternoon. The Pirates will host Charlotte at 5 p.m., in Minges Coliseum.

ECU Notes
ECU Quotes     Head Coach Kim McNeill     Opening Statement: "First, I'd like to give credit to William and Mary. They played a really good game, played extremely hard, played very disciplined, and at the end of the day, they just kicked our butts. Not a good night for us, obviously on the defensive end of the floor. We pride ourselves on being a defensive-minded team, and defensive-minded teams don't give up 80 points and over 40 points in the first half. So, we took some steps backwards, but we will get back in the gym on Friday and get back after it and try to get back on the right track."

On William & Mary's flow offensively: "It's very disappointing and downright embarrassing. We preach defense and we talk about that being our identity. We're not going to be perfect every night, but the amount of just open layups that they got, the amount of completely open shots that they got tonight is not who we're going to be, it's not characteristic of us. Like I said, we'll get back at it Friday, we'll work on it, and we'll get better."

On ECU vs. William & Mary series: "I think any game for us early in the season is going to be a good matchup. We're still learning, we're still implementing our system, we're still trying to get by, we're still trying to get a consistent approach to practice. Winning starts in practice, and when you take over a program and implement a new system, you're changing the culture and environment, it's going to take one day at a time to do that. We talk everyday about, "It has to start in practice", and so until we get a consistent effort in practice, we won't take steps forward."