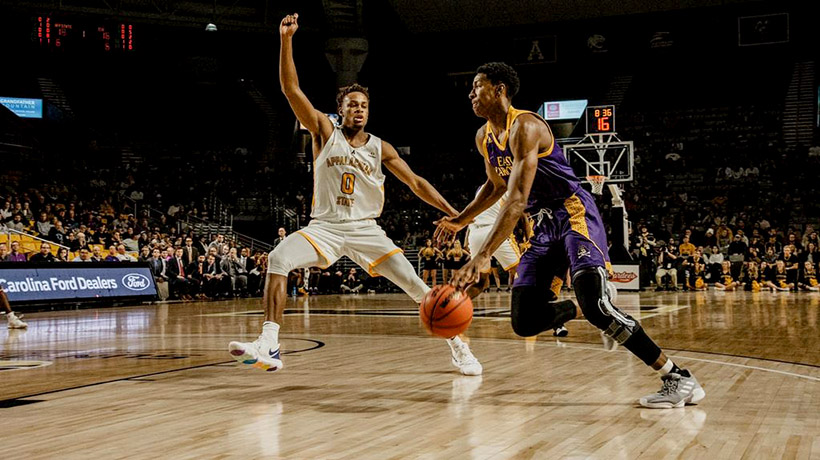 BOONE, N.C.     Justin Forrest and Adrian Delph combined for 41 points to lead Appalachian State to a 68-62 win over visiting East Carolina inside the Holmes Convocation Center Tuesday night, snapping the Pirates' three-game series winning streak and sending them to their second straight road loss this season.

Forrest scored a game-high 22 points on 5-of-12 shooting from the floor and 10-of-11 at the free throw line. Delph, who was averaging just 7.0 points per game for his career, dropped in a career-high 19 points after burying 4-of-6 3-point attempts before halftime.

The Mountaineers (2-1) rushed out to an 11-0 lead in the first four minutes as the Pirates (1-2) missed their first seven shots from the field. ECU finally broke the ice five minutes into the contest as freshman Charles Coleman scored underneath.

That started an 11-3 run in which Jayden Gardner and Brandon Suggs combined to sink seven consecutive free throws sandwiched between Coleman's basket and J.J. Miles jumper just inside the arc.

Back-to-back 3s from Seth LeDay and Miles brought the Pirates within two, 21-19, before Appalachian State scored five unanswered to go back up by seven.

Despite shooting just 31 percent and surrendering 10 points off turnovers, the Pirates were only down four at halftime, 31-27, and had built some momentum after outscoring Appalachian State by seven in the final 15 minutes of the half.

The second half opened with Suggs scoring the Pirates' first seven points and giving them their first lead of the game, 34-33, with a 3-pointer 1:53 into the stanza.

The two teams then traded the lead 10 times over the next 10 minutes before the game was knotted at 50-all with just over eight minutes remaining.

Following an ECU turnover Isaac Johnson put the Mountaineers ahead to stay, 52-50, with seven minutes to play.

Forrest's 3-pointer gave the Mountaineers a five-point cushion before LeDay pulled the Pirates within three, 61-58, with 45 seconds left.

Appalachian State made 10-of-14 free throws in the final 45 seconds to preserve the victory.

The Pirates will look to snap their two-game slide Saturday afternoon at home against 2019 ASUN champion Liberty. Tip-off is set for 4 p.m.