Here in North Carolina, in this century, per-capita carbon dioxide emissions from energy generation are down over 50 percent. We are witnessing falling emissions even as we are one of the nation's fastest-growth states. North Carolina, electricity, emissions, coal, nuclear energy
Home
Categories
Login

Here in North Carolina, in this century, per-capita carbon dioxide emissions from energy generation are down over 50 percent. We are witnessing falling emissions even as we are one of the nation's fastest-growth states.

A big reason is the onset of price-competitive natural gas displacing coal. In 2000, coal was the top source for electricity in North Carolina by far. Coal was producing nearly two-thirds (62.1 percent) of the state's electricity. Second place went to nuclear (32 percent) while natural gas was an afterthought at 0.9 percent. Now it's nuclear (33 percent) following by natural gas (30 percent). Coal is at 28.6 percent. 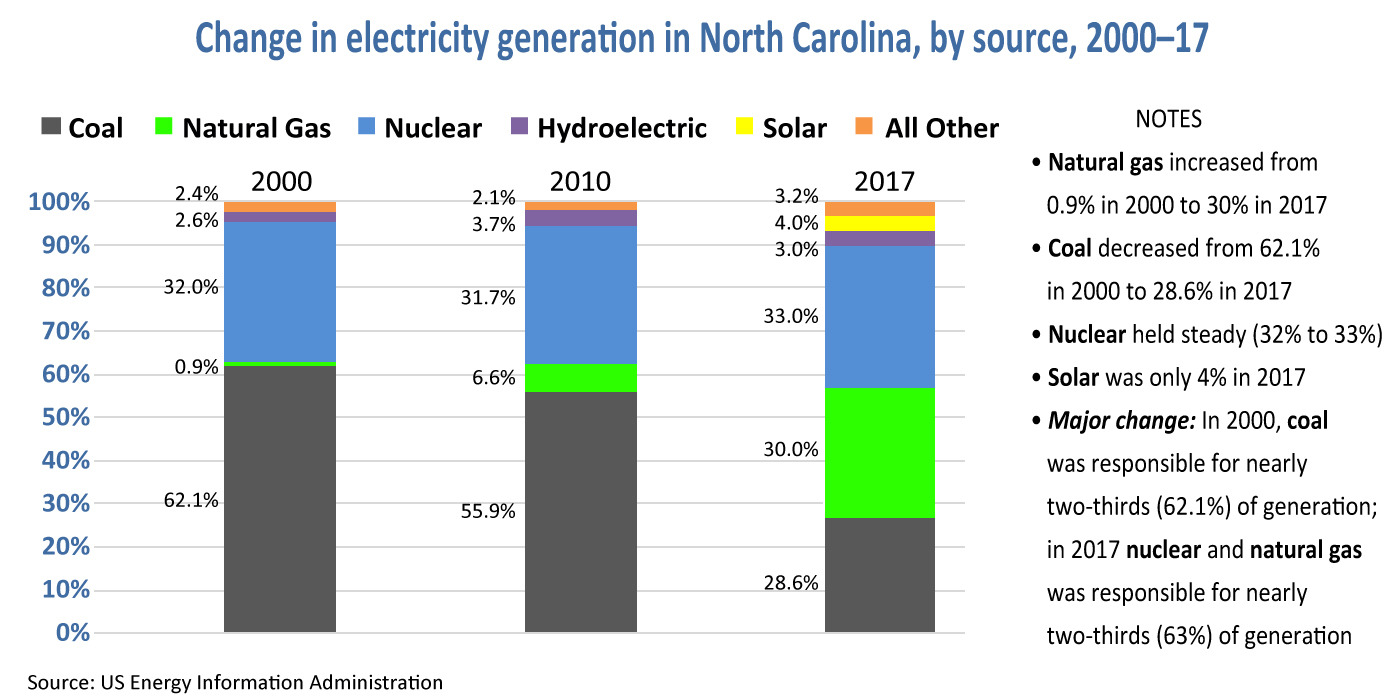 The unsung hero in this changeover to cleaner while still low-cost energy generation in North Carolina is nuclear energy. While coal and natural gas have seen tremendous changes, nuclear has been remarkably consistent (see the chart).

That's important because nuclear is not just a zero-emissions energy source. It's also incredibly efficient and can produce electricity on demand (it's reliable). These aspects put nuclear in a class apart from renewable energy sources that may be zero-emissions but also are frequently zero-energy, depending on the time of day, the weather, and what the winds may be doing at the moment. Solar and wind plants require costly, emissions-producing backup generation, which is why Brookings research has found nuclear to be "the most cost-effective zero-emission technology."

It's also important for another big reason. According to the Institute for Energy Research, the levelized cost of energy from existing nuclear power plants is nearly one-third the levelized cost of energy from new wind and solar plants plus their required backup generation. It's also two-thirds the cost of a new natural gas plant. So North Carolina's nuclear power fleet - Shearon Harris, Brunswick, and McGuire - are zero-emissions, incredibly efficient, reliable, and least-cost sources of electricity.

The price of electricity affects just about everybody and everything. It impacts the poor much more than anyone else. That's why the state's legal standard for electric utilities is least-cost, reliable electricity at the flip of the switch.

New research reinforces the importance of least-cost electricity and the role of nuclear in ensuring it. It won't just keep prices and emissions low. It'll save lives.

Exposure to cold is one reason that mortality peaks in winter, and a higher heating price increases exposure to cold by reducing heating use. It also raises energy bills, which could affect health by decreasing other health-promoting spending. Our empirical approach combines spatial variation in the energy source used for home heating and temporal variation in the national prices of natural gas versus electricity. We find that a lower heating price reduces winter mortality, driven mostly by cardiovascular and respiratory causes.

Think that research doesn't really relate to North Carolina? Then remember the relief felt by Eastern North Carolina electricity consumers when they received a long-needed rate cut. One retiree said his power bills were so high he had to choose between "Do I stay warm or eat?"

People having to spend more on electricity than they ought to means having to cut energy use as well as cut spending on other things. That includes spending on things that promote good health, as the authors point out. 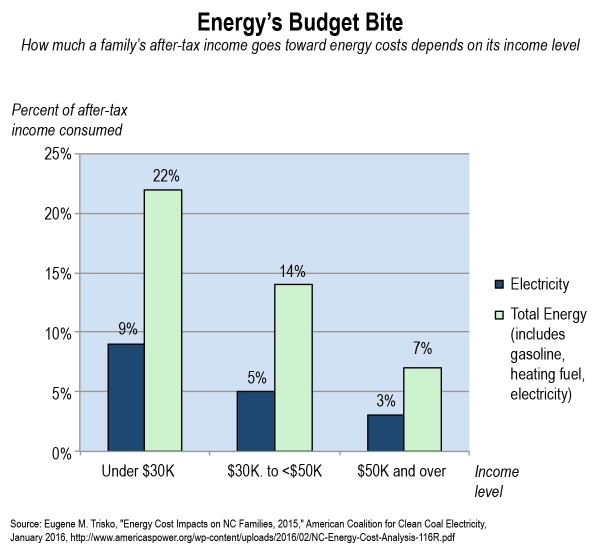 The paper by economists Matthew J. Neidell, Shinsuke Uchida, and Marcella Veronesi examined the effects of replacing all nuclear power in Japan with fossil fuels, in the aftermath of the Fukushima Daiichi nuclear accident.

Here is the abstract:

This paper provides a large scale, empirical evaluation of unintended effects from invoking the precautionary principle after the Fukushima Daiichi nuclear accident. After the accident, all nuclear power stations ceased operation and nuclear power was replaced by fossil fuels, causing an exogenous increase in electricity prices.

In other words, higher electricity prices from shutting down all nuclear power caused more deaths than the nuclear accident that prompted the decision.

Nuclear provided almost the same proportion of energy to Japan (30 percent) as it does to North Carolina, but Japan shut down all 54 of its reactors, even though only 15 were at risk from tsunamis. Now Japan is the second-largest net importer of fossil fuels in the world, and electricity prices increased by as much as 38 percent.

In the next few years, Duke Energy will begin seeking license renewals from the Nuclear Regulatory Commission to extend the lives of North Carolina's nuclear fleet. In the meantime, North Carolina's policymakers must be careful not to make foolish policy choices that would, whether intentionally or not, cause our power generation to shift to costlier sources. Such a move would not only make our power generation more polluting and less efficient and reliable, but also it would put lives at risk.