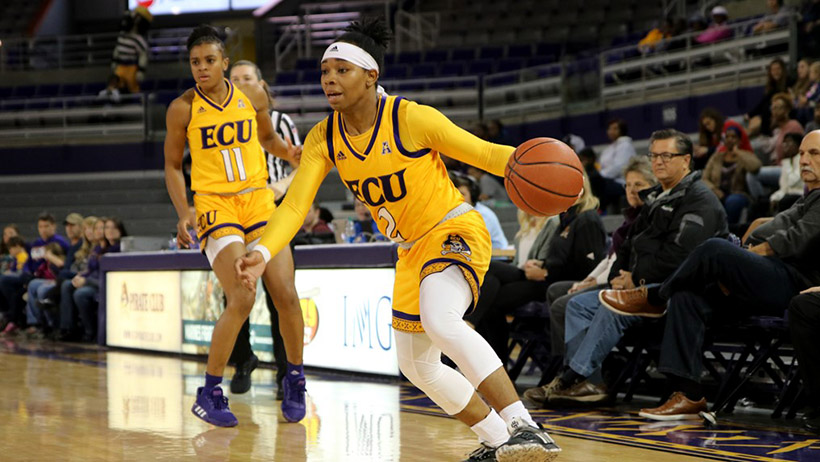 ECU (1-1) bounced back from a season-opening defeat to top USC Upstate 69-48, giving head coach Kim McNeill her first win in charge of the Pirates. Taniyah Thompson led ECU with 25 points, the most by an ECU freshman since Ariyana Williams scored 34 points against Savannah State in Dec. 2017. Thompson is averaging 18.0 points per game, putting her in a tie for seventh in the conference and first among freshmen. Thompson also grabbed seven boards and is second on the team with 6.5 rebounds per game.

Lashonda Monk is once again leading the conference in steals after grabbing 11 steals over the first two games. Monk now has 203 career steals, becoming just the sixth ECU player to reach 200 career thefts. Along with her work on the defensive end, Monk is averaging a team-high 18.5 points, sixth in the league. She followed a 20-point performance against Middle Tennessee with 17 points against USC Upstate, adding a career-high nine assists against the Spartans.

Rounding out the trio of Pirates scoring in double-figures who is averaging a double-double at 13.0 points and 11.0 rebounds per game. Johnson narrowly missed her second straight double-double of the season against USC Upstate, scoring 10 points to go with nine boards. As a team, ECU has excelled at forcing turnovers, with the Pirates ranking 15th in the country by forcing 28.5 opponent miscues per game. ECU's turnover margin is even better, ranking sixth in the NCAA at +17.0.

William & Mary (2-0) opened its season against Army and Maryland Eastern Shore. Eva Hodgson leads the Tribe in scoring, averaging 21.0 points while Sydney Wagner is averaging 13.0 points off the bench. On the boards, William & Mary rebounds as a team, with Hodgson's 5.0 rebounds per game leading the team and eight players averaging between two and five boards. The Tribe will be hoping for improvement from Preseason All-CAA Honorable Mention selection Victoria Reynolds, who is averaging just 9.0 points and shooting 8-of-21 (.381) from the floor. ECU will need to prevent a slow start, as the Tribe is outscoring opponents 43-15 in the first quarter this season.

The series against William & Mary is one of the longest running for ECU, with the two schools having met 47 times since the first matchup in 1979. The Pirates have a dominating 33-14 record against the Tribe, although William & Mary has won three straight against ECU. Last season, the Pirates traveled to Williamsburg, Va., and left with a 63-43 loss. Johnson finished with a double-double in the loss, scoring 10 points to go with 14 rebounds, but she was the only Pirate in double-figures as ECU shot just 17-of-68 (25.0%) from the field.

Tipoff is scheduled for 7 p.m., inside Minges Coliseum. Fans can stream the game HERE, follow the live stats HERE or listen to the radio broadcast HERE.