East Carolina will wrap up its two-game road trip Tuesday night when it takes on instate foe Appalachian State in Boone. The game is scheduled for a 7 p.m. tip-off and will be streamed on ESPN+. east carolina university, ECU, men's basketball, gameday, appalachian state, november 12, 2019
Home
Categories
Login 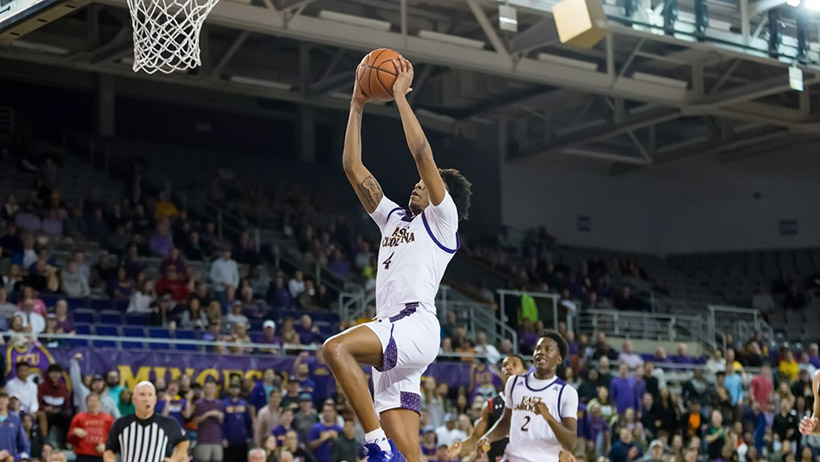 GREENVILLE, N.C.     East Carolina will wrap up its two-game road trip Tuesday night when it takes on instate foe Appalachian State in Boone. The game is scheduled for a 7 p.m. tip-off and will be streamed on ESPN+.

Both teams enter the game with identical 1-1 records. ECU is coming off a 62-57 loss at Navy in the Veterans Classic Friday night, while the Mountaineers posted an 83-56 win over Division III Ferrum on Thursday night.

The Pirates led Navy by eight early at the start of the second half, but were unable to land the knockout punch and put the Midshipmen away. Navy finished the game on a 19-10 run.

Jayden Gardner led the Pirates with 15 points and eight rebounds while Seth LeDay added 11 points and J.J. Miles had 10.

"We have to play better in longer spurts," ECU Head Coach Joe Dooley said. "We led the game for 28 minutes and I think we had a stretch where offensively we missed some open shots and that affected our defense. We put them on the free throw line a bunch of times. They doubled us on the free throw line, which we can't have happen. Too many middle drives, too many paint touches. We've got to guard the ball better on the perimeter."

A year ago it was LeDay who lifted the Pirates to victory over the Mountaineers scoring with 23 ticks remaining to break an 81-all tie and giving ECU an 83-81 victory. He finished with 18 points and nine rebounds. Gardner led the Pirates with 22 points, sinking 16-of-19 free throw attempts.

The win was the third straight in the series for the Pirates, who hold a 36-27 advantage all-time. Tuesday night's game will be ECU's first visit to Boone since 2001.

Justin Forrest led the Mountaineers with 24 points against ECU last season and is back for his junior campaign. He averaged over 16 points per game as a sophomore while shooting better than 36 percent outside the arc. Forrest had 27 points in the Mountaineers' season-opener against Michigan.

Senior forward Isaac Johnson has been ASU's top rebounder in each of the first two games, grabbing seven boards versus the Wolverines and nine versus Ferrum. He's averaged approximately 8.5 rebounds per game each of the past two seasons.

Following a 21-loss season in 2018-19, the Mountaineers made a change at head coach, tabbing Dustin Kearns to lead the program after two years as head coach at Presbyterian.

The Pirates also suffered 21 losses last season and brought in 11 newcomers to help steady the ship.

"We've got a long way to go," Dooley said. "I do think that the group is going to be a good group. We've just got to get some experience. Going on the road to begin is probably not great, but it is what it is. You take it and you learn. Hopefully as these guys are getting minutes right now that'll help us later in the year.

"I think there's more familiarity [after playing a game on the road], you also have a little bit more of a routine. We went to Wake and scrimmaged over there, but that's not in front of fans. There's some stop action, you have media timeouts, a real halftime and all those things are a little bit different. There will now be a little bit more of a comfort level because they've done it before."