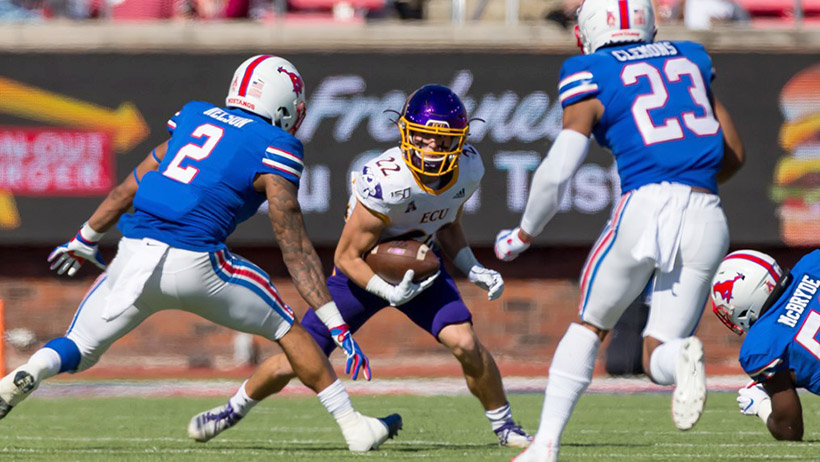 Additionally, sophomore quarterback Holton Ahlers was selected to the AAC's weekly honor roll for his performance against No. 23 SMU Saturday.

Snead picked up his first career league player-of-the-week accolade after catching 19 passes for 240 yards with three touchdowns (all career-bests) in a 59-51 loss to the Mustangs. His 19 receptions currently stands as the top single-game catch total in FBS this season and was three shy of a school single-game record, which is currently owned by Zay Jones (22 vs. South Carolina in 2016).

The Raleigh, N.C. native, whose 240 yards ranks third all-time at ECU, became the eighth Pirate to eclipse 200 reception yards in a game and second in back-to-back weeks (C.J. Johnson 283 vs. Cincinnati). He currently leads the team with five TD catches while standing second to Johnson in receptions (43) and receiving yards (578).

Ahlers, who earned honor roll status for the first time, completed 32-of-42 passes for 498 yards with six touchdowns. The Greenville, N.C. native set an ECU single-game record with his six TD throws, surpassing the previous mark of five set on nine previous occasions and last by Philip Nelson against Western Carolina in 2016. Against the Mustangs, he accounted for 523 yards of total offense, which included 25 rushing, connected with seven different receivers on a pass with 14 of his 32 completions going for 10 or more yards (nine for 20-plus).