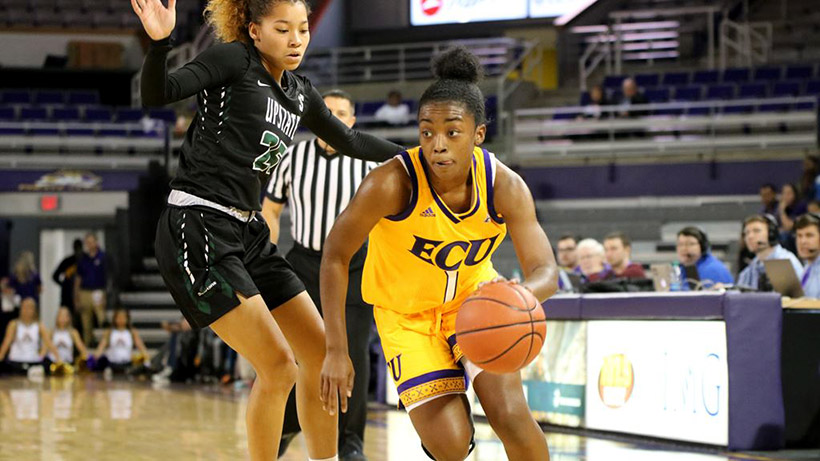 Taniyah Thompson led all scorers by pouring in 25 points in just her second career game, shooting 10-of-21 from the field and adding seven rebounds. Her 25 points are the most by an ECU freshman since Ariyana Williams scored 34 against Savannah State in 2017-18.

Along with Thompson, Lashonda Monk added 17 points of her own to go along with nine assists and five steals. Monk now has 11 steals through two games and also became just the sixth player in program history to reach 200 career steals. Rounding out the Pirates in double figures was Raven Johnson, who finished with 10 points and nine rebounds to narrowly miss her second straight double-double.

For the Spartans, Kathryn Kirkwood had a team-high 13 points on 6-of-12 shooting. USC Upstate struggled to hold on to the ball, turning it over 30 times which led to 25 ECU points.

It took some time for both teams to get going, as neither scored for more than three minutes to start the game. The Pirates finally got the lids of the rims and jumped out to a 6-0 lead and a 13-8 lead after the first quarter.

In the beginning of the second quarter, USC Upstate got into a groove and had the game tied at 17-17 with 7:18 remaining in the half. However from there, ECU put the clamps on the Spartan offense. The Pirates did not allow another point for the remainder of the quarter, while going on a 10-0 run, six of which came from Thompson. That gave ECU a 27-17 lead heading into halftime.

A 7-0 run in the middle of the third quarter helped put the game away for ECU. With ECU leading 41-30, Monk buried a triple from the top of the arc. After a Ryann Evans steal, Dominique Claytor was able to put in a layup. After a Spartan timeout, Monk grabbed another steal and was fouled on the ensuing shot, with the junior guard making both free throws to extend the lead to 48-30.

USC Upstate never got closer than 15 points the rest of the way, with ECU rattling off another 10-0 run in the fourth quarter to finish with a 21 point win.

Head Coach Kim McNeill     On her team's gameplan:     "Well we knew we wanted to start the game off and set the tone defensively with our press, and we really wanted to bottle her [Brianna Lewis] up, and not let her get loose, and kind of force her to the sideline and keep her in traps. I thought we did that. I think we turned her over about seven or eight times. Kind of took her out of the game. When you have to face that type of pressure for 40 minutes it wears on you. That's what I think the reason why we play is so unique and so special because we can just continue to wear you down you know just start to get frustrated, and I think she started to get frustrated a little bit there."

On the message to the team at halftime:     "We just challenged them. When we came in at halftime there wasn't a lot to say. X's and O's I didn't think that we necessarily started the game off with great energy and great effort so we just came in at halftime and really challenged them. Their effort and us getting after them on defense. We knew coming in that we were probably going to see 40 minutes of a 2 -3 zone, some form of a zone so we've been working on that. We stressed the best way to go against that and get stops, and steals and get out in transition, and get easy baskets so I thought we really accepted the challenge, got them out a little bit earlier to get up some shots and get their bodies warm and loose. They accepted it and we conquered the third quarter slump that we've been having."

Freshman guard Taniyah Thompson     On leading ECU in scoring:     "Well I appreciate my teammates for having faith in me throughout the whole game, passing me the ball. I wouldn't be able to score without them."

Junior guard Lashonda Monk     On the team's defense:     "I think her [McNeil] implementing that defense just kind of gets me going. Our press and our 12 defense just sets us up for getting a lot of steals, me and my teammates, so I think that really gets me going."

On her mindset going into the game:     "Defense. Last game we played a really good defense you know we tried to fight hard but in practice we've really been harping on like holding the middle, attacking the guard, penetrating, you know just really focusing on the little details in our defense."