ECU Comes up Short at No. 23 SMU | Beaufort County Now 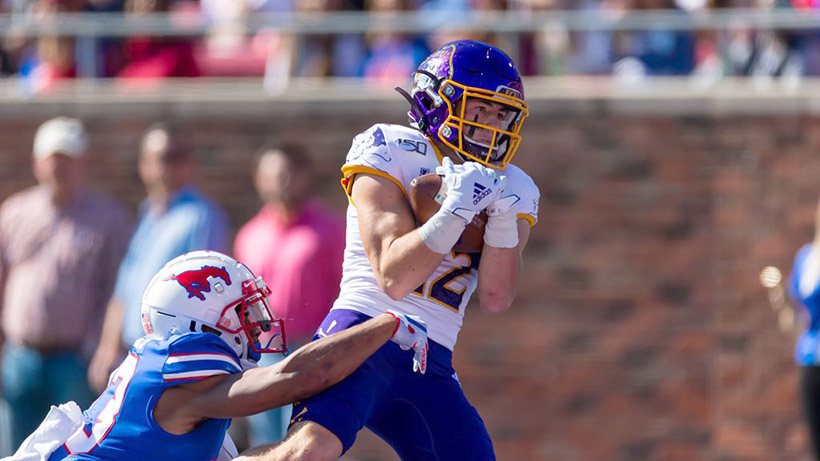 In a dizzying display on a beautiful, sunny fall afternoon at Gerald J. Ford Stadium, the Pirates and No. 23 SMU traded blows for nearly four hours before the Mustangs survived 59-51. The final offensive totals that featured numerous standout individual efforts are nothing shy of staggering: 1,260 yards of total offense (644 for ECU, 636 for SMU), 912 passing yards, 60 first downs (33 for SMU) and 10 scoring plays of at least 22 yards, including six of 45 yards or more.

But following the theme of a week ago when ECU (3-7, 0-6 AAC) came up short of an upset of No. 17 Cincinnati, one big mistake in the fourth quarter loomed large in ending a losing streak that has now reached five games this year and 10 consecutive road games in AAC play. An interception return for a touchdown turned the tide against the Bearcats; a muffed catch on a kickoff delivered the knockout on Saturday.

Hanging around much of the day but never leading after climbing out of a 28-10 hole, ECU trailed 52-44 with 7:25 to play when Tyler Snead collided with Jsi Hatfield as he prepared to receive the kick, and SMU pounced on the loose ball at the 22. A touchdown three minutes later essentially sealed the win, although the Mustangs still had to recover an onside kick before running out the clock.

"A lot of heart, a lot of guts, but too many mistakes made," a frustrated first-year ECU head coach Mike Houston said in his brief post-game comments. "It's hard to win in this league. We've got to correct the mistakes that are correctable. The self-enforced errors, those are the ones that are killing us."

Before the muffed kickoff, the 5-7, 165-pound redshirt freshman Snead stood tall among an ECU receiving corps missing its most prolific weapon during the last month. Freshman C.J. Johnson, who set AAC and single-game school records with 283 receiving yards last week against Cincinnati and had eclipsed 100 yards in three of the last four games, exited with an injury in the first quarter and did not return.

Snead stepped up to challenge that effort, finishing career bests of 19 catches for 240 yards and matched a career high with three touchdowns. UCLA transfer Audie Omotosho, who had not had a catch since the opener at NC State, filled Johnson's spot in the lineup and collected four receptions for 77 yards and a score.

Snead's 19 catches are two more than any other FBS receiver this season and fell just three shy of the school record of 22 set by Zay Jones against South Carolina in 2016.

Sophomore quarterback Holton Ahlers turned in another splendid performance on the heels of his record-setting output (535 passing yards) against Cincinnati. The left-hander completed 32 of 42 passes for 498 yards with no interceptions and a school-record six touchdowns (22, 36, 41. 45, 57 and 68 yards).

Proche emerged as Buchele's primary target, snaring 14 receptions for 167 yards and two touchdowns. Granson also proved tough for the Pirates to handle and finished seven catches for 138 yards and three touchdowns. Five of their catches converted fourth downs - SMU was just 5 of 14 on third down but 5 of 5 on fourth down.

The Mustangs also piled up 222 yards rushing, led by Xavier Jones with 157 yards on 20 carries.

For Houston, it's not a matter of effort but execution.

SMU wasted little time in jumping on top 7-0 after receiving the opening kickoff - the first time this season the Pirates have not started with the opening possession. The Mustangs needed just 2:16 to cover 75 yards, scoring on Buechele's 22-yard strike to Granson.

Freshman Ja'Quan McMillian's third interception of the year at the ECU 10 thwarted SMU's bid to quickly build a two-touchdown lead, then the Pirates' defense forced a punt after Gerard Springer's apparent fumble recovery was overturned by replay.

ECU's offense, which netted just 1 yard on its first eight plays, not only picked up its initial first down but suddenly pulled even at 7-7 when Ahlers teamed up with Hatfield on a 68-yard scoring pass.

Buechele promptly directed a nine-play, 75-yard drive to put the Mustangs back in front 14-7, completing 5 of 6 passes on the drive, capped by a 4-yard toss to Granson on fourth down. Ke'Mon Freeman provided the big play on the ground with a 21-yard run.

Jake Verity's first of three first-half field goals from 38 yards out got the Pirates within 14-10, but SMU responded with a touchdown for a 21-10 lead. Facing fourth-and-6 at the ECU 23 and with little confidence in their kicking game, the Mustangs gambled and picked up 20 yards on a Buechele pass to Rashee Rice. Jones crashed in on the next play.

The margin mushroomed to 28-10 on SMU's next possession, a quick-strike, three-drive covering 66 yards, punctuated by a 51-yard scoring pass from Buchele to James Proche.

The Pirates closed the half strong, scoring on their final two possessions to head to close the gap to 28-20. Snead came up with his first touchdown grab of the day, slipping behind the SMU secondary while Ahlers scrambled right, then left before unleashing a 36-yard strike.

ECU's defense came up with a rare stand for either team, and the Pirates used every second of the final minute to chalk up three points on Verity's 37-yard field goal.

A frantic third quarter featuring 17 points by each team, 16 total first downs and a combined 407 total yards (206 by ECU) ended with SMU owning a 45-37 lead. The first two touchdowns came in a span of less than three minutes

ECU carried its momentum over from the first half and scored in a three-play flash to draw within 28-27. Tight end Zech Byrd came up with a juggling, 46-yard catch for the score one play after a 33-yard run by freshman Demetrius Mauney.

SMU had an answer, converting a third-and-10 on a Buechele pass to Granson and scoring on a 35-yard run down the right sideline by Jones for a 35-27 lead.

The Holton-to-Snead connection struck again on the Pirates' next possession, a 47-yarder to trim SMU's lead to 35-34 with 8:06 left in the quarter.

The touchdown onslaught briefly stopped on the Mustangs' following drive, although they reached the ECU one yard line. After a false start on third down and an incomplete pass, SMU turned to Kevin Robledo for a 23-yard field goal and 38-34 lead.

ECU cashed in a break on its next possession, getting Verity's fourth field goal four plays after a dropped interception by Rodney Clemons in the end zone

SMU needed just 1:29 to push the lead back to eight points with Jones providing the exclamation when he got loose and won footrace for a 64-yard score and 45-37 lead with 19 seconds left in the third quarter

ECU overcame a Snead muff of a fair catch at the 3 on the ensuing kickoff and drove 97 yards to get within 45-44. The Pirates took their own fourth-down gambled from their 29, and Ahlers stretched on a keeper to pick up just enough for the first down - which was confirmed by replay.

SMU took over after the fumbled kickoff and scored on Buechele's two-yard play-action pass to Proche for a 59-44 lead with 4:18 to play

Ahlers hit Omotosho with a 22-yard TD pass with 1:56 to play, leaving the Pirates in a 59-51 hole. Granson covered onside kick at the ECU 47, and the Mustangs sealed the win when Buechele flipped a four-yard pass to Proche to convert one last fourth down.