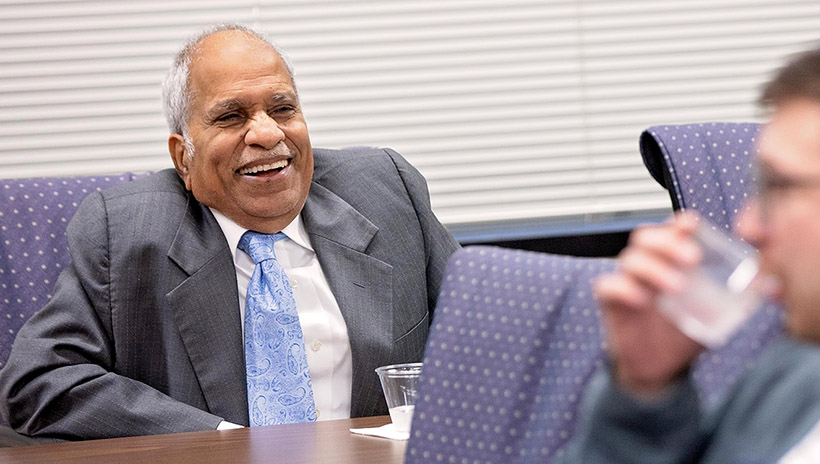 Dr. R.K.M. Jayanty, Voyages of Discovery presenter, met with students and friends of Harriot College prior to his evening lecture on Nov. 7. | Photo: Cliff Hollis

Preserving and improving the quality of breathable air is the life work of Dr. R.K.M. Jayanty, adjunct professor of biological and agricultural engineering at N.C. State, who spoke at East Carolina University on Nov. 7. Jayanty visited campus as the second guest in the 2019-2020 Thomas Harriot College of Arts and Sciences Voyages of Discovery Series.

"I am very thrilled to be introducing world-renowned chemist Dr. R.K.M. Jayanty to you this evening," said Andrew Morehead, professor and chair of the Department of Chemistry. "Dr. Jayanty's life story, the obstacles he has overcome and the tremendous service he has provided society are all part of a compelling story of a person behind some seemingly arcane but critically important science."

Jayanty was born in a small village in India in 1946, and due to health issues, did not begin attending school until the age of 8. However, he persevered and completed high school and college degrees in India and England. 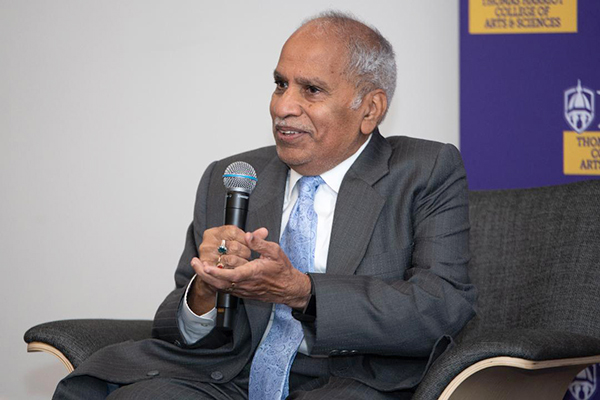 Jayanty visited with friends of the College of Arts and Sciences and the College of Health and Human Performance at a special reception prior to his evening event. | Photo: Rob Taylor Photography & Design
He arrived in the United States in 1973 with $3 in his pocket to complete his post-doctoral education at Pennsylvania State University. In 1978, he accepted a job as an entry-level chemist with RTI International in Raleigh, rising through the ranks to distinguished fellow.

Jayanty spent the next 38 years, before his retirement from RTI, working to solve the problems of air pollution. His work, mainly funded by the Environmental Protection Agency, has focused on fine particulate matters and volatile organic compounds in the atmosphere.

He assisted in the development of methods that are used worldwide to determine compliance and enforcement strategies to reduce air pollutants, and his service on the N.C. Science Advisory Board has led to the regulation, control and reduction of 21 toxic air pollutants and fine particulates in this state. In 2017, Jayanty was honored for these efforts with the North Carolina Award for science presented by Gov. Roy Cooper.

During his presentation, Jayanty talked about air pollution before the Clean Air Act, the harmful health effects of pollutants in our atmosphere - sulfur dioxide, nitrogen dioxide, sulfuric acid, nitric acid and others - delaying the reaction of chemicals within the stratosphere and slowing the process of the reduction in the ozone layer, which protects human life from harmful UV rays. 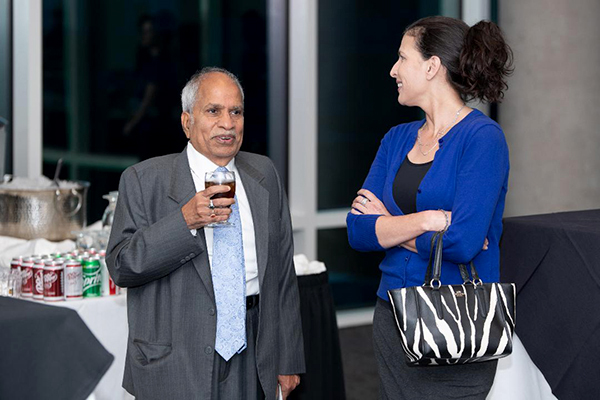 Jayanty visited with friends of the College of Arts and Sciences and the College of Health and Human Performance at a special reception prior to his evening event. | Photo: Rob Taylor Photography & Design
According to Jayanty, the breakdown of the ozone layer and breathing certain chemical particulates may lead to a number of health issues, including asthma, bronchitis, cancer, and potentially diabetes and Alzheimer's, which are now being investigated.

"In general, the air quality has improved considerably from the 1950s and '60s to today," Jayanty said.

For the future, he said, "The real challenge will be in reducing and eliminating sources of air pollution."

"I feel it is my responsibility to share the knowledge I've gained during my life, perhaps a small return on investment for those who stepped up at key moments to mentor and shepherd me along my worldwide discovery. In spite of many setbacks in my childhood, I was still able to contribute, to some extent, to improve air quality throughout the world," he said.

Earlier in the day, Jayanty met with a small group of ECU undergraduate and graduate chemistry students who learned about Jayanty's journey and had the opportunity to ask his thoughts on alternative energy sources.

Even with the advent of wind and solar power, Jayanty said annual carbon dioxide emissions, which deplete the ozone layer, increase the Earth's temperature and expose humans to harmful UV rays, have risen over the past 40 years. He said additional research is needed to continue to make energy resources that are more efficient and emit fewer pollutants.

Jayanty encouraged students to seek a mentor, and he told them that to be successful they must set goals, work hard and be persistent, a message he reiterated during his evening lecture.

"It was an honor meeting Dr. R.K.M. Jayanty and hearing about his experiences and expertise," said Melany Contreras, a chemistry and physics major who attended the student session. "Learning about some of the challenges he encountered throughout his professional journey and how he overcame them was encouraging and made me feel even more capable of achieving my own career goals."