A lot of attention in the aftermath of elections on November 5 focused on nationalizing voting trends in Virginia and Kentucky. civitas, mecklenburg, sales tax, hike attempt, november 8, 2019
Home
Categories
Login

Login to Send a Private Message to Civitas
Publisher's note: This post, by Ray Nothstine, was originally published in Civitas's online edition.

A lot of attention in the aftermath of elections on November 5 focused on nationalizing voting trends in Virginia and Kentucky. Mostly for what it means for the president and the two major political parties going forward. But over in Mecklenburg County, there was an important ballot referendum on increasing the current 7.25 percent sales tax to 7.5 percent. Defeated for the second time in five years, the measure lost out, only garnering 42.5 percent of the vote.

The extra nickel in tax for $20 spent was mostly going to be allocated for the Arts and Science Council and parks and greenways. I'm sure there was lip service to delivering arts to the poor or disadvantaged but it kind of reeks of a wealth transfer from the poor or working class to the upper class. In most instances, the wealthier are more apt to take advantage of or attend the performing arts. As most are aware, a sales tax is regressive, meaning it takes a much bigger bite from lower-income earners than high-income earners. 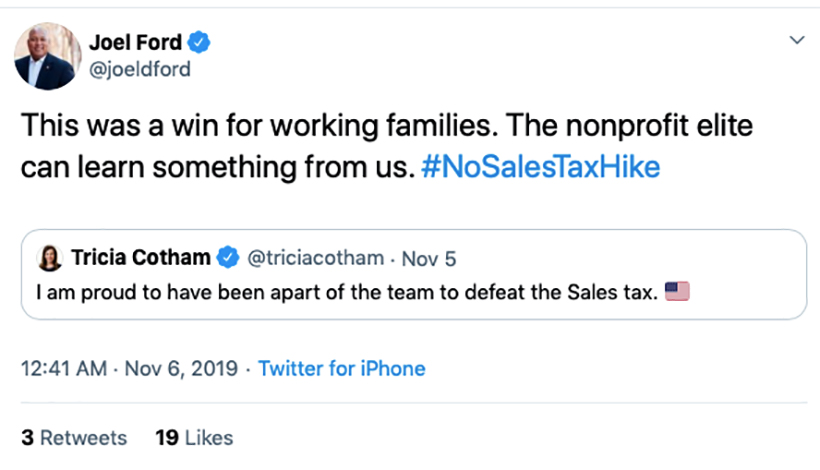 It was a good thing in Mecklenburg to see the voters defeat the sales tax hike. Seven and a quarter is a pretty high sales tax. The total sales tax cap for the state is at 7.5 percent, so this is that last little bit advocates wanted to squeeze out of the people. Those that would have been impacted the most are the ones who can least afford it. They have to toil all the more for every bit of additional sales tax that is levied.

Thomas Jefferson always stressed, that ultimately, liberty rests with the people. It's always good to see the people and voters make the right decision, particularly when it favors protecting the little guy.