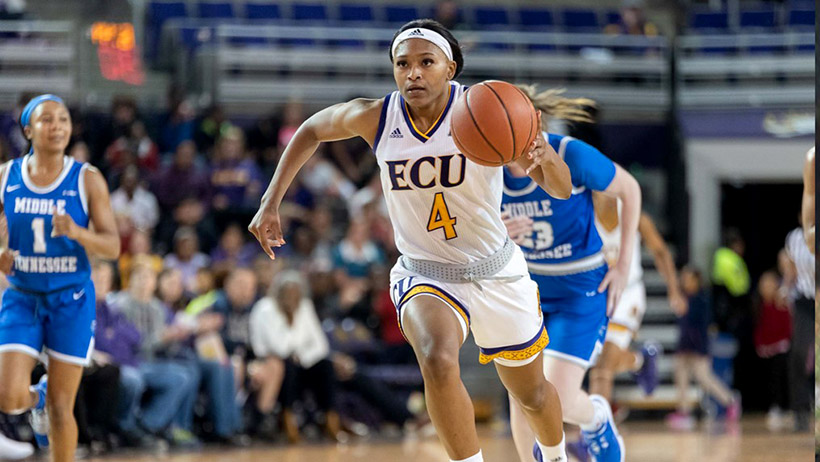 GREENVILLE, N.C.     After a tight loss in the season opener, the ECU women's basketball team will go for its first win as the Pirates host USC Upstate on Friday night in Minges Coliseum.

ECU (0-1) opened its season with a 68-66 loss to Middle Tennessee State. In front of a program-record 6,509 fans, many of them students from Pitt County Schools, the Pirates nearly erased a 14-point deficit in the final three minutes, with Lashonda Monk narrowly missing a potential game-winning three at the buzzer. Monk led ECU with 20 points, the seventh time in her career that she has broken the 20-point barrier. Along with her 20 points, Monk grabbed six steals, giving her 197 for her career. The junior is now sixth all-time in steals for ECU and will become just the sixth Pirate to reach 200 career steals.

Along with Monk, Raven Johnson started her season strong, scoring 16 points and hauling in 13 rebounds for her fourth career double-double. Johnson, along with Monk, was one of five Pirates with multiple steals as ECU forced 27 Middle Tennessee turnovers and scored 27 points off those Blue Raider miscues.

Rounding out the double-figure scorers for ECU was Necole Hope and Taniyah Thompson, who both scored 11 points. Hope hit the only triple of the day for ECU, giving the Pirates 47 straight games with at least one made three-pointer. Thompson's 11 points were the most by an ECU freshman in her debut since J'Kyra Brown scored 20 points against Virginia Intermont in the 2013-14 season opener.

USC Upstate (1-0) started its season with a 74-61 win over Florida A&M. Brianna Lewis led the way for the Spartans, playing all 40 minutes, scoring 19 points and dishing out 12 assists. Lewis was the team's leading scorer a year ago, ranking fourth in the Big South Conference with 15.7 points per game and second in the league in assists with 4.7 per game. The Spartans had an advantage in the paint against Florida A&M, scoring 34 points in the paint to just 16 for Florida A&M. Quadijah Moore finished with a double-double, scoring 13 points and grabbing 11 boards while Jada Logan (11 points) and Riley Popplewell (10 points) also reached double-figures.

It will be the third consecutive season the two schools have met in Minges Coliseum, with ECU holding a 2-0 lead in the series. Last year, ECU beat the Spartans 63-53 behind 18 points from recent graduate Salita Greene. That contest was tied heading into the fourth quarter before ECU outscored USC Upstate 25-15 in the final frame. In 2017, the two teams met in the season-opener and Johnson powered ECU to a 66-53 victory, scoring a then-career high 21 points.

Tipoff for Friday's game is scheduled for 7 p.m., and tickets are available HERE. Fans can also stream the game HERE or follow the live stats HERE.