Gameday: ECU Travels to No. 23 SMU 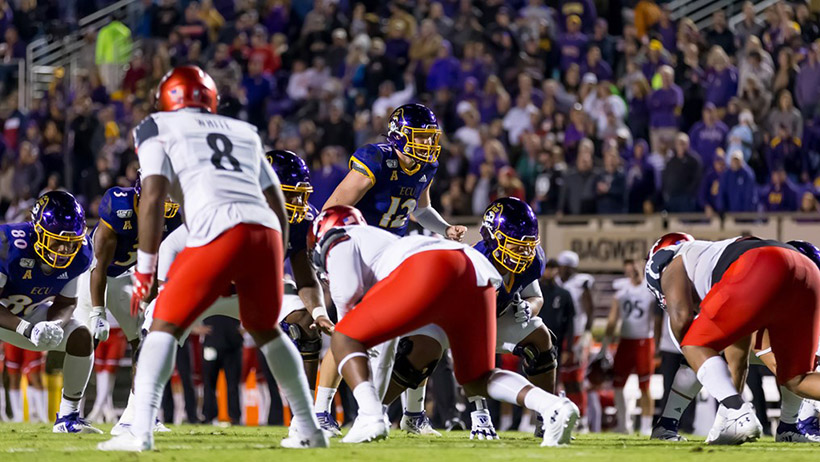 GREENVILLE, N.C.     East Carolina will open a two-game road swing with its longest trip of the season, traveling to Dallas to face American Athletic Conference West Division contender No. 23 SMU Saturday. In addition, the tilt against the Mustangs also closes a two-game stretch against nationally-ranked opponents for the Pirates, who dropped a 46-43 decision to AAC East Division forerunner No. 17 Cincinnati last week. ECU will attempt to post multiple road wins in the same season for the first time since 2015, which also marks the year of the Pirates' last meeting against SMU on the Hilltop.

ECU RECORDS AND STREAKS
THE SERIES     East Carolina leads 4-3 ... The Pirates and Mustangs both turned in respective sweeps as Conference USA inter-divisional opponents - ECU taking 2005 and 2006 matchups before SMU posted consecutive victories in 2009 and 2010 ... The Pirates bounced back by capturing two of the first three American Athletic Conference meetings, posting wins in 2014 and 2015 under Ruffin McNeill before suffering a setback in 2016 ... The Mustangs' visit to Greenville in 2014 also marked East Carolina's inaugural AAC clash.

MIKE HOUSTON AGAINST THE MUSTANGS     Including Mike Houston's prior eight-year tenure as a collegiate head coach at Lenoir-Rhyne, The Citadel and James Madison, Saturday's game will mark his first-ever meeting against SMU.

SONNY DYKES AGAINST THE PIRATES     While Saturday's contest will be Sonny Dykes' first against East Carolina as a head coach, he did face the Pirates once as an assistant ... During his first year as Texas Tech's co-offensive coordinator and wide receivers coach in 2000, ECU raced out to a 34-0 second-quarter lead before posting a 40-27 victory in the galleryfurniture.com Bowl at the Astrodome ... Leonard Henry (20-92, 2 TDs) led a 252-yard rushing attack, Keith Stokes had a 71-yard punt return for a touchdown and David Garrard completed 17-of-27 passes for 229 yards and another score to lead the Pirates offensively ... Quarterback Kliff Kingsbury threw for 307 yards on a 31-of-49 passing effort to headline the Red Raiders' attack ... Nine of Dykes' receivers caught passes, including three by Wes Welker.

HOUSTON RETURNS TO THE METROPLEX     ECU Head Coach Mike Houston will make a return to the DFW area this weekend for the first time since appearing in back-to-back NCAA FCS National Championship Games to close out the 2016 and 2017 campaigns.