What Can We Learn About Gov. Cooper From His Leadership Style? | Beaufort County Now

You can tell a lot about a person by how they treat others, including those whom they hold political or professional power over. civitas, govenor, roy cooper, leadership style, november 7, 2019
Home
Categories
Login

What Can We Learn About Gov. Cooper From His Leadership Style?

Login to Send a Private Message to Civitas
Publisher's note: This post, by Brooke Medina, was originally published in Civitas's online edition.

You can tell a lot about a person by how they treat others, including those whom they hold political or professional power over. And when considering character, namely a politician's, it should be noted that their willingness-or unwillingness-to be transparent with the public is also an indicator of where they fall on the integrity spectrum.

Gov. Roy Cooper's leadership since he took office over three years ago has provided us with several lessons, most of which center around how to avoid taking public stances on issues he doesn't find politically advantageous. The following should serve as a real-life cautionary tale to other would-be elected officials on how not to behave toward colleagues, journalists, and citizens:

There come times when even an evading politician must look someone they don't like in the eye and dignify them with a response. That opportunity came for Gov. Cooper just this past week when State Treasurer Dale Folwell called to task governor-appointed Department of Transportation head James Trogdon for recklessly overspending tens of millions in taxpayer dollars.

Instead of acknowledging the legitimate concerns laid out by the treasurer, Cooper's office issued a childish ad hominem:


Not only was this sophomoric response beneath the governor's office, but it was also a disservice to taxpayers who have entrusted our state's chief executive with the responsibility of stewarding our tax dollars well. 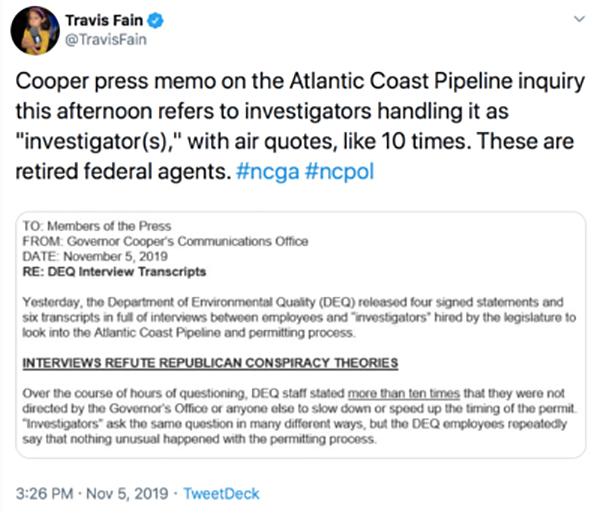 This brings us to our next lesson in poor leadership: being dismissive of accountability. Many that have achieved notoriety have a difficult time submitting to oversight. It's easy to fall into this trap when one is surrounded by people that regularly agree with them. And let's not kid ourselves, no politician relishes being investigated (just ask President Trump). Yet, public officials are required to conduct their public service in a way that is...well, subject to public scrutiny.

So, when the governor was called upon to give an account of his questionable behavior surrounding what appeared to be a quid pro quo agreement between his office and Atlantic Coast Pipeline, LLC, he would have been wise to exhibit a willingness to work with investigators to immediately dispel any doubt that his behavior was above reproach. Instead, his office was dismissive of these investigators, who happen to be retired federal agents.

Previously, the governor also instructed employees to stonewall investigators as they looked into his actions surrounding the pipeline agreement.

A legislative oversight committee hearing is scheduled for Friday, November 8. The governor has been asked to appear.


Disregard for the truth

Sadly, the governor and his administration have used their trusted position to spin narratives and tell tall tales. Whether it be issuing misleading statements on Medicaid expansion from the North Carolina Division of Military Veteran's Affairs to his blatant hypocrisy when it comes to unfair corporate tax cuts, Cooper's record in truthful leadership has been less than exemplary.

But perhaps the most salient and stomach turning example of Cooper's disregard for the truth was evidenced in his veto of the Born Alive Infant Survivor's Protection Act earlier this year. Good leaders protect the vulnerable. Leadership rooted in integrity does not sacrifice the existence of the innocent for the sake of political power. The governor's claim that existing laws were sufficient to protect survivors of "botched" abortions is inconsistent with a proper reading of both North Carolina Lily's Law and the federal Born-Alive Infant Protection Act of 2002.

Gov. Cooper is nearing his fourth year as chief executive of this great state. He has provided the public with numerous examples of his leadership style, including ones not listed above, such as poor oversight of hurricane relief funding, evasiveness toward journalists surrounding his travel, and the persistent chaos surrounding his board of elections appointees.

Although he is largely silent on topics that might draw too much attention to politically unpopular positions, his actions will continue to speak louder than his words.