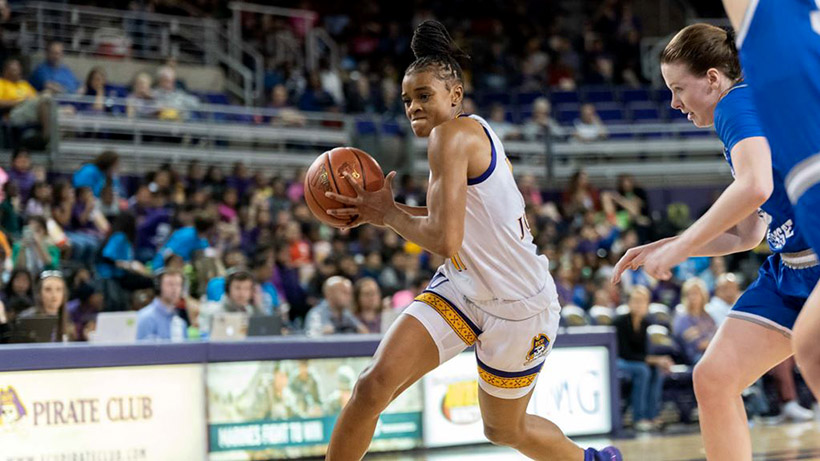 GREENVILLE, N.C.     In front of a record crowd, the ECU women's basketball team mounted a frantic comeback, but came up short against Middle Tennessee 68-66 on Wednesday afternoon inside Minges Coliseum.

Lashonda Monk led the Pirates with 20 points and six steals. Raven Johnson recorded her first double-double of the season, scoring 16 points and hauling in 13 rebounds. Taniyah Thompson and Necole Hope were also in double-figures for ECU, scoring 11 points apiece.

For the Blue Raiders, Charity Savage shot an efficient 4-of-5 from the field and 8-of-10 from the free throw line to finish with 16 points and 13 boards. Courtney Wilson (15 points) and Taylor Sutton (12 points) combined for seven of Middle Tennessee's nine three-pointers while Anastasia Hayes was also in double-figures with 13 points.

After a tightly contested first quarter that saw the Blue Raiders hold an 18-14 lead, the potential of the Pirate defense showed in the second frame. The Pirates held Middle Tennessee to just four points in the second quarter, forcing seven turnovers and holding the Blue Raiders to 2-of-15 (13.3%) shooting. Monk was a big part of that, grabbing three steals and scoring six points in the quarter to help ECU hold a 30-22 lead at the break.

The script flipped near the end of the third quarter. After Middle Tennessee whittled the ECU lead down, a Thompson free throw gave the Pirates a 39-38 lead. However, the Blue Raiders rattled off a three-minute 10-0 run to take a 48-39 advantage with 47 seconds left in the third. Overall, Middle Tennessee outscored ECU 26-13 in the third.

The Pirates trailed all of the fourth quarter, with the deficit extending to 14 with 3:32 remaining. However, the ECU defense helped the team slowly climb back into the game. For the final 3:32, ECU did not allow Middle Tennessee to make another field goal and held the Blue Raiders to just three points.

On the other end, ECU slowly, but surely cut into the deficit. A layup by Thompson with 2:02 to go made it 67-58. From there, Monk scored eight straight points, the last two coming with 13 seconds remaining, to get ECU within two points. After a Middle Tennessee timeout, the ECU pressure forced a five-second call on the ensuing inbound, giving the Pirates the ball and a chance to tie with 10 seconds remaining. Rather than play for overtime, Monk went for the win with a three-pointer from the top of the key, but her attempt bounced off the rim as time expired.

ECU will turnaround quickly when the Pirates host USC Upstate on Friday night. Tipoff for that contest is scheduled for 7 p.m., inside Minges Coliseum.

Postgame Notes
Postgame Quotes     East Carolina head coach Kim McNeill     On the differences in the second and third quarters:     "I thought we went on a stretch where we had some lapses in our defense where we let them get up some easy shots. In the second quarter, we held them to four points. They started the game off hot, hitting some threes. We made some adjustments and limited their penetration, which took away their threes. Then in the third quarter, I thought we allowed the penetration again which gave them some completely wide-open threes. When you're completely wide-open like that, more times than not, you're going to hit it. On the other end, there was a stretch where I thought we got fatigued and we started taking fatigued shots when we should have brought it out and executed our offense a little bit. We missed some layups, which normally missed layups lead to made layups on the other end."

On how encouraging the final rally was:     "It's extremely encouraging. We talk about the buy-in with the new system and the new coaching staff. We're getting there, but we're not there yet. I tell them everyday that the way we look today is not the way we'll look in January or February. If they can keep bringing this energy and keep bringing this effort, we will get better."