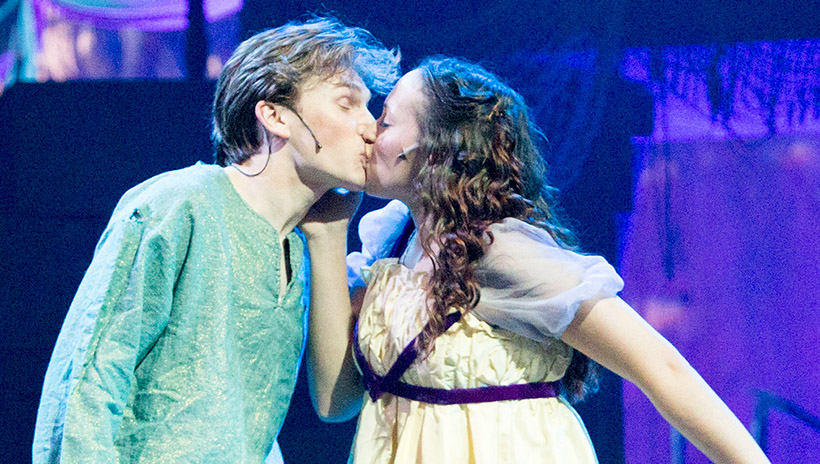 East Carolina University is at the forefront of training theater and dance students in the latest industry standards led by a growing part of production teams: intimacy directors and coordinators.

They serve as a bridge between actors and directors by advocating for and communicating what actors are comfortable doing - or not doing - in a role. It's especially important in a competitive field where actors want to be seen as cooperative, not difficult, said Jill Matarelli Carlson, associate professor and intimacy choreographer for ECU's upcoming production of "Into the Woods."

"For a long time, actors were told to figure it out," Matarelli Carlson said. "But an actors' emotional and mental health are equally as important as taking care of someone's physical safety. We are not there to police, sanitize or make everything PG. We are advocates to make sure the director gets the story they want, and the actors have more say in what's going to happen. Collaboration results in better storytelling for the audience."

Intimacy isn't confined to bedroom scenes. It's any sort of human interaction and contact from onstage chemistry or kissing to a touch on someone's hand, back or leg, said Matarelli Carlson, who's in the Intimacy Directors International (IDI) apprentice program. She has served 15 years as fight choreographer and movement coach for ECU productions. 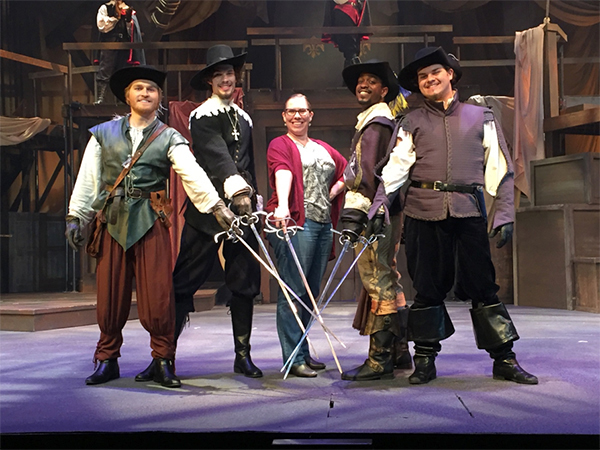 Jill Matarelli Carlson, center, poses for a photo with student actors in “The Three Muskateers” earlier this year. | Photo: Contributed
"With scenes of violence, we understand that we aren't really fighting. There's a technique that's choreographed. We aren't really mad at the person in the scene with us," Matarelli Carlson said. "But in scenes with intimacy, you are really kissing. Feelings do come up and they're real, however the circumstances that created the feelings are fictional. We are looking to un-blur those lines."

Intimacy directors help actors set boundaries and reach closure after performances end. Matarelli Carlson describes it as "tapping in" and "tapping out" of scenes.

"For students, we want them to have an understanding of what the professional world expects. We also want them to know that they have a right to say no, and to offer other options," Matarelli Carlson said. "For the longest time, the industry standard has been that you don't say no to anything, which - in extreme cases - led to abuse."

As ECU implements best practices for intimacy protocols in theater and dance, it also is introducing students to an emerging career field. "The demand for intimacy directors and choreographers has outpaced the number of people available," Matarelli Carlson said.

They have become important members of artistic production teams, partly in response to the #MeToo and #TimesUp movements and the Harvey Weinstein scandal, she said.

ECU’s School of Theatre and Dance will host its first intimacy workshop Nov. 8-10. Sessions will be in the Messick Theatre Arts Center and Mendenhall’s Great Rooms.

ECU is believed to be the first university in the UNC system offering intimacy training.

About 250 College of Fine Arts and Communication faculty and students will be introduced to intimacy practices and protocols to serve as a guide for class and rehearsal settings.

Participants also will investigate techniques for working on peer-to-peer projects or scene work outside of class. The workshop is designed to better integrate intimacy practice at ECU, emphasizing consent in rehearsal and performance spaces. Exercises will be introductory, and no kissing will be required.

The workshop will be led by Intimacy Directors International (IDI) instructors Dan Granke and Jessica Steinrock.

IDI is a not-for-profit organization whose members created what are now the accepted standards for theater, TV and film. IDI is the premier organization for training and certifying new intimacy directors and coordinators.

"When we go into the real world, we know there's a safety net," said Gabrielle Goodman, a junior from Raleigh who is majoring in theatre arts with concentrations in professional actor training and musical theatre.

Goodman will portray the baker's wife in the upcoming ECU production of "Into the Woods," which opens Nov. 20. She has a kissing scene with Wain Richardson, a senior theatre arts major in professional actor training from Virginia Beach, Virginia, who portrays the baker. The couple live in a house that has been cursed. To break the curse, they have to gather specific objects in the woods, where they encounter fairy tale characters while rediscovering their love for each other.

"It doesn't come as scary to me. Your character is like putting on your coat," said Goodman, who has had roles that included kissing scenes going back to high school. She has been involved in musical theater since she was a child.

Richardson said his first time working with Matarelli Carlson as intimacy choreographer was in ECU's production of the "The Three Musketeers" earlier this year. While there was no actual kiss, there was sexual tension throughout the play because of forbidden love.

One scene required Richardson to grab his acting partner by the waist. "We went over what could fly and what couldn't fly with that (before the production)," he said.

Working with Matarelli Carlson brings peace of mind, Goodman said. "It's very calculated so everyone is comfortable, and no one is overstepping a boundary. It definitely feels better to have someone choreograph it so you can add layers to it."

For Richardson, he said choreography allows for creativity to flourish because actors have discussed what they are comfortable with ahead of time.

"If we talk about it first, we have the freedom to express ourselves and act on impulse. We can stay in our imaginary circumstances, go 100% acting through the scene, and leave them right after," he said.