Imagine you've been given the task to argue that an industry needs government support to survive. How do you think you'd make that case?

You probably wouldn't. Then again, you're probably not Gov. Roy Cooper. He did all those things in the first three paragraphs of his press release announcing the creation of a "Governor's Advisory Council on Film, Television and Digital Streaming." This group will "advise Gov. Cooper on efforts to grow and develop North Carolina's film industry and support the work of the State Film Office."

It's a reasonable expectation that this council will push first for returning the film grants program to the (likely unconstitutional) refundable tax credits for film productions. Cooper's first budget sought the same. If they can achieve that, the next step will be blowing the door wide open on how much taxpayer money can be spent "refunding" out-of-state film companies with no practical tax liability here. Return it to an open draw on the State treasury removed from budget appropriations (completely counter to Article V, Section 7 of the State Constitution), and the sky's the limit.

Presumably, the group will also be advising the governor to ignore any non-industry studies of state film incentives. Peer-reviewed academic literature on film incentives has been highly dubious of those programs as ways to grow a state's economy. So have state governments' reviews of their own film incentives; see the list here (all finding returns of mere pennies per dollar).

Most recently, a 2019 study from Western Carolina University's Center for the Study of Free Enterprise examined "What Do Film Incentives Mean for North Carolina's Economy?" The study by John Charles Bradbury, a professor of economics at Kennesaw State University and a faculty affiliate with the Bagwell Center for the Study of Markets and Economic Opportunity, found that:

North Carolina's film incentives, which have cost the state over $400 million, do not appear to have delivered the promised economic boost. For this reason, policymakers may wish to reconsider the state's commitment to the incentives.

Bradbury's findings were consistent with the academic literature on the subject. North Carolina is hardly unique in not being able to boost its economy by incentivizing film productions at the expense of other things. Surveying the research literature, Bradbury wrote:

In summary, researchers do not find film incentives to be strongly correlated with film-industry activity, size, stability, or employment in states. Furthermore, film incentives do not appear to boost state economies.

The findings are consistent across many studies using a variety of empirical methods, which indicates a strong academic consensus that film incentives are impotent as an economic-development tool.

A 2017 study published by the Journal of Economic Geography by economists Mark F. Owens of Penn State University and Adam D. Rennhoff of Middle Tennessee State University looked at the impact of tax incentives on filming location decisions. They estimated the return on investment for North Carolina's program at 22 cents per dollar.

Nor was North Carolina unique among the states in Owens and Rennhoff's findings. No, they found that "movie incentive programs are revenue-negative for states." I created this chart from their findings: 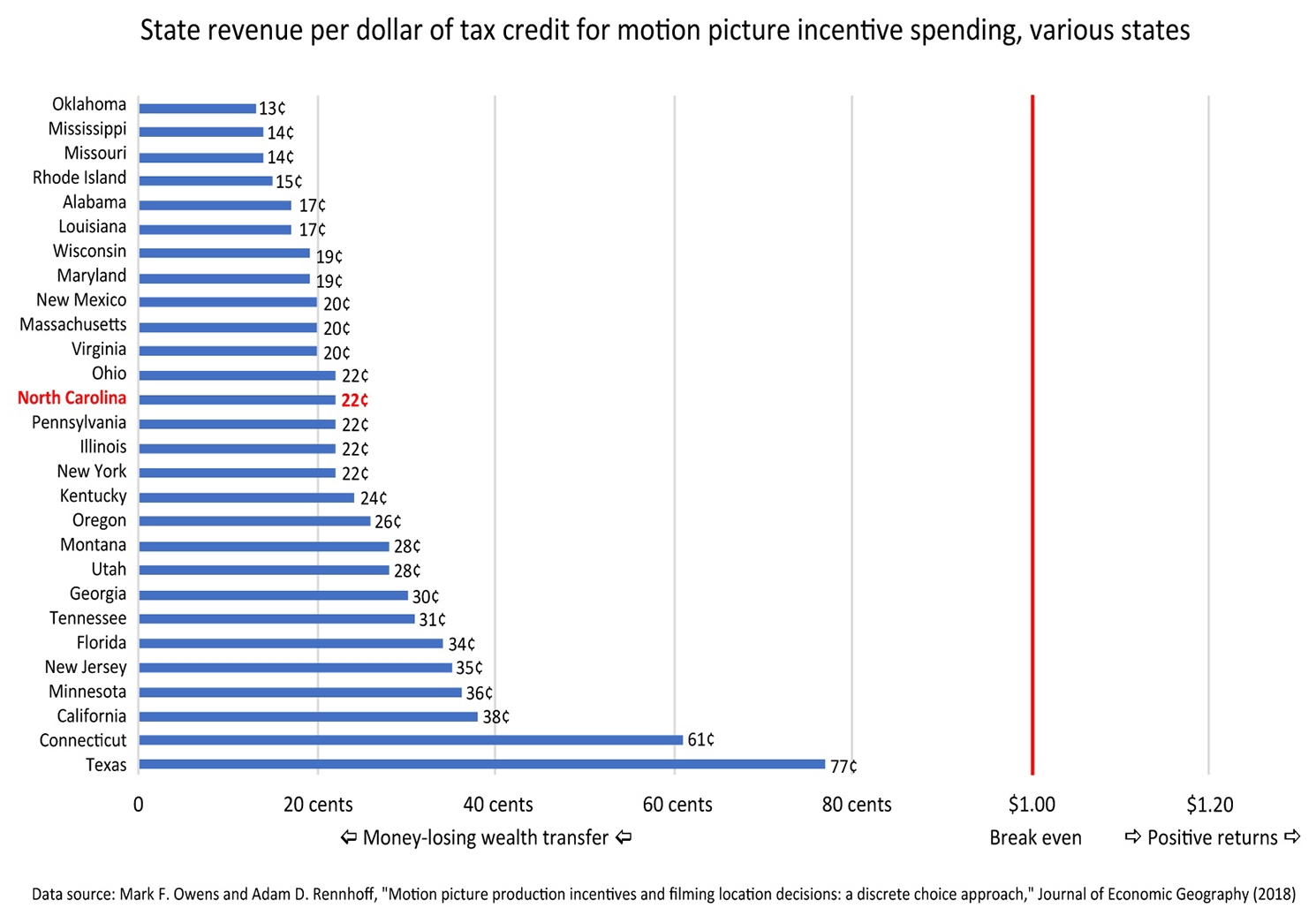 State film incentives programs intended to boost the economy have been tried, tested, and found wanting. But guess what? Research shows they have limited ability even to boost just the state's film industry without respect for the overall economy.

Research finds that film incentives also only benefit outside film production companies but create a political economy based on rent-seeking. Recipients are gaining notoriety for threatening to refuse incentives as a way to extort their preferred social policy choices.

How could a governor's advisory council on film incentives actually serve the public interest? By reminding the governor that these programs don't work and do more harm than good.