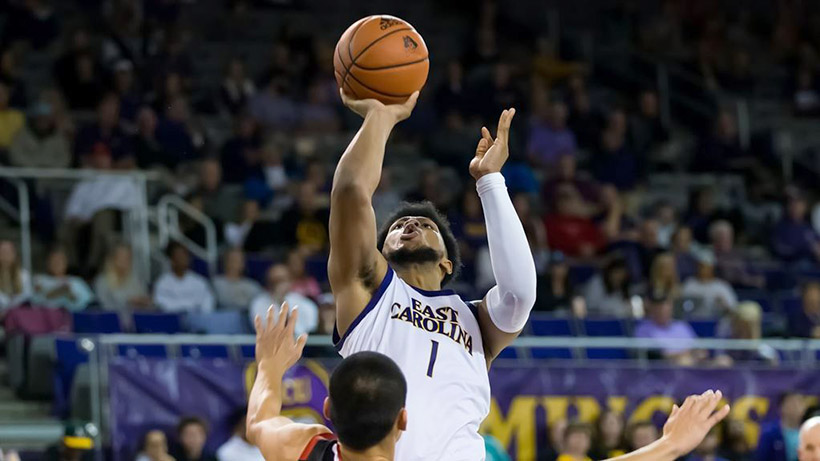 Gardner, whose layup with 14:31 to play to the Pirates ahead to stay, also grabbed 11 rebounds for his 11th career double-double.

Newton shot 6-of-12 overall from the field and made 3-of-5 attempts beyond the arc, while handing out four assists without a turnover. Fellow freshman Brandon Suggs added 12 points to go along with four assists and four rebounds.

"The freshmen did a great job of keeping the ball in front of them," coach Joe Dooley said. "Tristen did a great job with some really good plays and didn't turn it over in 34 minutes, and obviously Jayden had a big game. We had to go small because they had us spread out a little bit. Hopefully that helped us win the game."

After trailing by two at halftime, 38-36, ECU opened the second half on a 15-7 run to go up by six less than seven minutes into the frame as Gardner scored seven consecutive points after Kamdyn Curfman hit a 3-pointer with 16:22 to play and gave the Keydets a 45-44 lead.

Freshman Logan Curtis buried a critical 3-pointer to push the Pirates out to an eight-point advantage with 8:20 to go.

ECU held its largest lead with 1:40 remaining as Newton sank a pair of free throws.

"I came in pretty confident," Newton said. "My teammates have been telling me I'm built for this and I'm ready, so I'm pretty prepared."

After allowing the Keydets to shoot 45.2 percent from the floor in the first half, the Pirates buckled down in the second and limited them to just 30.6 percent shooting in the final 20 minutes and just 3-of-13 outside the arc.

The Pirates shot over 50 percent from the field in each half and finished at 53.4 percent (31-of-58) overall, scoring 48 points inside the paint.

ECU returns to action Friday, Nov. 8, against Navy as part of the Veteran's Classic in Annapolis, Md.. Tip-off is scheduled for approximately 8:30 pm and will be televised on CBS Sports Network.

POSTGAME NOTES
POSTGAME QUOTES     East Carolina Head Coach Joe Dooley     On the game ...     "I thought we had jitters like we expected, especially early in the game. I thought we were very sped up on offense, a lot is to them switching men. We got a little discombobulated for a while offensively and turned it over and missed layups. I thought our defense changed in the second half, and obviously we didn't give up as many easy layups. I thought the freshman guards did a great job of keeping the ball in front of them. Tristen obviously made some really good plays, didn't turn it over in thirty minutes, and I think Jayden had a good game. We had to go small, because they had us spread out a little bit.

On VMI...     "They took the floor, their five man's playing on the perimeter, which you don't see a lot of. Navy will do that a little bit, but they got a way of making plays in the post. [Jake] Stephens did a good job of spreading us out and they back doored us. They made their first last four 3s in the first half and had us on our heels a little bit. [Our] guys did a better job in the second half, only giving up three 3s."

East Carolina Sophomore Forward Jayden Gardner     On his performance with so much focus on the newcomers...     "I just go in and do what I got to do. Pirate Nation, this is the wakeup call, I'm still here, I'm still beast mode, I'm still going hard."

On working the baseline...     "I just had to get behind the defender, and then my teammates were great throwing the ball up so only I can get it; and then on the weak side, I just had to finish. My teammates set me up great all night.

East Carolina Freshman Guard Tristen Newton     On his comfort level...     "The whole team in practice has been telling me, "Work hard, it's your chance, work hard." So, they got me prepared me for this, all thanks to them."