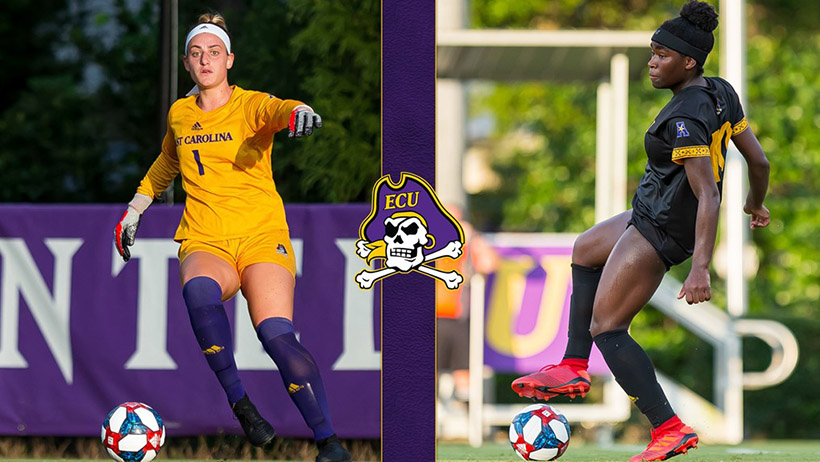 PROVIDENCE, R.I.     Kim Sanford and Melanie Stiles were both defensive stalwarts for the ECU soccer team and their performances earned each Second-Team All-Conference honors, as announced by the league office on Tuesday.

"We are very happy for both Melanie and Kim to receive these honors in such a strong conference," said head coach Jason Hamilton. "They both are very deserving of it as they put the work in since last year ended to improve their game. These two lead our team in minutes this season and that was for a reason."

Sanford was a rock in the center of the Pirate defense, playing a team-high and career-best 1,672 minutes. Sanford went the distance in 17 of the 18 games and was not subbed off in the final 14 matches. The Philadelphia, Pa., native helped ECU finish with six shutouts and allow just 1.39 goals per game. That average dropped to just 1.22 goals against conference opponents and the Pirates allowed multiple goals in just two league games.

"I thought Kim was one of the best center backs in the conference this year," said Hamilton. "It just so happens to be one of those positions where players are very rarely recognized unless they get on the stat sheet with a goal or an assist. I thought she was one of the most consistent players for us throughout the season and most importantly, began to develop into a great leader on the field towards the end of the year."

Stiles started all 18 games for ECU in the goal and finished with 91 saves, the most for an ECU goalkeeper since Saundra Baron had 91 in 2015 and just the 12th time a Pirate keeper has made at least 90 stops. Stiles finished with six shutouts on the season and allowed just 1.35 goals per game. The redshirt junior from Bowie, Md., had maybe her best game as a Pirate when she made 10 stops against then No. 8 Memphis to help ECU earn a 1-1 draw. That performance, along with four stops in a 3-0 win over Tulsa, earned Stiles the AAC Goalkeeper of the Week award.

"Mel has been fantastic in both years here," Hamilton said. "91 saves this season and 87 last season with 11 shutouts are great numbers for a goalkeeper. She is exactly what you want in a keeper, she makes the saves you expect her to make and comes up with one or two big ones each game to give her team a chance to win."

It is the first career All-Conference honor for both Stiles and Sanford. Stiles was also named to the 2018 AAC Championship All-Tournament team. It is the second consecutive year that ECU has put a pair of players on the All-Conference teams following Courtney Cash and Jayda Hylton-Pelaia in 2018.