Harry Smith, Former UNC Board of Governors Chairman, Resigns From the Board | Beaufort County Now

Harry Smith, former chairman of the University of North Carolina System’s Board of Governors, has officially resigned from the board. carolina journal, harry smith, board of governors, chairman, november 5, 2019
Home
Categories
Login

Harry Smith, Former UNC Board of Governors Chairman, Resigns From the Board 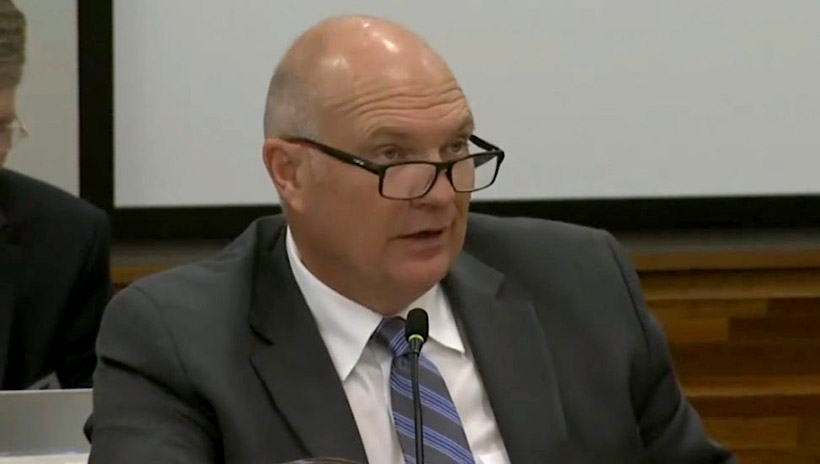 UNC Board of Governors Chairman Harry Smith speaks during the Sept. 20, 2019 BOG meeting.

Harry Smith, former chairman of the University of North Carolina System's Board of Governors, has officially resigned from the board.

In September, after months of publicly tense relationships with some members of the body, Smith announced he would step down as board chairman Oct. 1. At the time, he remained on the board.

Now, the Greenville businessman is leaving for good. Smith needs to spend more time with his businesses, he told Carolina Journal on Monday, Nov. 4.

"I've been not trying to hide the fact that I was planning on exiting," Smith said.

Smith said he will serve on the board until Feb. 1. He plans to "stay involved from an advocacy standpoint."

The announcement follows the release of a WBTV story tying Smith to Peter Romary - a Hillsborough lawyer who played a role in the resignation of East Carolina University Interim Chancellor Dan Gerlach.

Romary, who works for Qverity, a private investigation firm, obtained security video of Gerlach walking shakily down a Greenville street the same night he was photographed drinking at a bar near campus. In the video, Gerlach climbs into a car and drives away.

More than a year ago, Romary did a background check on a candidate for the then-open chancellorship at Western Carolina University, this time at the direction of board member Tom Fetzer. Romary's investigation upended the search and upset several board members.

In an Oct. 28 letter from Romary to Tom Shanahan, UNC's senior vice president and general counsel, Romary confirmed a relationship with Smith - but didn't specify the nature of services rendered.

"Harry Smith hired me through Poyner and Spruill, and I have the letter of engagement containing scope of work," Romary said. "I have compiled information for Harry and submitted the same. I cannot and will not provide you with said letter unless Harry Smith tells me to do so and waives privilege."

CJ asked Smith about his relationship with Romary. Smith said he never paid Romary for information. He said he played no role in Gerlach's resignation.

Romary has "called me from time to time, and I've always passed that information on to the system office," Smith told CJ. "And so, you know, that's my only relationship with him. You know, I've never one time contacted him, proactively."

"We never paid Peter a dime, never used the information in any way, shape, form, or fashion," Smith added, noting he only heard from Romary about issues related to former ECU Chancellor Cecil Staton. "Nor did we seek his help. He offered it. That was it."

Smith's history on the BOG


Smith first joined the UNC Board of Governors in 2013. He was a Senate appointee under Senate Leader Phil Berger, R-Rockingham. Smith was reappointed in 2017. His term was originally set to end in 2021.

His tenure interlaces several periods of conflict on a board increasingly divided by personal politics and policy differences. In 2015, Smith sat on the board as former Chairman John Fennebresque worked to fire then-UNC System President Tom Ross.

Publicly, Fennebresque praised Ross but wouldn't answer questions about how - or why - the board decided to push him out.

Then came the rise of former UNC President Margaret Spellings, a Texan with political chops honed during her time as U.S. secretary of education in the George W. Bush administration. During the Spellings era, the board transitioned to leadership under former Chairman Lou Bissette, an Asheville attorney who appeared publicly cordial and congenial with the university president.

Bissette stepped down as chair in 2018, and Smith took his place, bringing a more aggressive, hands-on leadership style to play.

"My goal is to make Margaret the most successful [UNC] president in history," Smith told Carolina Journal in July of that year, shortly after taking office. "I serve at the will of the board. I'm always going to engage the board - and the officers - and I'm going to work in a really healthy manner with the president and her team."

Spellings resigned just four months after Smith made that statement.

"All leaders are for a time," she said, dodging questions about specifics.

More than two years remained on Spellings' contract at her time of resignation.

One week later, Dr. Bill Roper, CEO of UNC Health Care, was announced as interim leader of UNC. CJ also learned from reliable sources that Staton planned to resign from ECU in early 2019.

In November, Smith, an ECU alum, recused himself from all interactions and communications with the university. CJ later identified emails and photos that showed Smith's involvement at ECU never ceased.

Staton resigned his post in March, stating, "There are some storms you cannot weather." The former chancellor said he didn't initiate the resignation.

Most recently, Roper announced he will leave his post by June 30, 2020. The search for a permanent president is ongoing. Four universities in the system also are currently without permanent chancellors. Chancellor Phillip Dubois at UNC-Charlotte will retire next year, creating a potential fifth vacancy.