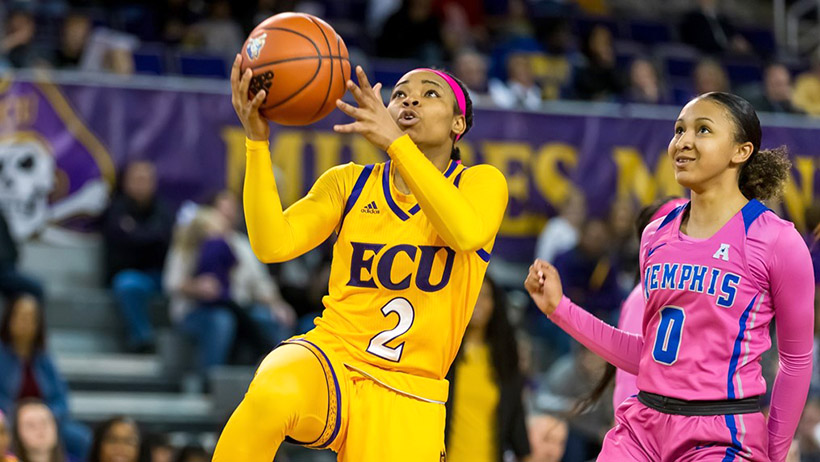 GREENVILLE, N.C.     In front of a potential record crowd, the ECU women's basketball team will start its season and the Kim McNeill era on Wednesday morning as the Pirates take on Middle Tennessee State inside Minges Coliseum.

It will be the first game in charge of the Pirates for McNeill who was hired to take over the ECU program in March. McNeill will return the Pirates' two top scorers from last season in Lashonda Monk and Raven Johnson. Monk was named to the Third-Team All-Conference team after she led ECU with 13.2 points per game and was fifth in the NCAA with 116 steals. Johnson was right behind Monk with 12.5 points per game and led the team in rebounding, hauling in 6.2 boards a night. The Pirates will be boosted by the return of Dominique Claytor, who averaged 4.8 points and 4.1 rebounds in 2017-18, but missed last season due to injury.

Along with McNeill's staff, ECU will add five newcomers this season. Taniyah Thompson, Xianna Josephs, Katerina Tsineke and Ryann Evans all arrive after finishing sterling prep careers, while Sierra DaCosta was a member of McNeill's teams at Hartford where she was an all-conference selection. DaCosta will sit out the 2019-20 season due to transfer rules.

McNeill comes to Greenville after three seasons at Hartford where her teams were known for their defense. Last season, the Hawks were second in the nation in steals per game and turnovers forced.

Middle Tennessee finished the 2018-19 season with a 23-11 record and reached the second round of the WNIT. The Blue Raiders return two starters and five letter-winners overall from that squad and add nine newcomers. One of those additions to the roster is sophomore guard Anastasia Hayes, who was named to the C-USA Women's Basketball Preseason team after transferring to Middle Tennessee State from Tennessee. Middle Tennessee has played a pair of exhibition games, beating Bethel (64-53) and Martin Methodist (89-63) with Hayes scoring 35 points combined. Her sister, Aislynn Hayes is also a freshman for the Blue Raiders and had 33 points of her own.

ECU and Middle Tennessee have met on the court just once, in 2014. The Blue Raiders claimed a 70-59 win in Greenville, snapping ECU's 26-game home winning streak. That season, the 2013-14 campaign, was the sole season that ECU and Middle Tennessee were both in Conference USA. Jada Payne led the Pirates with 18 points, six rebounds and two assists.

Wednesday's game will also serve as the program's annual Education Day as thousands of students from around Pitt County comes to Minges Coliseum to see the Pirates play. Last season, a new record was set as 6,276 fans saw ECU top Liberty 66-63 thanks to a last-second Justice Gee three. Since Education Day was started in 2014, the top five crowds in ECU history are all Education Day crowds and the Pirates are 5-0 in those games.

Tipoff is scheduled for 11 a.m., on Wednesday. Fans can stream the game HERE or follow the live stats HERE.