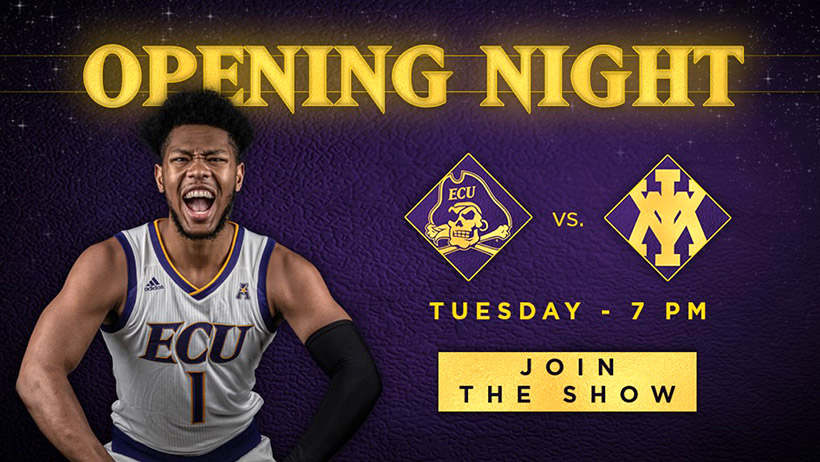 With a buzz surrounding the program like none other in recent memory, East Carolina will lift the lid on the 2019-20 Season Tuesday, Nov. 5, against Southern Conference foe VMI inside Williams Arena at Minges Coliseum.

Both teams are looking to erase the memory of their 2018-19 season in which they each lost 21 games and move forward with a retooled rosters.

Gardner led the Pirates in 11 statistical categories as a freshman, including scoring (16.0 ppg) and rebounding (8.5 rpg) and was unanimously named to The American All-Rookie Team.

LeDay finished third on the team in scoring (11.0 ppg) and second behind Gardner in rebounding (5.8 rpg), but missed the final two games of the season due to injury; one he's ben rehabbing all summer to get ready for his final campaign.

Junior college guards Bitumba Baruti, Miles James and J.J. Miles along with freshmen Tristen Newton and Brandon Suggs are expected to provide a jolt to the offense, while Gardner and LeDay accounted for 40 percent of last season.

Charles Coleman, Ludgy Debaut and Edra Luster give the Pirates needed size and depth on the interior. ECU finished last in The American in rebounding in 2018-19 with a negative rebounding margin.

Without the services of sophomore guard Tremont Robinson-White, who has yet to practice with the team due to injury, and the questionable status of junior guard Tyrie Jackson, freshman Logan Curtis could also see some time at point guard.

VMI returns nine lettermen and added six newcomers to their roster. Senior Garret Gilkeson and junior Myles Lewis each averaged over 10 points per game a year ago and are the Keydets' top returning scorers.

East Carolina, who was won 29 of its last 30 season openers, will be looking to extend its streak of opening night wins to 21 and home opening victories to 19.