ECU Celebrates Military, Is Named One of Top Schools for Veterans 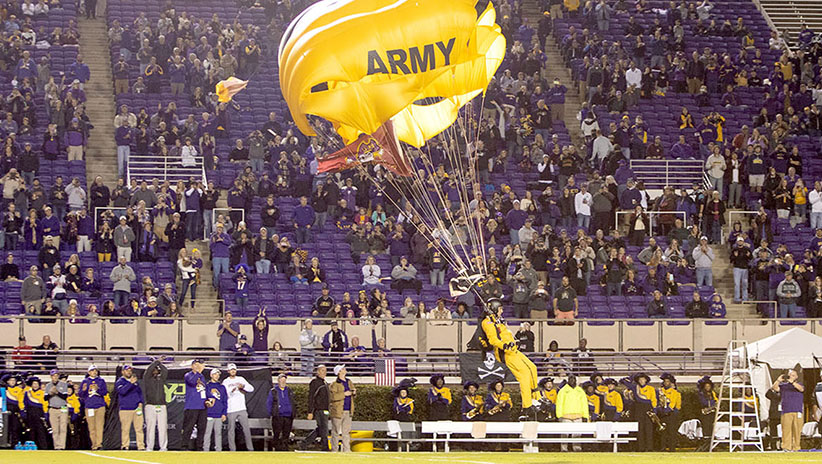 In one week, East Carolina University inducted two members into the Distinguished Military Service Society, hosted its annual Military Appreciation Day football game and was named one of the best universities in the country for veterans.

"Shining a light on our military is an important part of what we do," Interim Chancellor Ron Mitchelson said. "At ECU, our military connections, relationships and appreciation are substantial. And our commitment to veterans is real and authentic."

There are 863 military students - veterans, active duty, reserve and guard members - currently enrolled at ECU. The university provides a variety of programs that support military students, including a veteran-to-scholar summer bridge program, veteran-specific orientation, a student veteran lounge on campus, peer mentoring and a veteran success counselor, among others.

Such a military-supportive culture was one of the reasons the Military Times named ECU to its 2020 Best Colleges for Veterans list. The news outlet surveyed hundreds of colleges and universities from across the country on their policies related to military and veteran students, academic outcomes and cultures. ECU made the list for the fifth year in a row.

At the Military Appreciation Game on Saturday, multiple activities honored and celebrated all five branches of the military. Before the Pirates kicked off against the Cincinnati Bearcats, the U.S. Army Golden Knights parachuted into the stadium, sporting Jolly Roger and No Quarter flags from their packs. U.S. Air Force Lt. Col. Ed Tadlock and U.S. Army Maj. Gen. Kurt Ryan served as the honorary captains for the game. The football team then ran onto the field with the five military branch flags.

At halftime, four eastern North Carolina military base commanders and two inductees of the Distinguished Military Service Society were honored by the chancellor's office. Songs for each of the military branches were played to allow all veterans in the stands the opportunity to be thanked for their service. Throughout the game, several shoutout videos from deployed military service members played on the video board.

The night before, the Distinguished Military Service Society honored service to the nation and service to ECU. This year's inductees are retired Col. Bryan Bennet and retired Lt. Col. William "Bill" Miller. Both Bennet and Miller served in the United States Air Force and are ECU alumni. 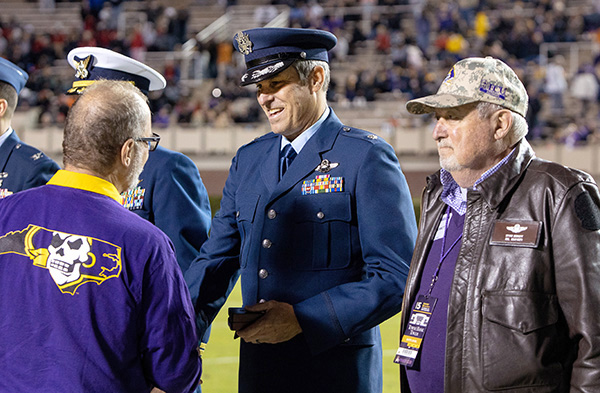 Distinguished Military Service Society inductees retired Col. Bryan Bennet and retired Lt. Col. William Miller were recognized on the field at ECU’s Military Appreciation Day football game.
"It is particularly important to recognize military servicemen and women because our region is home to one of the largest clusters of military installations in the U.S. ECU's mission of student success and regional transformation mandates exactly this type of emphasis on military and veterans at ECU," said Scott Francis, associate vice chancellor for alumni relations, which hosted the event.

In his service, Bennet clocked more than 4,000 flight hours, including more than 400 hours of combat time and 60 combat missions. He was awarded the Legion of Merit, Meritorious Service Medal, Vietnam Service Medal and Air Force Commendation Medal. At ECU, Bennet established a study abroad scholarship to Russia for political science students. In addition, he mentored many ROTC and political science and students.

Miller served during Operation Iraqi Freedom and Operation Enduring Freedom, in which he flew highly classified missions into various areas, delivering joint special operations forces and their equipment to eliminate threats in the global war on terrorism. He was awarded the Defense Meritorious Service Medal with two oak leaf clusters, the National Defense Service Medal with Bronze Star and the Air Force Outstanding Unit Award, among others. Miller also funded an ECU ROTC scholarship for the past 10 years.

"The cadets today are our future," Miller said. "They're going to go out and fight the good fight and make our nation a little better each day."

ECU recently restructured its military and veterans activity to operate under one governing body. All related functions and resources have been streamlined under the Chancellor's Military Advisory Commission, whose mission is to provide exceptional educational opportunities and support for active military, veterans and their families, said Francis, who is overseeing many of the new initiatives.

The Chancellor's Military Advisory Commission (CMAC) is charged with inventory and coordination of military support and activities. CMAC has five subcommittees: research and engagement, regulation, recruitment and retention, military academic programs, and recognition. Prior to the reorganization, there were several external and internal groups providing military support and services that were not unified in their efforts or communication, Francis said.

"Because these activities are situated across the university, there is clear need for an oversight entity to span the institution," he said.