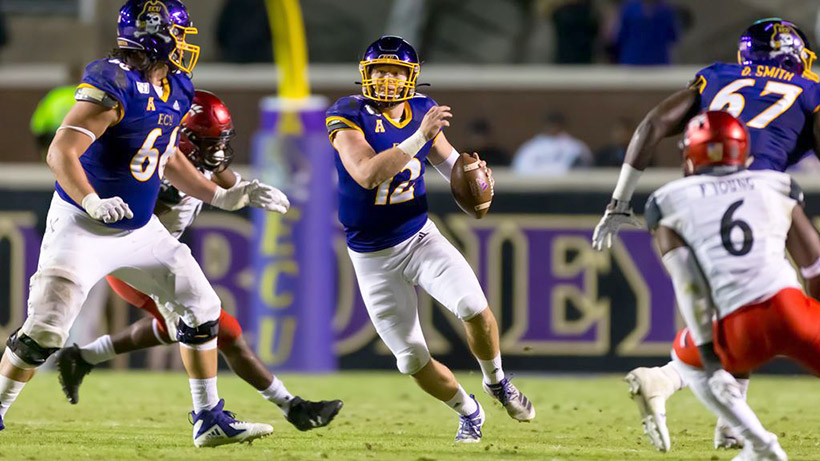 The Pirates, on the receiving end of a couple of one-sided losses in consecutive weeks, managed to dig deep and find the fortitude to respond to that challenge, taking shot after shot after shot at the No. 17 Bearcats. And with momentum and confidence at a season high, ECU found itself up 12 points heading into the final quarter.

One play - an interception returned for a touchdown - zapped much of that energy, then Sam Crosa's 32-yard field goal on the game's final play dashed the Pirates' bid for a stunning upset as the Bearcats escaped Dowdy-Ficklen Stadium with a 46-43 American Athletic Conference victory.

The loss on a night in which the military and ECU's newest class of hall of famers were honored leaves the Pirates still winless in the AAC at 0-5 and at 3-6 overall but with a sense that they are on the verge of terminating a long hiatus of savoring victory.

"We're almost there," said sophomore safety Daniel Charles, who gave the defense a first-half jolt with a pair of interceptions. "Everybody's making plays. All my teammates are making plays. We've just got to get over that last little hump and finish the game."

That's what a Cincinnati team vying for an AAC division title did in extending its win streak to six games, despite yielding a whopping 638 yards and a pair of record-setting performances by ECU sophomore quarterback Holton Ahlers and dynamic freshman receiver C.J. Johnson. The Bearcats (7-1, 4-0) AAC showed their grit with an 18-3 advantage in the final quarter, draining the final 1:10 off the clock on their winning drive.

"We didn't have it all tonight," Cincinnati head coach Luke Fickell said. "We lost our emotions in the first half. We just couldn't gather ourselves. To come out in the second half and fight and fight and fight. It wasn't pretty, but to come down here the way we did it ... that's special.

Houston believes his program is building that type of mentality and sensed they came into to Saturday's game relaxed and confident it could stand toe to toe with one of the AAC's best.

"We talked about believing in ourselves, not hesitating and going and making the play," Houston said. "Take our shot. It's been a theme, and we hammered it this week, justifying the things that we believe in. And the kids went out and did that.

"To go out there and play that way, you just hate not to get the win,' Houston said. "We had some incredible individual performances, but the thing you focus on is what a great effort by our kids. There's no moral victories. This one hurts. You win this one you put yourself in great shape to achieve several of the goals we set out to, and so it hurts."

Ahlers and Johnson, who grew up in Greenville and formed a special chemistry on the field at Conley, did all they could to entertain a sparse but enthused turnout of 32,273 and get the Pirates over the three-win threshold for the first time in four years.

Ahlers, the left-handed sophomore, established an ECU single-game record of 535 passing yards, which also ranks third in AAC history, and matched a career best with four touchdown passes while avoiding a sack for the first time this year. His lone blemish came in the fourth quarter when Ahmad Gardner jumped a corner route, picked off a pass and sprinted 62 yards to give the Bearcats a 43-40 lead - their first since 21-14 in a wild first quarter.

Ahlers' passing total eclipsed the 480 yards amassed by Shane Carden against Tulane in 2013 but obviously would have been more satisfying in a win.

"It means a lot," Ahlers said. 'Obviously growing up in Greenville I grew up coming to games here thinking of what I could be here. But we're young, we lost tonight. I made a decision there at the end that cost us, a pick-six. That was on me. I owe the team one; I owe these fans one."

As he did at Conley, Johnson emerged as Ahlers' favorite target and finished with career-highs of 12 catches and 283 yards, the latter of which set both ECU and AAC records for receiving yards. Johnson's night included a 75-yard touchdown catch and run in the first quarter.

"It means a lot, but honestly I couldn't do it without my team," Johnson said of his record-setting performance. "If we don't have the offensive line protecting for him to throw me the ball, I can't get the ball, and if we don't have other people running routes to take away defenders then I won't be open."

Johnson certainly had company in hauling in passes from Ahlers and tormenting the Bearcats' secondary. Blake Proehl finished with eight catches for 105 yards, Jsi Hatfield had six for 96 yards and a touchdown, Tyler Snead and Zech Byrd also had touchdown catches.

In fact, Cincinnati had few answers to what ECU served up. The Pirates converted 10 of their 17 third downs and were perfect on seven trips to the red zone, although settling for field goals on two drives inside the five ultimately proved costly.

"That's something we've got to improve on," Houston said. "We had our shots down there. We had a couple of play calls right there we didn't execute very well. They were there. We've got to continue to get that cleaned up."

The Pirates did clean up their first-half woes from the last two games in which they were outscored 70-13 by UCF and USF. In fact, both teams found little resistance - ECU striking by air and Cincinnati by ground.

The teams combined for 651 total yards in the first half, but also got nabbed for 16 penalties for 124 yards. Cincinnati, which came in averaging 10 penalties a game, had 10 by the half totaling 89 yards.

Ahlers picked apart the Bearcats' secondary with his best opening half of the year, surpassing his single-game high for the year of 313 with 316 first-half yards, completing 18 of 31 yards with three touchdowns.

The Pirates' defense provided the first spark when Charles intercepted a Desmond Ridder pass, but three plays produced just three yards. Jonn Young's punt then ricocheted off the back of a teammate and traveled just 20 yards, giving the Bearcats possession at midfield. Cincinnati needed eight plays to punch it in for a 7-0 lead, highlighted by a 28-yard blast up the middle by Michael Warren, who spearheaded a 335-yard rushing attack with a season-best 141 yards and scored three touchdowns. Warren did the honors with a 10-yard run.

ECU had a rapid-fire answer in just 11 seconds with Ahlers hitting Johnson along the sideline for a 75-yard score, but the Bearcats responded in three plays and 50 seconds, taking a 14-7 lead on a two-yard run by Gerrid Doaks.

A six-yard run by Ahlers tied it at 14-14, but Warren scored again on a one-yard run for a 21-14 lead just 19 seconds before the end of the first quarter.

ECU tied it at 21-21 with 5:57 left in the half, aided by a Cincinnati defense losing its composure and being flagged four times for 50 yards, including a pair of pass interference penalties on Coby Bryant and a personal foul. The score came on a third-down play when Ahlers flipped a 3-yard pass to Byrd.

Ahlers added a three-yard pass to Hatfield for a 28-21 lead, then Charles' second interception at the Cincinnati 48 just 23 seconds before halftime gave the Pirates a chance to extend the lead. A sensational leaping catch by Johnson picked up a big chunk of 33 yards, and Jake Verity knocked through a 27-yarder for a 31-21 lead.

Cincinnati opened the second half with a nine-play drive to get within 31-28. Ridder kept the drive alive with a 32-yard scamper up the middle on third down, and Warren scored his third touchdown of the night and 27th of his career, taking a direct snap and running in from the three.

The Pirates chewed up 6:25 on their first possession of the second half, marching 15 plays with Johnson coming up with three more receptions. The drive reached the three before stalling, and Verity booted a 20-yard field goal.

Ahlers hooked up with Snead for nine yards and a 40-28 lead after the two-point try failed.

The Bearcats were not dead yet, however. Josiah Deguara caught a three-yard touchdown pass from Ridder, then Gardner's second pick-six of the year put Cincinnati up 43-40.

The interception thwarted a drive that could have put the game out of reach.

"It was tough," Houston said. "It was back-and-forth game, but we had the lead, we were driving. It's just a mistake. It's one you hate to see. Holton will learn from that. Great play by their kid."

ECU regrouped and drove to a game-tying 27-yard field goal by Verity. UC took over at its 35 after a poor kickoff, and a 30-yard run by Ridder put the Bearcats in striking distance.

"Credit to the kicker from Cincinnati," Houston said. "That's a heck of a kick. That's a big-time, pressure kick. I've been in this ballgame a lot of times over the years, and I've seen that kick shanked a lot, especially on the road. What a gutsy kick by him."

For ECU, it's another step toward in a long building process.

"Every week we work on let's take a step forward, we can't go backward." Senior defensive tackle Alex Turner said. "Coach Houston, he preaches that a lot to us, 'Don't take any steps backward.' We just got down to it and prepared really hard this week. You could tell that from the game. Guys were executing at a high level and making plays. It just didn't come together at the end."