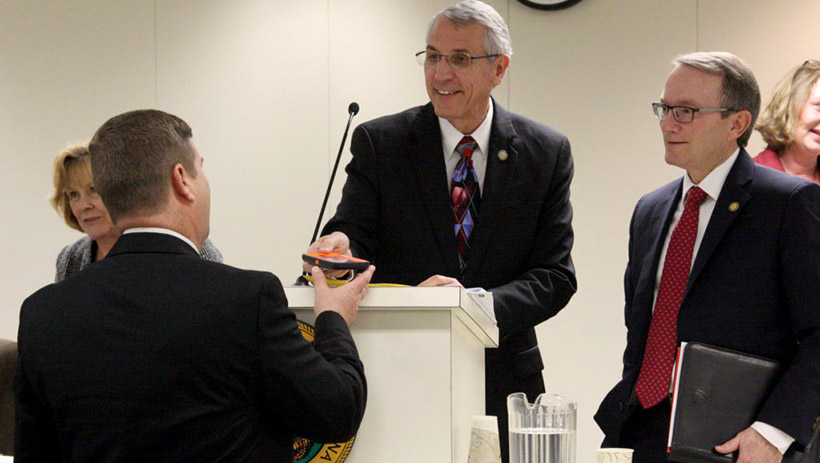 The vape tax disappeared by the time its mini-budget made it to the House floor.

But despite a few protests over the stripped vape tax, S.B. 557 passed the House on its second reading 77-32.

The bill is a pivotal part of the Republican tax reform: it would cut the franchise tax on companies by expanding the definition of a holding company, and it would raise the standard deduction for income-tax filers by 7.5%.

On the House floor, Rep. Gale Adcock, D-Wake, who sponsored the vape tax, asked representatives to send the bill back to the House Finance Committee. When her request failed, she called for the bill to be shot down.

"This morning it had a very strong voice vote in support, but [the bill] came to Rules without that language," Adcock said, asking to return the bill to committee. "No good process has been used today for these two bills."

Her amendment would have thrown e-cigarettes and vaping products into the same tax category as other tobacco products, which are taxed at 12.8% of the manufacturer's cost. Currently the state collects 5 cents for every fluid militer of e-liquid sold.

Vaping began to dominate the headlines when Juul was accused of addicting millions of teenagers to nicotine. When the national tally of unexplained vaping-related lung injuries climbed past a thousand patients, states began to consider vaping bans, while the Trump administration planned a national flavor ban.

Some 86% patients with lung injuries self-reported vaping blackmarket products with THC, the chemical responsible for the high in marijauna, according to the Center for Disease Control and Prevention.

Vape shop owners argued that the tax was misguided. They blamed the lung injuries on blackmarket products, and they argue that e-cigarettes are a harm-reduction tool, not a clone of traditional combustible cigarettes.

The sole representative who spoke against the vape tax in the Finance Committee, Rep. John Szoka, R-Cumberland, pledged to target the vaping issue in separate legislation on the House floor.

"Tax policy is complicated," Szoka said. "In theory I understood what the amendment sponsor and the folks behind it were trying to do. In finance I said I would work with them to work through the issues, of which there were many. Because it's not just a tax issue, there are policy issues involved."

Adock acknowledged his pledge to work on the vaping crisis, but still asked the House to vote against the bill.

When that appeal failed, she objected to an immediate final vote, keeping the bill alive. It's on Thursday's calendar for final approval.