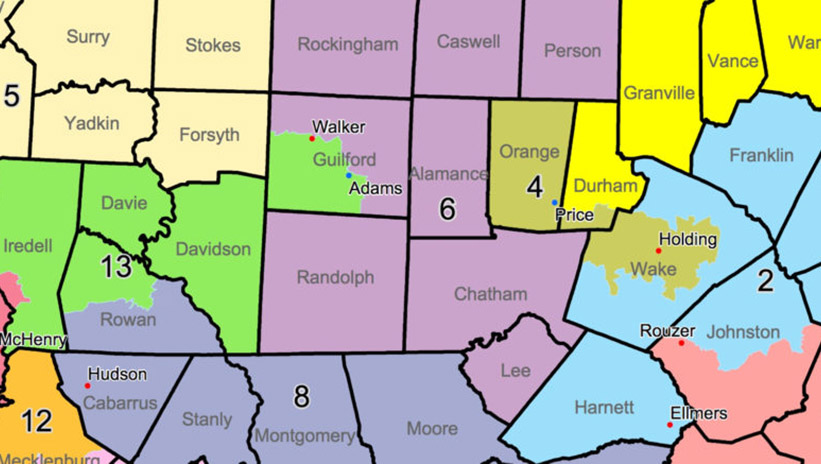 Don't retire the lottery machines just yet. Experts say the General Assembly may soon enter another round of map redraws.

The speculation stems from an Oct. 28 court injunction, in which a three-judge panel in Harper v. Lewis ordered no preparations be made for the 2020 congressional elections based on 2016 maps. The fact the court was willing to stall election preparations suggests plaintiffs will likely win the case, leaving legislators to draw new maps, said Michael Bitzer, professor of politics and history at Catawba College.

"I think it was a heads up to the legislature that they'll need to address this issue," Bitzer said, referring to the court's injunction.

It's possible lawmakers could begin redrawing those districts as early as Nov. 18, when they return to the capital. Bitzer suspects the court's injunction was intentionally laying the groundwork for the legislature to begin that process.

It's also possible the legislature would redraw the maps without a hearing, Bitzer suggested. If lawmakers do go through with a hearing, it may become necessary to push the primaries back from May. The court has already noted it retains the right to move primary dates if necessary.

That would certainly be the simplest approach, noted former N.C. Supreme Court Justice Bob Orr. The court is already up to speed on the issues because of the July trial involving the state legislative districts, and many of the arguments would likely be the same. It's just a matter of identifying what particular problems need to be corrected.

As far as a timeline for redrawing the maps, it could be relatively short. The state maps were completed within a two-week deadline. Also, there's only 13 districts to consider this time, rather than 120, noted Andy Taylor, professor of political science at N.C. State University. And with the congressional districts, lawmakers aren't drawing their own maps, meaning they might take less interest in "wrangling" them, Taylor said.

He said the 2016 congressional maps would probably be struck down, since they likely violate the same principles the state maps did. By allowing no use of partisan data, the court has set a high bar.

"It's hard to imagine, if the state legislative maps don't clear that bar, that the congressional maps would," Taylor said.

To issue an injunction, the court not only has to have ample evidence plaintiffs will win, but also has to prove that not providing the injunction would cause "irreparable loss." In this case, Orr said, if the court didn't stop the election process with the current maps, North Carolinians would undergo the irreversible harm of voting in unconstitutional districts.

"You won't be able to undo the 2020 elections if you ultimately determine these maps were unconstitutionally drawn," he said.

Nevertheless, the court praised the process lawmakers used to redraw the maps in September, Taylor noted.

"The court was laudatory with regards to the process, calling it bipartisan and transparent," Taylor said. "And I think clearly the Republican majorities in the House and Senate worked hard to do that."