As famously said by former president Barak Obama, the best anti-poverty program is a job. In North Carolina, as of June 2019, there were 1.21 open jobs for every unemployed person on the job market. civitas, open jobs, job seekers, implications, october 29, 2019
Home
Categories
Login

Login to Send a Private Message to Civitas
Publisher's note: This post, by Leah Byers, was originally published in Civitas's online edition.

As famously said by former president Barak Obama, the best anti-poverty program is a job. In North Carolina, as of June 2019, there were 1.21 open jobs for every unemployed person on the job market.

Pew Charitable Trusts completed a similar analysis, framing it the other way around: for every open job, there are only 0.8 unemployed people in the job market to fill it. Business owners may find this news troublesome as they consider moving to or expanding their operations in North Carolina.

In fact, many small business owners expressed that very sentiment as their top concern for the past two years. Wells Fargo and Gallup Polling conduct quarterly Small Business Owners polling. Those surveys have shown that attracting and maintaining quality staff has been the top concern for business owners for the past two years - a fact that I highlighted in a September 2018 article on the subject. (Of note, attracting new clients surpassed the employee concern in the most recent survey).

The imbalance between job openings and unemployment is a positive sign for North Carolina's economy. We have the job creation capacity to support our growing state - largely due to pro-growth tax and regulatory changes implemented in the last decade. However, the imbalance also illuminates a disconnect between the workforce and the available jobs in the state.

Part of that disconnect is likely geographic. With the exception of Mecklenburg County, the state's urban counties have some of the lowest unemployment rates in the state. The Asheville, Wilmington, and Raleigh-Durham areas tend to fare better on employment measures than the more rural areas of the state. 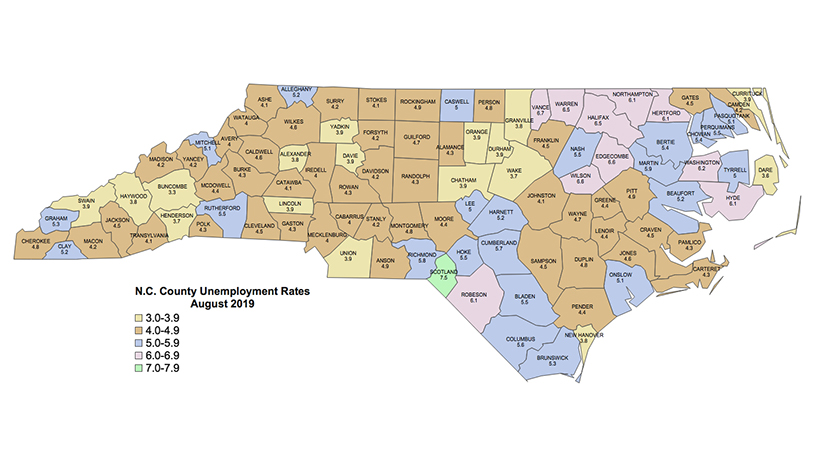 Another aspect of the disconnect between open jobs and the unemployed is the gap of skills and employability. As of 2015, the latest available analysis from the National Skills Coalition, North Carolina had a significant "middle skills gap." This means that 55 percent of the state's economy requires skills between a high school diploma and college degree, but only 45 percent of the state's workforce is trained at that level.

What does all this data mean? Policymakers should consider the disconnect and its sources when making decisions regarding education, workforce, and economic development policies. Specifically, the corporate cronyism of targeted tax incentives often results in the government giving an unfair advantage to certain businesses as reward for actions they most likely would have taken anyway. Instead, provide across-the-board tax cuts - or eliminate corporate and personal income taxes. These policies give businesses the incentive to choose North Carolina, but the freedom to locate where the workforce resides.

Also, the strength of the economy means there is no reason for the state to look at any expansion of welfare programs, including the governor's prized Medicaid expansion proposal. North Carolina already has a safety net in place for the most unfortunate among us to help them get back on their feet. Others have the opportunity to better their situation through economic advancement. The low unemployment rate and high job openings mean that businesses will compete with each other for qualified workers, driving up wages and benefits that they offer.