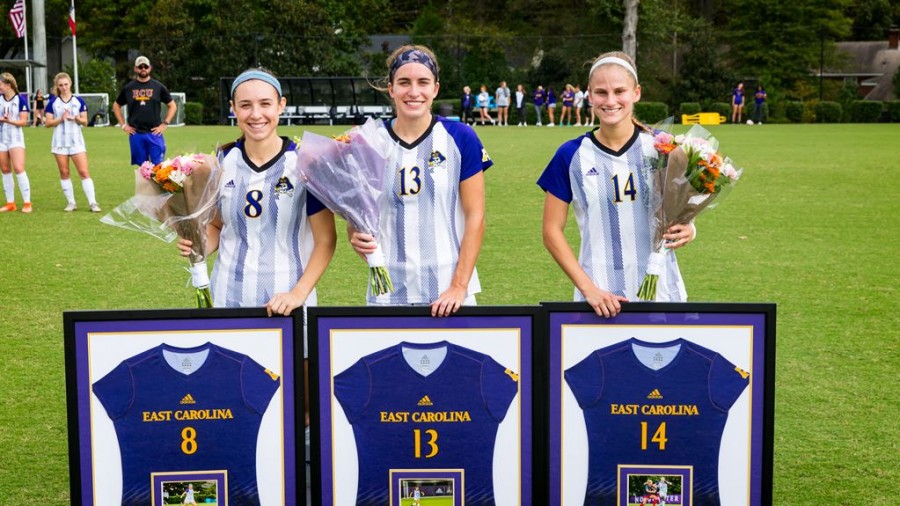 "We're pretty proud of the way our girls played in the first half against a really good team," said head coach Jason Hamilton. "USF came out and scored a goal and we were really proud how we fought back. We clawed our way back into it and tied it up a few minutes later. Then just a bad mistake to give up the second goal. We can't give teams as good as USF gifts, we have to make them earn the goal. Just some miscommunication on our part kind of led to that which is disappointing."

USF was on the front foot for most of the first half. The Bulls, which came into the day with the second-ranked offense in the conference, pelted the ECU goal with 14 shots in the first 45 minutes. Melanie Stiles did an admirable job keeping the game from turning into a rout as she made seven stops, the most she had made in one half this season.

Despite Stiles' saves, USF did take the lead in the 21st minute. Aubrey Megrath got the ball deep in the ECU box and took a shot at a tight angle. Stiles was able to parry away Megrath's effort, but the rebound fell to Andrea Hauksdottir and Hauksdottir powered a shot into the upper half of the goal.

The start of the second half saw a rejuvenated Pirate side come out of the locker room. ECU was able to put pressure on the USF defense and that pressure paid off in the 52nd minute. Maycie McDougal lofted a cross in from the right wing and Jenna Dages used her head to flick it on towards the back post. Dages' touch helped the ball reach Cashlin Copley and Copley buried a first-time effort to tie the score.

Unfortunately, USF regained the lead five minutes later. It seemed that ECU had repelled a USF attack, but a miscue turned the ball over to Fanny Pelletier-Laroche at the top of the Pirate penalty area. Pelletier-Laroche took a rising shot that was too much for Stiles to stop.

The Bulls added an insurance goal in the 62nd minute through the conference's leading scorer, Evelyne Viens. Viens collected a pass from Megrath and was able to maneuver to open space and then used her right foot to let loose a curling effort that found the top right corner of the goal.

"The rest of the way out, we had some players that seemed to not give us what we needed out there," said Hamilton. "That's a little disappointing, just because you're down a goal doesn't mean the game is over. We've got to find a way to be better for the entire game, not just play good in spells. I think that's been the difference these past couple of games. We've played pretty well against some of the top teams in the conference, but as a whole they played well and that's why they left with wins."

USF finished with a 19-5 edge in shots and a 6-2 advantage in corner kicks. Stiles made nine saves for the Pirates while Sydney Martinez made three stops for the Bulls.

ECU will finish the regular season on Thursday, Oct. 31 at Cincinnati. The Pirates will need a victory plus some help from other results to claim a spot in the AAC Championship.