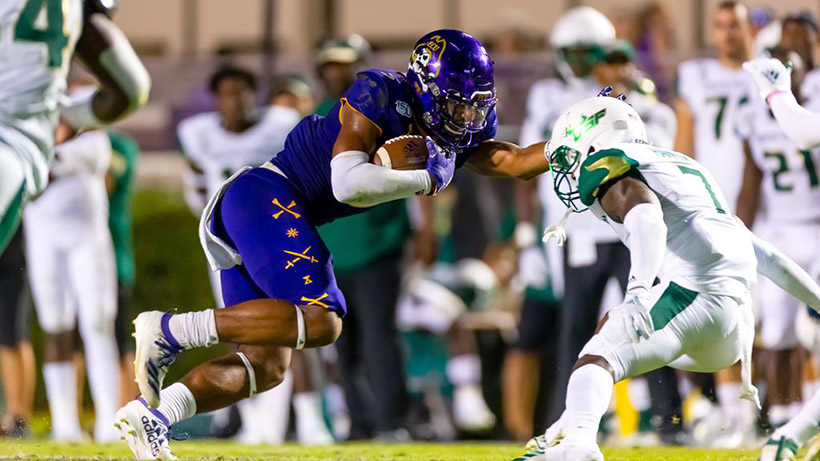 GREENVILLE, N.C.     East Carolina's annual homecoming game on an overcast but comfortable Saturday afternoon couldn't have started with a bigger bang, courtesy of the smallest man on the roster. To the disappointment of a disappointing turnout of 33,088 in Dowdy-Ficklen Stadium, the festive atmosphere ended there.

Tyler Snead's electrifying 100-yard return of the opening kickoff catapulted the Pirates to a quick lead over USF in a showdown of two American Athletic Conference teams vying to get back to the .500 mark, but ECU would head to the half in an insurmountable hole for the second-straight week on the way to a 45-20 loss.

The Bulls (4-4, 2-2 AAC) answered ECU's opening punch with a series of counter punches, reeling off 35 consecutive points before Jake Verity ended the half with a 33-yard field goal. Combined with last week's 35-6 deficit at UCF, the Pirates were outscored 70-16 in the opening half. Unlike the second half against the Knights when ECU (3-5, 0-4 AAC) scrapped and clawed before falling 41-28, there was no hint of a comeback against the Bulls.

In fact, the lone highlight after the opening kickoff came with just 45 seconds to play when backup quarterback Bryan Gagg, making his collegiate debut, flipped a 5-yard touchdown pass to fellow freshman Jeremy Lewis, who played at nearby South Central High School.

That did little to soothe the mood of first-year head coach Mike Houston.

"Certainly disappointed with the outcome of the ballgame," Houston said. "That's not what we expect from ourselves. It's not what we want to be. Too many critical errors at the wrong time that we put ourselves in bad situations and did not take advantage of some opportunities we had. You can't do that if you're going to win a ballgame against a good football team in this conference."

USF staked its dominance up front on both sides of the ball, unleashing a potent running game with a mix of a trio of slippery quarterbacks and talented running back Jordan Cronkrite, then smothering the Pirates' efforts to gain any traction on the ground.

The Bulls finished with season highs of 525 total yards and 347 rushing yards. ECU managed just 62 yards on the ground through three quarters and finished with 102.

Cronkrite led the Bulls with 129 yards on just 12 carries, scoring on runs of five yards in the first quarter and 10 in the second. Freshman quarterback Jordan McCloud and his backups Jah'Quez Evans, also a freshman, and sophomore Kirk Rygol proved more than ECU's defense could handle.

The trio combined to rush for 179 yards on 14 carries. McCloud did all of his damage in the first half, rushing for 49 yards on four carries and completing 9 of 12 passes for 102 yards and a pair of touchdowns.

The fleet Evans, typically a wide receiver, threw the Pirates a curve with his appearance and raced for 99 yards on six carries, punctuated by a 53-yard scamper.

Rygol directed the USF offense the second half and finished with 31 yards rushing and 74 passing, capped off by a 24-yard touchdown toss to Terrance Horne early in the fourth quarter for a 45-10 lead.

"They had a good plan," Houston said. "When you have a quarterback run game, somebody's got to win because they basically have a hat for every hat that you've got, and the quarterback's the guy. That's what makes that style of a deal so tough to defend."

The Bulls broke off 11 plays of at least 10 yards and four of 30 or more. Houston said the result of some of those was poor tackling.

"We've got to improve our tackling," he said. "That was obvious to everyone in the stadium tonight. We did not do a great job tonight."

The Pirates also did not capitalize on scoring opportunities, scoring on just half of their six trips into the red zone - USF was 4-for-4. Perhaps the most critical misfire came when freshman Demetrius Mauney was stripped of the ball at the 11, where the Bulls' Devin Studstill recovered.

Houston reflected on a similar red-zone turnover at UCF that also swayed the momentum.

"Two turnovers in the red zone," Houston said. "You punch those two in, the tide of the game is completely different. We had opportunities to where it would have been kind of a blow-for-blow kind of deal. But we can't make those critical errors down there in the red zone. That's two weeks in a row we've done that."

Special teams did continue to give ECU a spark, accounting for its second touchdown this year and setting up another. The diminutive Snead, listed at 5-7 and 167 pounds, delivered the early fireworks with his return of the opening kickoff, finding a seam and navigating his way through Bulls' defenders for a 100-yard return - ECU's first kickoff return for a score since Lance Ray's 90-yard effort against Appalachian State Sept. 1, 2012.

But USF countered with a methodical 10-play, 75-yard drive that consumed nearly five minutes and zapped much of the homecoming day spirit.

"It was a great way to start the day," Houston said of Snead's return. "The stadium was electric. It was a great job by the return team, a great job by Tyler. We've been talking all year that we thought we had that ability. We've just got to keep working at it. It was good to see us finally make the play.

If we could have gotten a stop there on defense, what a way to start the game off. But I did think they took a little bit of wind out of our sails the way they drove the ball down and scored."

USF dominated the remainder of the half, building a 14-7 lead by the end of the first quarter then scoring three times in the second period. McCloud and Evans combined for 148 yards on just 10 carries in the opening half, and Cronkite added 91 yards on eight carries and a pair of touchdowns.

Two long possessions drained nearly the entire third quarter, but only the Bulls came away with points.

ECU opened the second half, forcing a punt with a three-and-out series then piecing together a 15-play drive that reached the one-yard line but failed to score after a dropped pass by tight end Anthony Watley on third down and a 3-yard loss on fourth down.

The Bulls countered with a 15-play of their own, chewing up 7:11 off the clock before settling for three points on a 24-yard field by Spencer Shrader.

Now the Pirates must regroup for a home game against nationally ranked Cincinnati next Saturday, another tall task in Houston's program-building process.

"None of us - players, coaches, none of us - accept this. This is not who we want to be. It doesn't take anything away from South Florida. They're a good football team. Obviously, they had some guys that had some big days for them. But we expect to compete at a higher level than this."