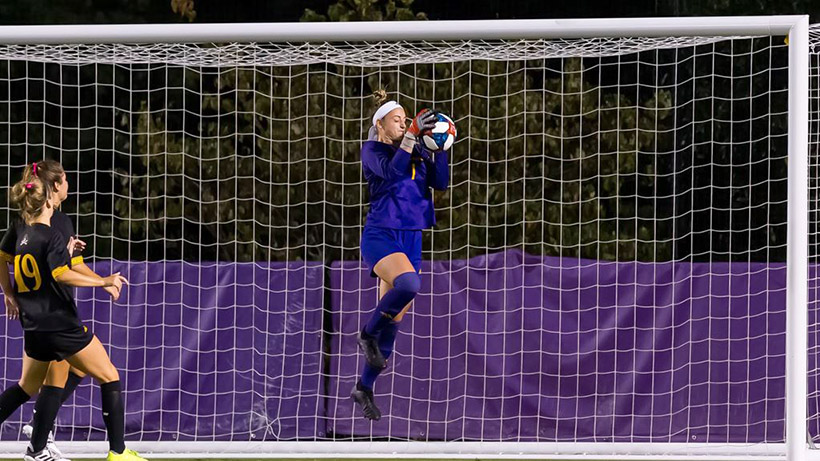 "We're really happy with how the team played tonight," said head coach Jason Hamilton. "I thought we fought and it was probably the best game we've played since playing Memphis. That's how we have to play to be in these games. Unfortunately, it's a game of inches and they took an advantage of an opportunity and put it in the goal. We had some really, really good looks and just couldn't put it in the back of the net."

UCF pressed the attack in the early going. The Knights forced ECU goalkeeper Melanie Stiles into a trio of saves within the first 15 minutes. However once the Pirates settled in, ECU allowed just two shots the rest of the half, neither of those on goal. The Pirates nearly had a goal of their own when Tori Riggs broke in behind the UCF defense, but her cross was just inches too high for a leaping Cashlin Copley.

"I thought the first half was pretty even as we battled," Hamilton said. "That was great to go into halftime tied 0-0. Then we talked about just coming out and continuing to fight and compete. We had a great second half, outshot them 9-5. Had a couple of corners and had some great services. We had a really great look in front of the goal and the ball bounced around and people got chances, we just couldn't find the back of the net."

The second half had three clear-cut scoring chances that ended up defining the game. The first came in the 53rd minute when Madison Murnin took a long range shot that appeared to be heading for the top right corner of the goal. But Stiles was able to leap to her left and get a hand to the shot, sending it over the crossbar.

Unfortunately for the Pirates, the next chance did turn into a goal for the Knights. In the 57th minute, a corner by Mollie Rouse floated to the far post and Kristen Scott was able to get just enough of a touch on it to score the game's opening goal.

ECU nearly tied the game less than a minute later. A ball was played into the UCF penalty area and Jenna Dages was able to find the space to take a shot. However, UCF goalkeeper Caroline DeLisle stopped Dages' first shot and then Dages' second effort was blocked by a defender. Cashlin Copley took a third straight Pirate shot, but her effort fizzed just wide of the left goalpost.

ECU kept pressing forward for the equalizer, with Lexi Moore and Erin Mikalsen each taking a shot that just missed the goal frame, but the Pirates could not get on the scoreboard before the final whistle.

Both teams took 10 shots, with UCF having a 5-1 advantage in the first half while ECU outshot the Knights 9-5 in the second 45 minutes. UCF finished with nine corners to just three for the Pirates. Stiles made five stops in goal for ECU with DeLisle finishing with two stops for the Knights.

"It's tough to work that hard and not come away with a result, but we've got to carry that momentum into Sunday's game and continue to compete because South Florida is another really good team," Hamilton added. "We've got to still scrape and try to get some points to get into the conference tournament."

The Pirates will play one more regular-season home match as USF is scheduled to come to Johnson Stadium on Sunday afternoon. That match is scheduled for 1 p.m., and ECU will honor its three senior student-athletes prior to kickoff.