House Redistricting Committee Considers Combining Plans, but Not Before 2021 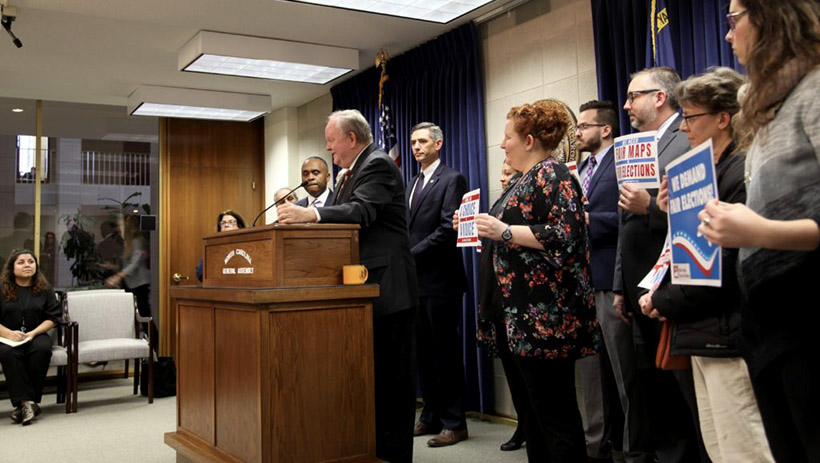 If the General Assembly learned anything from recent decades of redistricting battles, it's that the map-drawing process needs a thorough overhaul.

The House Redistricting Committee discussed several proposed redistricting plans Thursday, Oct. 24, intending to make the process as nonpartisan as possible. A timeline regarding a committee vote doesn't exist, and members adjourned without notice of a future meeting. Ideally, they'd have a plan around the time they receive new census data - no later than March 2021.

Rep. Chuck McGrady, R-Henderson, has pushed several redistricting reform bills over the past decade, and both of his current bills have the support of at least half the members of the House.

House Bill 140 would create a constitutional amendment, requiring voter approval, making it more difficult to repeal than a simple statute. Legislative staff would draw maps and submit them to the General Assembly for a vote. It would establish electoral districts not only for the House, Senate, and Congress, but also for local governments and boards of education.

The other widely supported bill, H.B. 69, would create an 11-member independent redistricting commission, including four members from each of the predominant parties, and three "unaffiliated" members. The commission would draw the plans, and the legislature would have the final decision.

Another bill, H.B. 648, would require a special master to draw two separate plans and submit them to an independent redistricting commission for a vote, before proceeding through the normal committee process. The commission would include 11 voting members and five non-voting alternate members.

Rep. Harry Warren, R-Rowan, who sponsored H.B. 648, says he prefers his bill over H.B. 69 because he's not confident "unaffiliated" always translates to "nonpartisan," when it comes to redistricting commissions.

Members admitted the bills aren't perfect, and they may combine elements of each.

One major difference among the proposals is the provisions for public input. H.B. 140 requires at least three public hearings, organized by a temporary redistricting advisory commission. H.B. 69 requires more hearings - at least 21 - across the state.

H.B. 648 contains no public input provision, and Warren said he believes 21 public hearings would prolong the process. He'd prefer instead to model public input from the process used by the General Assembly in September, when it redrew legislative maps. People then could view the process online.

Rep. Joe Sam Queen, D- Haywood, said September's experiment with public hearings was too rushed, and the legislature needs to make sure people throughout the state have time to take part.

Despite the differences, each bill requires the same map-drawing guidelines. They include the traditional rules requiring equal population for each district, compliance with federal and state law, limited division of counties and cities, contiguous districts, and reasonable compactness. To enhance nonpartisanship, it also includes provisions limiting the protection of incumbents - their addresses can't be considered as the maps are drawn - and use of political data.

The list of requirements includes a vague line about preventing favor toward political parties or "groups," noted Rep. John Szoka, R-Cumberland. He questioned whether "groups" could be defined as farmers, who make up a good portion of his district. Residents of Cumberland County and Fayetteville often disagree on water and public works decisions, and it's important to ensure protection for each group's interests by drawing fair lines, he said.

"We're all applauding ourselves when we get the highest or lowest number," he said, referencing computer-simulations that can produce a number score for different maps. "But that doesn't affect people on the ground."

Rep. Pricey Harrison, D-Guilford, briefly discussed a proposal for a citizen commission, H.B. 827. Commission members couldn't be current or recent elected officials, political appointees, major donors, or their relatives. They would propose maps for the legislature to consider. Committee chairman Rep. David Lewis, R-Harnett, initially omitted this proposal from consideration in the committee because it received less support than the others.

Redistricting has become an increasing challenge in the age of "big data," Queen said, and it's important to make the process fair.

"Citizens want their votes to be equal and matter," he said. "I think if we conduct ourselves well in this inquiry, we can build trust with the public."