The playoff race is starting to take shape and the ECU soccer team will try to maintain its spot when the Pirates take on UCF on Thursday night inside Johnson Stadium. east carolina university, ECU, women's soccer, gameday, UCF, october 24, 2019
Home
Categories
Login 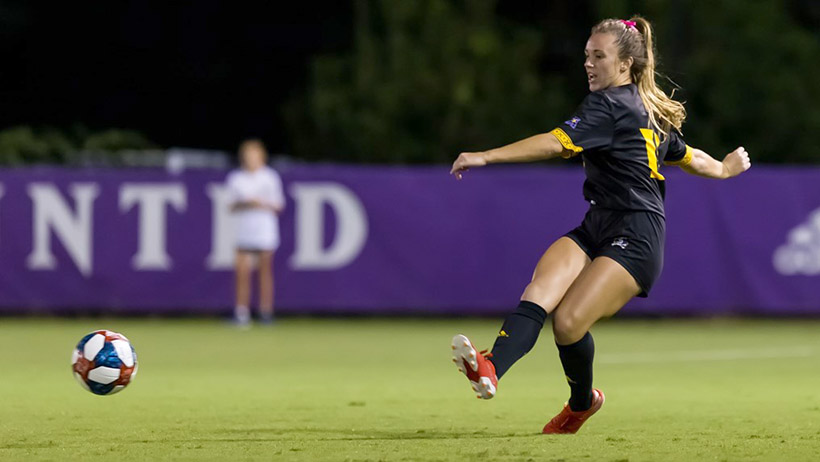 GREENVILLE, N.C.     The playoff race is starting to take shape and the ECU soccer team will try to maintain its spot when the Pirates take on UCF on Thursday night inside Johnson Stadium.

"This is a big weekend for us, we have two of the top teams in the conference coming to Johnson Stadium," said head coach Jason Hamilton. "UCF is coming off of two scoreless draws where they created a lot of chances. We have to be ready to deal with their dynamic attack. I can guarantee they spend a lot of time in front of the goal this week and will want to be more opportunistic against us."

ECU (5-8-2, 2-3-1 AAC) will try to get back on track at home after dropping a pair of matches in Texas. The Pirates are currently tied for fifth in the conference standings, but have two less games played than Connecticut and Temple. ECU will need to revive its offense which currently ranks sixth in goals per game (1.20). Tori Riggs leads the team with 10 points on four goals and two assists while Jenna Dages is right behind her with three goals and a pair of helpers. Daria Draovitch leads the Pirates with three assists. In goal, Melanie Stiles is third in the league with 69 saves so far this year and her save percentage of .829 in conference games is fourth in the AAC.

"We didn't have a good weekend in Texas and no one in the program is trying to hide that," Hamilton said. "We are now backed in a corner with three games left to play and needing results. We have to come out and be better defensively than we were on the road. This is a game where we have to have everyone step up and compete in order to get a result."

UCF (8-2-4, 3-1-2 AAC) comes into the weekend without a loss in its past five games. The Knights have not scored in their past two games though, playing to scoreless draws with both Temple and Connecticut. UCF dropped out of the top-25 polls and is now receiving votes in both the Top Drawer Soccer and United Soccer Coaches rankings. Konya Plummer and Caroline DeLisle were both honored by the conference last week, with Plummer named Defensive Player of the Week and DeLisle earning Rookie of the Week. DeLisle now has seven shutouts during her first season in Orlando. Offensively, Zandy Soree and Kristen Scott both have a team-high seven goals, with Soree adding an assist.

UCF has historically had the upper hand in the matchup, going 11-3-2 against ECU, but the Pirates did grab a 2-1 overtime road win last season. A late goal from Madie Knaggs tied that game at 1-1 before Riggs set Dages up to score the game-winning goal just 40 seconds into the extra period. It was just the first road win for ECU against UCF. The Pirates are 1-4-0 at home against the Knights, the lone win coming in 2015.

Kickoff is scheduled for 7 p.m., on Thursday night in Johnson Stadium and admission is free for all fans. Fans can watch the live stream HERE or follow the live stats HERE.