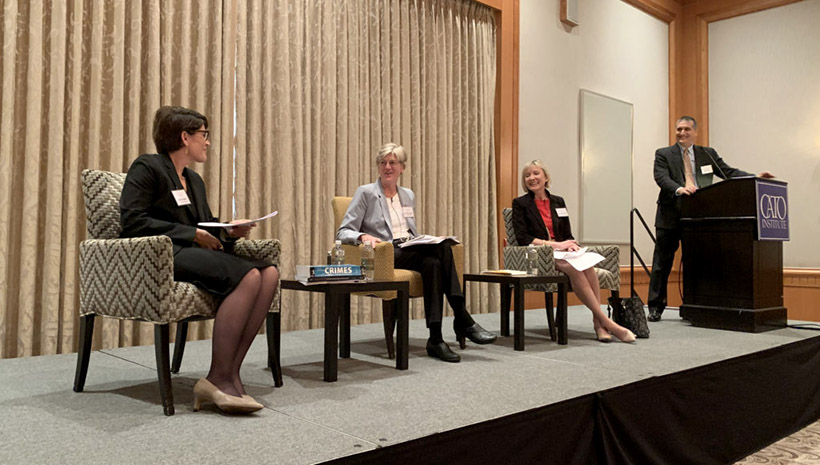 If North Carolina's nebulous criminal code isn't confusing enough, the "elephant" metaphors lawmakers use to describe them are even less enlightening.

At a reform-oriented summit hosted Monday, Oct. 21, in Cary by the Cato Institute and the John Locke Foundation, several lawmakers excoriated the state's criminal code, saying obsolete and duplicate statutes place harsh burdens on ordinary citizens. So far, they haven't proposed any concrete solutions or timelines.

In other words, it'll be a wild time for lawmakers if they try to tame the state's criminal code.

"We are going to need some strong members of the General Assembly who are willing to take this herd of elephants, gather them together, bite them into the small pieces, and feed them to the 170 cats that we have to herd in the General Assembly," said Rep. Sarah Stevens, R-Surry.

Chapter 14, the General Statutes chapter, is supposed to form the basis of the criminal code, but only contains 874, or one-third of the state's crimes, said Mike Schietzelt, legal fellow at the John Locke Foundation. The rest of the statutes are scattered across other chapters, making it impossible for the average person, or even lawyers, to keep track.

What's worse is the crimes often don't match the penalties. A person could serve 14 years in prison for bank and tax fraud, but seven years for the murder of an 11-month-old child, former state Chief Justice Mark Martin said.

In 2018, the General Assembly passed H.B. 379, which mandates that various state agencies provide a list of all statutes that are duplicated, inconsistent, obsolete, or unconstitutional. This year, S.B. 584, allowed the agencies a deadline extension.

Complete recodification is too massive a project to complete in a year, Stevens said, especially since, for her and other members, lawmaking isn't their full-time job.

"It's about having enough consistency and interest to get it done," she said.

Sen. Warren Daniel, R-Burke, hopes the process would only take two to three years, rather than five to seven.

"If you put us in a room for five months, we could figure it out, but we have time constraints," Daniel said.

He held up a stack of paper. "Here's one report that came to me in the last week. It's just one county, it's 16 pages," he said. "There are 99 other counties. How many more things are out there that need to be looked at?"

Rep. Ted Davis, R-New Hanover, suggested holding a committee during the upcoming interim between sessions that could possibly evolve into a permanent committee. He also suggested a joint-oversight committee might speed up the process.

Daniel said he would like the N.C. Association of County Commissioners and the League of Municipalities to take on the bulk of the project, rather than lawmakers.

The project is important because even one misdemeanor can deal a lifelong blow to someone seeking a job or opening a business, said Jessie Smith, professor of public law and government at UNC's School of Government.

Even worse, one wrong move can sometimes lead to four or five different charges, Smith said. Prosecutors have incentives to press multiple charges, because it encourages the victim to plead guilty and receive a lesser sentence. "Complexity adds costs in a really big system," she said.

Larceny provides one example of extraneous legal burdens. The criminal code includes some of the most bizarre forms of larceny, including larceny of pine needles, portable toilets, and recently, the Venus flytrap, thanks to a bill Davis himself helped pass.

"Let's have one crime: 'You can't steal other people's stuff,'" Smith said.

Davis defended himself on the Venus flytrap issue. "It was a good bill," he grinned, eliciting a chuckle from the audience. He added that the bill "probably didn't help" in mitigating the number of laws on the books.

Criminal law reform is a bipartisan issue. Rep. Marcia Morey, D-Durham, who also attended the event and previously served as a chief District Court judge, noted the opioid crisis has led to a lot of unnecessary criminal convictions.

"We need all systems to come together and help people with addictions and not just criminalize those who need help," she said.

Going forward, it's possible future legislators could undo the work of the former by further cluttering the code, Stevens said. That's why it's important to leave them with tools to identify those that may be unnecessary. Warren agreed.

"We need to make sure we're putting together committees that have a good balance of seniority and younger members so we have some people who are able to pick up the torch," he said.