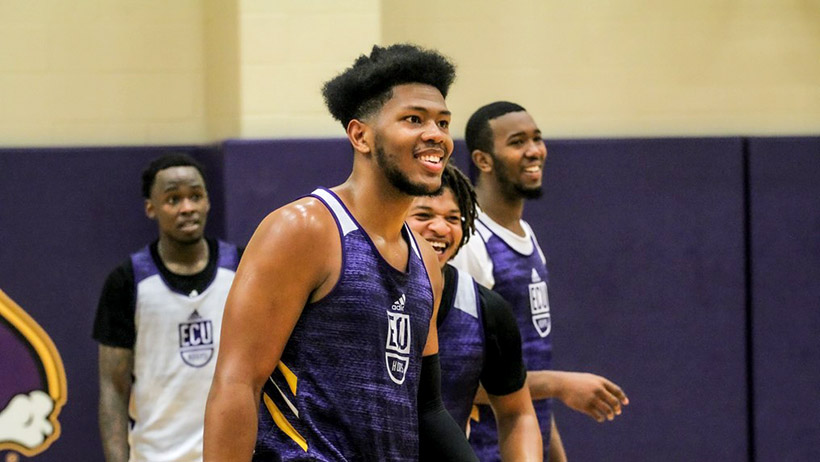 Almost everything is new regarding the ECU Men's Basketball program as second year head coach Joe Dooley and his players met with the media Tuesday.

Dooley and his staff revamped the roster after last year's campaign by adding 11 new players, including seven transfers and four freshmen. The Hoop Scoop ranked ECU's incoming class as the 10th best in the nation this summer.

"Our goal every year is to play in the NCAA tournament," Dooley said. "If it's not, we are short-changing our fans and ourselves. We feel like we've gotten bigger and more talented, so we think there are more pieces in place to achieve our goal."

"We've had excellent support from this community," Dooley continued. "We've had donors and businesses step up to help improve our facilities and we thank those people for doing that. Our fans want ECU to be good in all sports and they are waiting for us to get good. A good game-day experience usually comes with a good team. No one wants to go home sad after a loss. We're working every day to do that, and the fans will be there when we do."

The Pirates have the potential to match up better with conference foes because of their newly acquired height. Transfers Ludgy Debaut (7-0, 245, Jr.) and Edra Luster (7-0, 230, Jr.) along with freshman Charles Coleman (7-0, 255) give ECU three seven-footers for the first time in school history and help form the tallest overall roster ever.

"Our size gives us so many more options," Dooley said. "We could play small with anybody last year, but we couldn't really play big. When one of our bigger guys ran into foul trouble, we couldn't adjust effectively. We had Jayden (Gardner) or Seth (LeDay) trying to guard some of the big guys at Central Florida and Wichita State and it was fair to them. They did their best, but we should be in much better shape with that this year."

Gardner and LeDay are the only returnees from last season. Gardner, a 6'7 forward from Heritage High School in Wake Forest, led the Pirates in scoring (16.3 ppg) and finished second in The American with 8.5 rebounds per game. He led all Division I freshmen with 171 made free throws and was seventh in scoring and rebounding among first-year players. He also became the first Pirate since 1966 to score 30 points and grab 20 rebounds in the same game at UCF.

"Things are different and the same, if that's possible," said Gardner. "The system is the same, but there are more options. My teammates are different and more versatile, and we are a taller team overall. It's like my freshmen year all over with getting to know my teammates, but I also understand what is expected. I'm trying to develop a leadership role, so that's different as well."

LeDay has been limited during the preseason as he continues to recover from a knee injury suffered at Wichita State in the penultimate game of the regular season last year. He was third on the team in scoring (11.0 ppg) and was second among the Pirates in rebounding (5.8 rpg), assists (1.5 apg), steals (1.4 spg) and blocked shots (0.8 bpg).

"We have enough talent to compete in this league," said LeDay, who transferred from Virginia Tech. "it just takes time to put all the pieces together, but we've made a lot of progress since the first practice. Jayden and I know what the coaches expect, so we're trying to bring the new guys along. We can have a lot of different looks on the court. We can go all big or any combination of big and small. We'll be ready to go when the season starts."

The Pirates open the season at home against VMI on Nov. 5, then play six of the next seven away from Minges Coliseum. ECU visits Navy as part of the Veteran's Classic and Appalachian State, followed by a three-game trip to Nassau, Bahamas, before wrapping up its non-conference road schedule at James Madison.

"I think we will find out about ourselves pretty early," Dooley said. "Six of the first seven on the road is probably not the way you want to start with a new team, but we're home the whole month of December to get ready for conference play.

"We are excited to get started."