Building on Barrier Islands: Should We Stay or Should We Go? | Beaufort County Now

Building on Barrier Islands: Should We Stay or Should We Go? 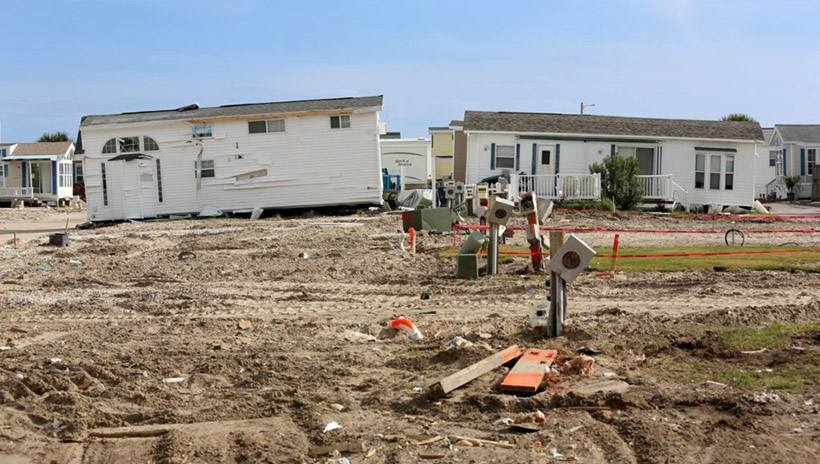 Taking one look at Google maps, it's easy to see why North Carolina endures more hurricane damage than some other states along the Atlantic shore. Not only does the mainland jut out farther into the ocean, but it's also surrounded by a much wider fringe of offshore sands - known as barrier islands.

To many North Carolinians, barrier islands are vacation resorts, or in some cases, permanent homes. But they're also in a constant state of flux, as Hurricane Dorian demonstrated this summer when it surged across Ocracoke Island. The millions of taxpayer dollars it takes to rebuild housing and replenish sand on the beaches have led some experts to advocate for more locally based financial responsibility, or even a human retreat from the coastline altogether.

Even the name, "barrier islands," suggests they're better operating as environmental shields than permanent beach resorts.

North Carolina's coastline is composed almost entirely of barrier islands, and they're particularly susceptible to huge storm surges, such as Dorian, explained Orrin Pilkey, professor of geology and earth and ocean sciences at Duke University. When a hurricane first comes in, it pushes water into areas behind the barrier islands, like the Pamlico or Albemarle sounds. When the hurricane leaves, it rushes over the islands from behind.

"All that water comes roaring back," Pilkey said. "And that's what did all the damage on Ocracoke Island. The water was flooding from behind."

Barrier islands also protect North Carolina's marshes and lagoons - located between the islands and mainland - from ocean waves and saltwater, said Rob Young, a geology professor at Western Carolina University. Those habitats are important to the fishing industry, specifically shrimp, crabs, and oysters.

Barrier islands form when sea levels rise, Pilkey said. When water flows into the mainland, it floods the valleys and makes the ridges stick out, chiseling the shoreline into an irregular shape. The water then erodes the ridges, causing sediment to trickle out from the mainland to form new bodies of sand that eventually become islands.

Today, 98% of beachfront homes in North Carolina are investment properties, or resort communities, not primary residences, Young said. That sort of vacation development didn't occur until around the 1960s and '70s. Previously, people lived on the islands in small fishing or whaling communities. Native Americans also used to inhabit the islands, albeit seasonally, Young said.

Barrier islands don't naturally stay in one place, due to waves and storms that move the sand. So today, with gigantic vacation homes to maintain, the federal government and state governments along the Atlantic coast are constantly funding "beach-nourishment" projects to preserve the shifting shoreline. These involve pumping up sand from North Carolina's continental shelf - the shallower area surrounding the coast - onto the island.

These projects are happening constantly, Young emphasized. If a bad storm comes immediately after a project, the new sand could disappear in a couple of months. Pilkey estimates nourishment projects cost a million dollars or more per mile and last an average of three years.

Another solution to shifting coastlines would be seawalls. The problem is, the water will continue to erode the beach until all the sand is gone, Pilkey said. Regardless, seawalls are illegal across the Carolinas and other Atlantic coast states, with occasional exceptions.


Who pays the bills?

This all leads to the big political question: Who should be held responsible for the shoreline maintenance? Should the locality pay for its own risk, or should the risk be transferred to the public sector, where federal taxpayers can fund the projects?

The latter is largely the outcome, and it only incentivizes people to continue building in risky areas, Young says. If left to the localities to cover, the market might naturally rule out a lot of barrier island property as too risky.

"So, many times, these communities make this argument to their congressional delegation. They say, 'We're really important to the economy, so you need to support us with these federal dollars and projects and things like that.'" Young said. "That's not how that's supposed to work."

Many taxpayers think the system is unfair, Pilkey said.

"More and more, the attitude of the taxpayer in North Carolina is becoming, 'Why should I pay for beach nourishment? I wasn't imprudent enough to build a house right next to an eroding shoreline,'" he said.


The risks of staying put

Pilkey says residents who live next to the beach need to be prepared to move or abandon the structure.

"I think the general response has always been, 'We're not scared of this storm. We're going to rebuild and rebuild better.'" he said. "The tendency is not to move unless the house is really destroyed."

He finds it "distressing" to see the number of homes damaged by homes that are insured by the federal government on multiple occasions.

"It is a form of madness, in my opinion, to think we can hold the shoreline still," Pilkey said.

Although Hurricane Dorian flooded several homes and businesses on Ocracoke, it's not one of the more heavily developed parts of the shoreline, Young said. And overall, despite the intensity of the storm, Hurricane Dorian only minimally affected most North Carolinians.

"They should remember that it's going to happen again, and we're not always going to be so lucky," Pilkey said. "We were very, very lucky on this one."