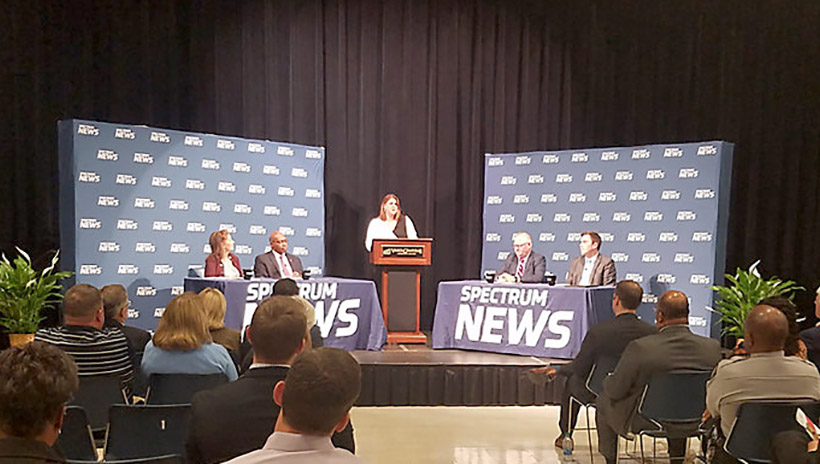 The Hometown Debate Series concluded Thursday, Oct. 17, in Henderson, as legislators and policy advocates debated the delivery of medical services.

Panelists on Thursday agreed no one-size-fits-all solution exists to fix health care in N.C. There was, however, spirited debate regarding the best direction forward.

"It's very difficult," said Rep. Donna White, R-Johnston. "We've lost 28% of our primary care physicians in the state in the last two years, and a lot of those have been lost in rural areas."

White, a registered nurse, suggested taking advantage of advanced practice registered nurses to supplement the loss in primary care physicians. APRN's receive graduate-level training in specialized areas of medicine, qualifying them to perform some of the responsibilities traditionally reserved for medical doctors.

"We've been trying to work a bill through the General Assembly for several years now called the SAVE Act," White said. "In North Carolina ... we have to have other options because we cannot get enough primary care doctors."

The SAVE Act, which stands for Safe, Accessible, Value-directed, and Excellent care, would grant full practicing authority to APRN's in the state. They wouldn't need doctor to supervise their work or give a formal OK before the specialized nurses could perform medical procedures.

"The rural issue is more about the economics of practicing, and it really does come back to Medicaid expansion," said Griggs. "In states that have expanded Medicaid, you're 84% less likely to lose a rural hospital."

"I think moving forward we are going to have to figure out better ways to serve rural communities, especially as more people move into urban communities," said Roberts. "I think that's one of the reasons why letting the market flourish [and] allowing demand to be met on its own will be important in the future."

"There's one thing that I think we can do better across the state, and that's invest more in primary care," said Griggs. "[W]e only invest about 6% of a health care dollar into primary care. Primary care can be a great way to prevent cost down the road."

Generally, health care costs are lower for people who have a primary care physician. Primary care is almost always cheaper than seeing a specialist.

Roberts agreed with Griggs about the importance of primary care; he also addressed the decline of independent physicians in the market.

Throughout the debate series, telemedicine was continually discussed as one way to bring more primary care to rural N.C. Panelists agreed on the importance of expanding telemedicine.

But panelists acknowledged an unintended consequence: Telecare may cause problems, including overprescription of drugs.

"We can't diagnose an ear infection or a sinus infection without ... doing a physical exam," said Griggs. "We've got to be careful that we don't use telemedicine as a crutch, and all of a sudden we're overprescribing antibiotics and we're having more and more antibiotic resistance. ... We've got to balance how it's used."