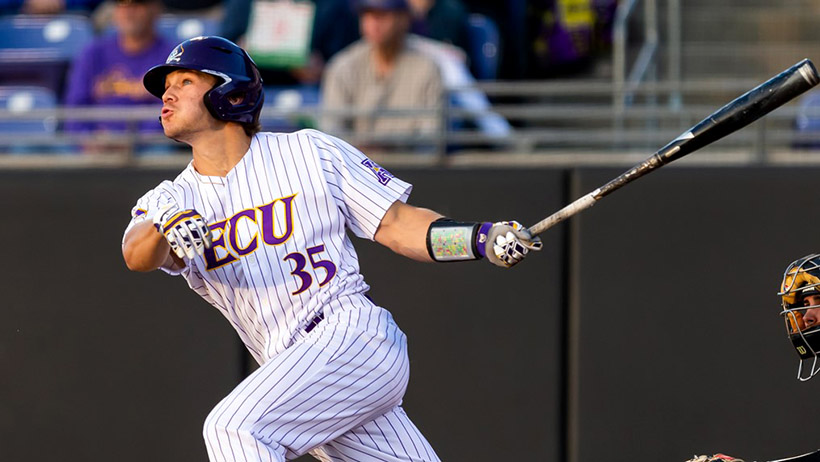 GREENVILLE, N.C. — In the final intercollegiate game of the fall season, East Carolina topped Liberty 12-6 in a predetermined 14-inning exhibition at Lewis Field inside Clark-LeClair Stadium on Saturday afternoon. The Pirates will resume its fall schedule leading up to the annual Purple-Gold World Series, which is set to begin on Friday, Nov. 1.

Worrell got things going with a double down the right field line in the second inning that scored Trevor Losito for an early 1-0 lead. Burleson's RBI single to right pushed across Lane Hoover and Thomas Franscisco followed with a two-run homer that extended the Pirates' lead to 4-0 after three frames.

Gavin Williams got the start on the mound where he worked 3.1 innings allowing a pair of runs (both earned) on two hits with a walk and five strikeouts. Liberty scored a pair of runs in the fourth and one in the sixth pulling within one, 4-3. The Flames platied a pair in the fourth on RBI hits by Will Wagner and Garrett Wilkinson and one in the sixth on Brady Gulakowski's double.

ECU responded with three in the bottom of the sixth pushing its lead to 7-3. Worrell's RBI single to right plated Connor Norby and Caddell followed with a two-RBI double through the left side pushing across Charlie Larson and Worrell.

Liberty scored a pair in the seventh and one in the 10th pulling within one, 7-6. But the Pirates scored five runs over the final two frames capping the scoring at 12-6.

Ten Pirates registered at least one hit on the afternoon led by Worrell's four, who also drove in a game-best four runs. Burleson, Caddell, Hoover and Norby joined Worrell with multiple hits in the contest.