Pirates Show No Quit in Loss at UCF 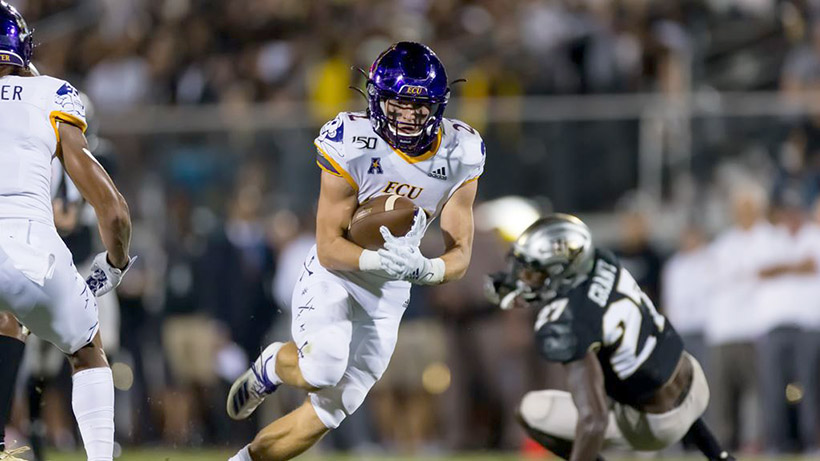 ORLANDO, Fla.     East Carolina didn't leave Spectrum Stadium late Saturday night with what would have ranked a monumental upset. It did come away with a feeling that it is gaining ground on the team that has reigned as king of the American Athletic Conference.

After a first-half blitz that gave UCF a seemingly insurmountable lead and sent much of a crowd of 42,906 home giddy and already celebrating a homecoming victory, the gritty Pirates of first-year head coach Mike Houston controlled the final two quarters before bowing 41-28.

The Pirates (3-4, 0-3 AAC) outscored the Knights (5-2, 2-1 AAC) 22-6 in the second half of a nearly four-hour game that sputtered along due to multiple injuries and 20 penalties. The determined finish encouraged Houston, even conjuring up thoughts of what might have been with more fruitful trips into the red zone and a couple of misfires on two-point tries.

"We ran out of time," Houston said. "We just couldn't convert enough there in the second half. We had our shots. I wish we just had a couple of those chances back there in the red zone. That up-tempo, high-tempo offense that everybody was worrying about, they're having to milk the clock there at the end of the ballgame to put it away. If nothing else, I think our team has shown this ain't the old ECU."

UCF showed early that it stills belongs among the nation's elite, and the Knights seemed intent to prove that point after a bye week in which they had to stew over a second loss in the last three games - the first time with multiple losses in a season since 2016 - and being out of the Top 25 for the first time in 33 polls dating back to Week 6 of the 2017 season.

UCF came in ranked third in the nation in total offense and did nothing to threaten that standing, amassing 611 total yards (414 through the air) despite a sluggish second half. The Knights piled up 245 of those yards in the first quarter en route to a 21-3 lead and had 408 yards and a 35-6 advantage at halftime.

Freshman left-handed quarterback Dillon Gabriel turned in a splendid first half before showing some shakiness under relentless defensive pressure from the Pirates in the second half. Gabriel finished 22 of 35 for 365 yards and a pair of touchdowns - a 53-yarder to Tre Nixon and 16-yarder to Gabriel Davis. Davis also hauled in a 33-yard scoring pass from Darriel Mack Jr. as part of his big night (nine catches, 164 yards).

ECU matched UCF with 31 first downs and finished with 483 yards after cranking out 322 in the second half. Sophomore quarterback Holton Ahlers completed 23 of 37 passes for a season-high 313 yards with one touchdown and one interception, teaming up with former high school teammate C.J. Johnson eight times for 106 yards - his second straight game eclipsing 100 yards. Tyler Snead added four catches for 84 yards and a touchdown.

UCF scored on its first five possessions while maintaining a dizzying pace, staggering the Pirates with their fast tempo and dynamic team speed. Four of those scoring drives required 2:07 or less, with the Knights striking for a bevy of chunk plays (17 plays of 10 or more yards - 13 passing and four rushing).

Even nine penalties for 79 yards and injuries to a pair of offensive linemen did not derail the Knights' momentum.

UCF zipped 96 yards in nine plays on its opening possession, highlighted by a 52-yard pass from Gabriel to junior wide receiver Marlon Williams to the ECU 1. Gabriel, who completed all four of his passes for 90 yards on the drive, took care of the final yard for his second rushing touchdown of the year.

The Knights quickly pushed the lead to 14-0 with 5:30 left in the quarter with a 79-yard, eight-play drive. Gabriel completed four more passes on the drive before junior running back Greg McCrae waltzed in from the 5.

UCF found itself backed up to its 2 on the next possession but got a boost from a third-and-18 defensive holding penalty. The touchdown came just two seconds before the end of the first quarter on a 32-yard dash on fourth-and-4 by sophomore Bentavious Thompson, scoring on the first play after replacing an injured McCrae.

The Pirates then pieced together their first scoring drive, reaching the UCF 7 before calling on Jake Verity to boot a 25-yard field goal and trim the margin to 21-3.

UCF answered with a pair of lightning-quick scores to push the lead to 35-3. Mack, who led the Knights' win in Greenville last season, came in and followed a 3-yard keeper with a 33-yard scoring pass to Davis to cap an eight-play, 84-yard drive that took just 1:36. Gabriel hooked up with Nixon for 38 yards on the first play of the next possession then tossed 16 yards to Davis for the score and a 35-3 lead.

ECU ended the half on a positive note, forcing UCF's first punt, then driving from its 4-yard line for a 40-yard Verity field goal as time expired. Ahlers was sacked on a third-down play with clock ticking below 10 seconds, but the field goal unit scrambled on and got set in time for Verity to convert his second of three field goals on the night.

The confidence boost carried over in the second half and never subsided, with the specials teams and defense paving the way for scoring opportunities. Leroy Henley delivered first, following a quick three-and-out with ECU's second punt block of the year. Jsi Hatfield scooped up the ball and returned it to the one, where Mauney cashed it in to make it 31-13.

"We decided going into it that if we got the right opportunity we were going after it," Houston said of the punt block. "That was the perfect opportunity. You never know who is going to come free, and Leroy did this week and made a great play."

The Pirates threatened again on their next possession, marching to the UCF 4 before settling for Verity's 23-yard field goal. AAC sack leader Kendall Futrell had ECU back in business six plays later, dropping Gabriel for an 11-yard loss and forcing a fumble that Alex Turner recovered.

Ahlers threw a 13-yard strike to Johnson on third down then scored on a 20-yard keeper to draw the Pirates within 35-23.

UCF's lone spark of the second half came four plays later when Gabriel and Nixon teamed up for a 53-yard touchdown pass, stretching the lead to 41-22. The Pirates could not convert after stuffing the Knights on fourth down but added a final touchdown on Snead's juggling touchdown catch with 1:38 to play.

"I'm really proud of the kids the second half," Houston said. "We've just got to get where we finish the ballgames with a win. But we're getting better."