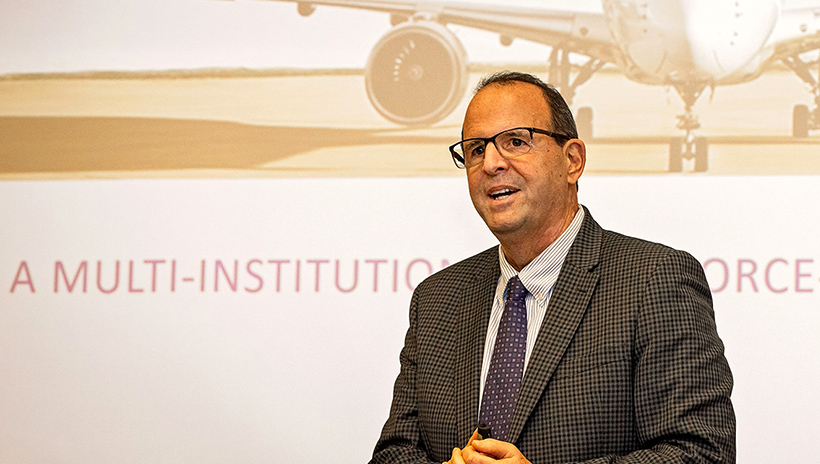 ECU Vice Chancellor Jay Golden unveils the university’s proposal for an aviation institute of excellence. The institute would establish a public-private partnership with the goal of expanding the regional aerospace industry and creating spinoff companies through workforce development, applied learning and research. | Photo: Cliff Hollis

East Carolina University will explore the potential for an aviation institute of excellence after listening to feedback from academics, industry leaders, economic directors and government representatives at a workforce development round table Oct. 11 at the East Carolina Heart Institute.

ECU's proposed aviation institute of excellence would establish a public-private partnership with the goal of expanding the regional aerospace industry and creating spinoff companies through workforce development, applied learning and research.

"We need to pull together resources from across eastern North Carolina's geography, military and educational resources to work together with new and established industries that support aerospace in the region," Golden said.

"Whether that means providing new smart manufacturing opportunities, offering micro-certifications in specialized training courses, or developing innovative ways to tackle cybersecurity and artificial intelligence, we need to establish a partnership that's nimble enough to meet the changing dynamics of the aerospace sector."

North Carolina is the second fastest growing aerospace cluster in the country with more than 200 related companies in the state, according to the Economic Development Partnership of North Carolina.

Brian Black, senior site leader of human resources, environmental, and health and safety at Spirit's Kinston site, said that despite the industry's growth, efforts must be made to close the skill gap between his industry's needs and the region's work force.

"We've started the community conversation about building an aviation talent pipeline for the future," Black said. "We have some immediate talent acquisition needs, but we can weather that. What I'm more concerned about is being able to demonstrate to our leadership and our customers that we're building a path that produces highly skilled workers in North Carolina."

Nearly 70% of Spirit's workforce demand is in manufacturing that traditionally requires a technical certificate, not a four-year bachelor's degree.

Roundtable participants echoed Black's workforce sentiments, but also shared additional concerns ranging from a lack of infrastructure, a scarcity of complementary jobs for spouses, and a lack of collaboration between aerospace entities in the region.

"Finding solutions to these problems is paramount to the economic vitality of eastern North Carolina," Black said. "We began that journey today. What was encouraging was that we didn't hear anything about turf. We didn't talk about how great we all are; everyone was truly here to listen, provide ideas and begin to act. We're ready to move forward."

Golden suggested that for its next step, the group create an internal facing document of the current status of the aerospace sector in eastern North Carolina.

Successful aviation research institutes have been implemented in other states, including at American Athletic Conference member Wichita State.