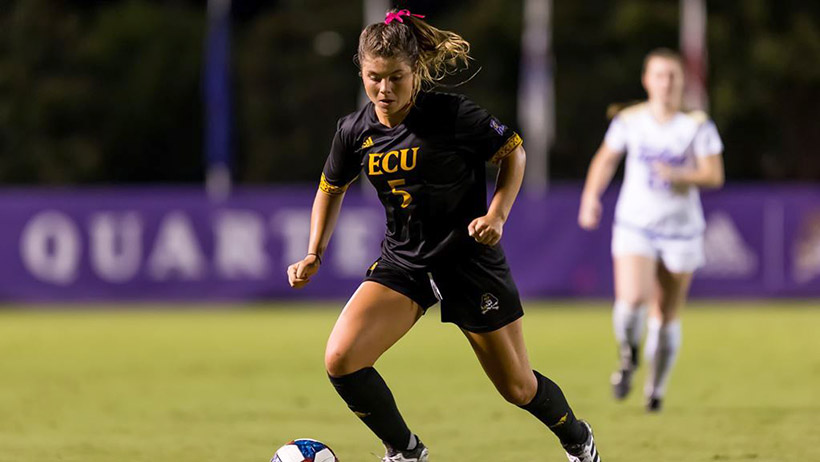 HOUSTON, TEXAS     A goal in the first overtime was the difference as the ECU soccer team dropped a 1-0 contest at Houston on Thursday night.

"I think all of us, including the team, are disappointed in this game," said head coach Jason Hamilton. "It's up there as one of the worst we've played all season. We didn't play as a team and we made it harder on ourselves than it ever should have been."

ECU falls to 5-7-2 overall this season and 2-2-1 in conference play. Houston improves to 4-11-0 and 1-4-0 against AAC opponents. It is the second straight season the Cougars have topped the Pirates in overtime.

Over the first four conference games, ECU has allowed just two goals despite opponents taking 50 shots across the four contests. The Pirate defense has stood strong by limiting the quality of opponents' chances and they did so again on Thursday. The Cougars took 12 shots during regulation, but just four of them were on frame. When those four shots were on goal, ECU goalkeeper Melanie Stiles was there to make a stop.

However, ECU just as stifled at the other end. All six Pirate shots were on goal, including multiple from inside the Houston box, but each time those efforts were stopped by Houston goalkeeper Sammy Cude.

After 90 minutes, the game remained scoreless, sending ECU to overtime for the third time in five conference games and for the second consecutive match.

Unfortunately for the Pirates, Houston struck first in the extra period. A Houston corner kick saw the ball drift out to the top of the ECU box. It was played back deep into the Pirate penalty area and during a scramble for the ball, Nolin Packer was able to pounce on it and flick a shot past Stiles and in for the game-winning goal.

"We are at a point in the season by now that we should know you have to outwork your opponent," Hamilton said. "We saw that last week and that is what earned us two results. We were beat to first and second balls, they were tougher than us on tackles and they deserved the game."

"It's a game of inches and you have to be very disciplined in order to have things go in your favor," Hamilton added. "We lacked discipline significantly today and that is something we will have to address over the next couple days if we want to get a result on Sunday."

ECU will next head to Dallas for a Sunday matchup with SMU. That game will be streamed on the American Digital Network with kickoff scheduled for 2 p.m., Eastern.